The West Hollywood City Council will receive an update on sexual assault reporting and procedures at the next regular city council meeting on Tuesday, January 18, 2022.

According to the victim’s account, Cedars Sanai does not conduct rape kits and a deputy at the West Hollywood Sheriff’s Station suggested he had too much to drink, could have a drinking problem, and he was discouraged from filing a police a report.

Staff will discuss a chart of West Hollywood Station Incidents where victims believed their drink was spiked. The data contained within this chart was originally provided by the West Hollywood Station of the Los Angeles County Sheriff’s Department and was an attachment to a City Council Memorandum on September 16, 2021. At that time, the data did not include a Result column with context about the disposition of each incident. Disposition status was subsequently added, and a revised chart was completed in December 2021, which provides additional information. In sum, results indicate that three (3) cases were filed with the District Attorney’s Office and one case is active.
Los Angeles County Fire Department 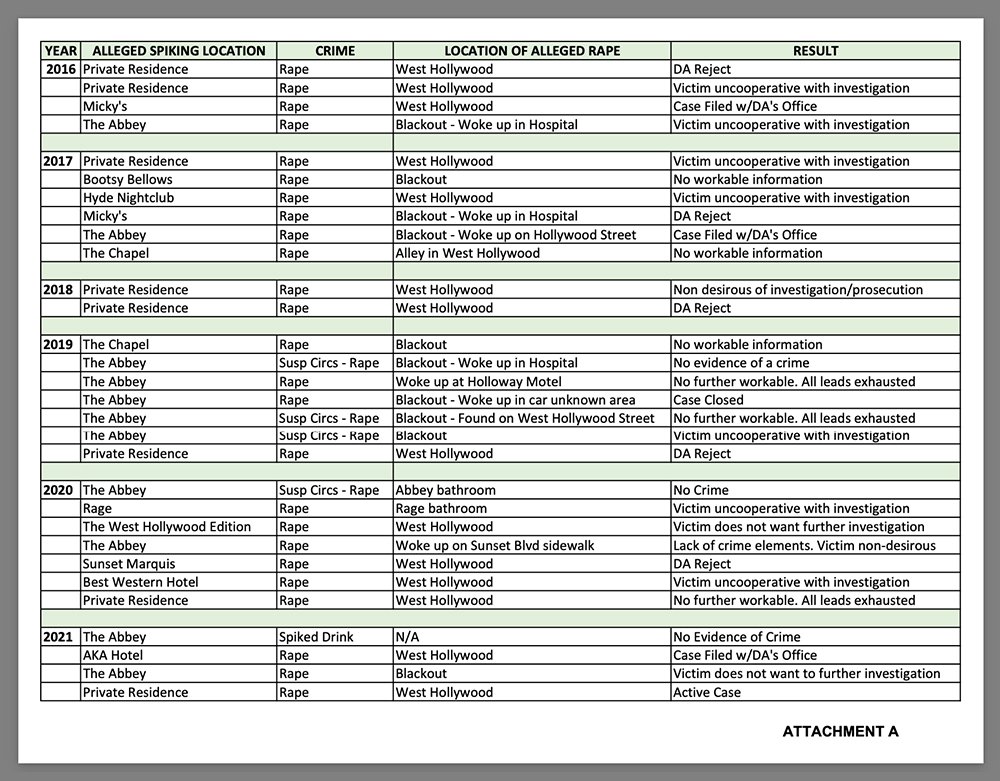 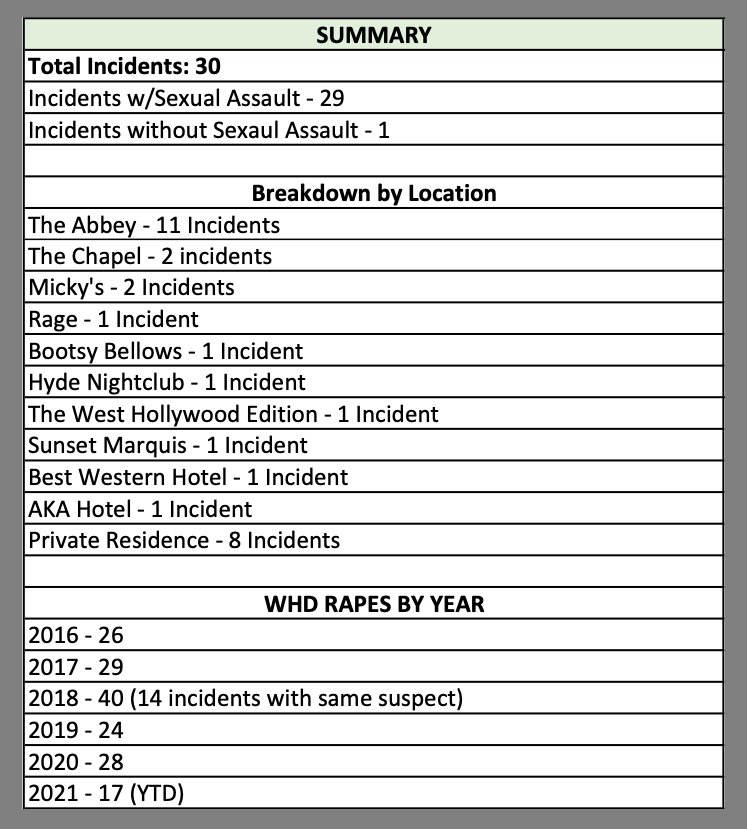 Prevention and identification of these situations are discussed, and nightlife establishments are encouraged to report any suspicious activity to the West Hollywood Sheriff’s Station.

According to the Los Angeles County Fire Department’s Medical Director, all paramedics are mandated reporters if they suspect any type of assault or abuse while responding to an EMS call. If the paramedics on scene find any evidence of an assault; or if the patient (or anyone) mentions anything about an assault – the paramedics would immediately notify law enforcement. Then the patient would be transported to the nearest hospital, and this information would be communicated to the receiving hospital staff. Westmed/McCormick is the provider assigned by the County of Los Angeles EMS Agency to provide ambulance transport for the City of West Hollywood. While Los Angeles County Fire Department paramedics take the lead on patient care, Westmed/McCormick paramedics and/or EMTs work in partnership with Los Angeles County Fire personnel.
Cedars Sinai Medical Center

The City Manager and staff met with personnel from Cedars Sinai Medical Center to discuss care for patients who are victims of sexual assaults. According to the Co-Chair of the Department of Emergency Medicine, the immediate role of the medical staff in the emergency room is to care for medical needs and to preserve forensic information. If a patient, or first responder transporting the patient, reports an assault, medical personnel first check for emergency medical conditions. Medical personnel also notify the law enforcement agency in the jurisdiction where the assault occurred. If there are no emergency medical needs, the patient is discharged and transported by law enforcement to the Santa Monica Rape Treatment Center which has the expertise to perform an appropriate forensic exam and manage both the immediate and long-term care (medical and psychological) needed by the patient. The patient can also choose to drive or provide their own transportation. Severe injuries are rare thankfully, but can lead to the hospitalization of the patient, including in the Intensive Care Unit. In this situation, the on call Sexual Assault Response Team (SART) responds to do an evaluation and rape kit in the hospital. It should be noted that most drugs cannot be tested for easily, including GHB.