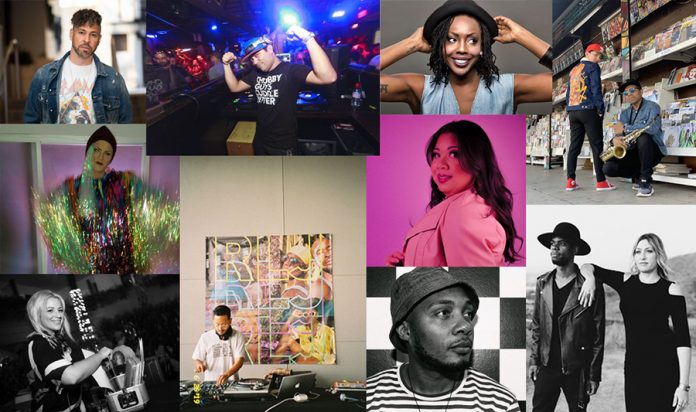 The City of West Hollywood is launching 2021 WeHo LIVE! The virtual Friday Happy Hour music series will kick-off on Friday, July 2, 2021 at 6 p.m. and return every Friday evening in July, August, and September.

This Friday, DJ Asha starts the music set. ASHA is respected globally as a sassy, crowd-pleasing, and ultimately entertaining DJ and producer. Regularly spinning in London, Australia, Croatia, Dubai, Greece, Ibiza (for P. Diddy), Italy, and Russia, she will be spinning a selection of Party Anthems, Dance, and Top 40.

The second DJ in the 2021 2021 WeHo LIVE! series will be DJ Mamabear on Friday, July 9, 2021 at 6 p.m. Mamabear is the hostess of The Honey Pot on Dublab radio and a member of the illustrious Sweaterfunk crew, San Francisco’s finest purveyors of ’80s boogie on vinyl. With Mamabear at the controls, expect to journey into a deep groove, where the energy is flirtatious and the soul is sassy. She will be spinning a selection of Funk, Soul, and Dance.

On Friday, July 23, 2021 at 6 p.m. City of West Hollywood resident, multi-award winning, Billboard-charting Dance producer for Madonna, Pet Shop Boys, Sam Smith, and KISS, Veteran DJ Casey Alva spins. Alva is the 20-year resident DJ at The Abbey and has toured the world. Alva is an Out & Proud Gay DJ and takes pride in the LGBTQ+ community. “Music runs through my veins. When the music matters, #NightlifeIsYourFriend.”

DJ Trauma headlines the Friday, July 30, 2021 music set. DJ Trauma is a true visionary and artist, creating, producing, and spinning his unique mix of hip hop, R&B, commercial dance, and Top 40 hits for crowds across the globe. He is currently on tour with comedian Dave Chappelle. He has toured globally with a variety of artists, including Tiffany Haddish, Ciara, Monica, and Keri Hilson. Most recently he DJ’ed celebrity events for Jay-Z, Serena Williams, and Beyoncé.

Friday, August 6, 2021 at 6 p.m. will feature Sloan & Sinclair. Lady Sinclair is a highly sought-after professional DJ who has played for the Oscars, Coachella, Dior, and Sundance. Ian Sloane is a professionally trained musician who has toured with Lady Gaga, Caught a Ghost, and Pigeon John. Together, Sloane & Sinclair’s DJ sets become a show with handpicked, curated playlists, and live drums that create live remixes, and pure energy. They will be playing a selection of House, Disco, and Indie.

Friday, August 13, 2021 at 6 p.m. will feature DJ Phatrick. DJ Phatrick is a Chinese American DJ and producer with over 20 years’ experience spinning parties, commanding stages, and crafting songs. When he’s not being a full-time dad, you can catch Phatrick rocking dance floors at Motown on Mondays, on the airwaves co-hosting Heartbreak Radio, or on stage backing up rapper Bambu.

Sindri will spin on Friday, August 27, 2021 at 6 p.m. Sindri is a DJ, artist, and event producer whose roots in nightlife began in the California Bay Area during his teenage years throwing underground raves at beaches and warehouses with his friends. After moving to San Francisco in 2001 he quickly became an integral part of the queer party scene. His love of house, disco, Italo, funk, and techno has landed him gigs across the globe such as Horse Meat Disco London, Honcho Pittsburgh, Deep South Atlanta, and Vujaday Barbados, to name a few. Now residing in Los Angeles, Sindri continues to devote his life to music and club culture.

Friday, September 24, 2021 at 6 p.m. will feature d. painter, an LA-based DJ by way of Washington DC. d.painter, has developed a brand working his way through clubs from Santa Monica to Downtown LA and weekly on KPFK 90.7FM radio in LA. He’s provided the soundtrack for A-list celebs from the Kardashians to David Beckham in addition to residencies at acclaimed bottle service spots and trendy speakeasy bars. As a promoter (FADE L.A., World70, X.O.) he’s curated discrimination-free environments for anyone who wants to dance away their stress all night to Latin, disco, reggae, R&B, and house music. He will be spinning a set of ’80s, dance, and new wave music.