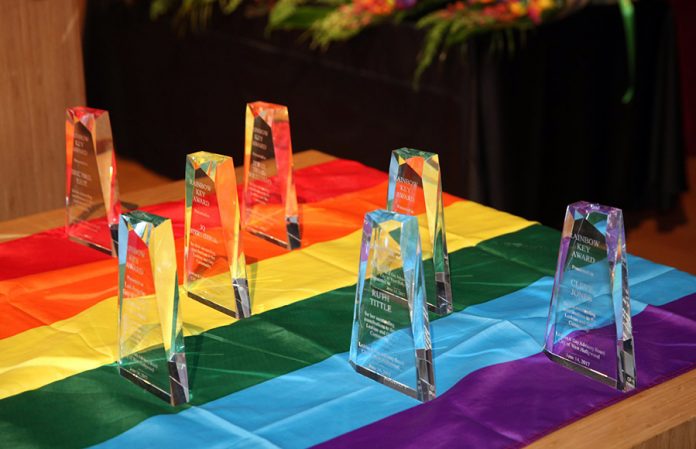 The City of West Hollywood has set a date to host a joint ceremony of the annual Rainbow Key Awards and Etheridge Award to recognize people and groups who have made outstanding contributions to the gay and lesbian community. The awards ceremony will be held virtually via the Zoom platform on Thursday, August 19, 2021 at 6 p.m.

This year’s Rainbow Key Awards/Etheridge Award will be held virtually via the Zoom platform on Thursday, August 19, 2021 at 6 p.m. Details for registering and live-viewing of the ceremony via Zoom are available by visiting the City’s website at www.weho.org/rainbowkey. Following the event, the ceremony will be made available for replay viewing on the City’s WeHoTV YouTube channel at www.youtube.com/wehotv.

Each year, the West Hollywood City Council selects award recipients following recommendations made through a nomination process overseen by the City of West Hollywood’s Lesbian and Gay Advisory Board (LGAB).

This year’s Etheridge Award will be conferred to legendary LGBTQ+ rights activist and outgoing CEO of the Los Angeles LGBT Center and the former CEO of the National Gay and Lesbian Task Force, Lorri L. Jean, for her relentless advocacy and tireless efforts on behalf of the LGBTQ+ community.

The Etheridge Award was established by the City of West Hollywood’s Lesbian Visibility Committee, a committee formed to support and promote activism, creativity, and community for Lesbians. The Etheridge Award honors a woman who has made a significant impact within and for the Lesbian community and was first presented to singer-songwriter and activist Melissa Etheridge in 2007. Later, Ms. Etheridge agreed to the Committee’s request to create an award in her name because of her commitment to furthering women’s health and fostering visibility and support for the Lesbian community. In conjunction with her award, she was featured in a public service announcement created by the City of West Hollywood. The Etheridge Award has been presented to the following individuals and organizations: Melissa Etheridge; Supervisor Sheila Kuehl; Jinx Beers; Jewel Thais-Williams; Rita Gonzales; Ivy Bottini; Jeanette Bronson; Jeanne Cordova; June Mazer Lesbian Archives; Patrisse Cullors; and Marna Deitch.

Since incorporation in 1984, the City of West Hollywood has become one of the most influential cities in the nation for its outspoken advocacy on LGBTQ issues. No other city of its size has had a greater impact on the national public policy discourse on fairness and inclusiveness for LGBTQ people. More than 40 percent of residents in West Hollywood identify as LGBTQ and three of the five members of the West Hollywood City Council are openly gay or lesbian. The City has advocated for more than three decades for measures to support LGBTQ individuals and has been in the vanguard on efforts to gain and protect equality for all people on a state, national, and international level.

For additional information about the Rainbow Key Awards and Etheridge Award, please contact Hernán Molina at (323) 848-6364 or at hmolina@weho.org or visit www.weho.org/rainbowkey.

Well deserved Paulo! I couldn’t be happier to know you are being recognized for your work in LGBT journalism, drug prevention and outreach efforts! I can’t wait to watch!