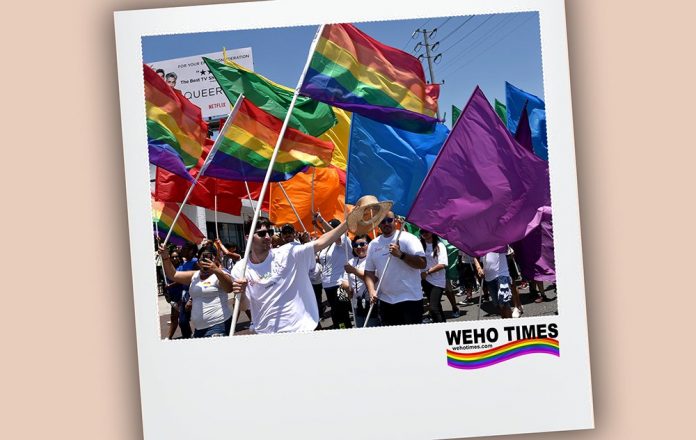 The West Hollywood City Council will consider a proposal from JJLA, Inc. (JJLA) to produce a pride parade in West Hollywood at the upcoming regular City Council meeting, on Tuesday, February 22, 2022. The parade would take place on Sunday, June 5, 2022, as a part of the inaugural WeHo Pride event.

Recommendations up for discussion at the council meeting are as follows:
1) Receive a proposal from JJLA to produce a parade in West Hollywood on Sunday, June 5, 2022, as a part of the inaugural WeHo Pride event.

2) Authorize the City Manager to negotiate an agreement and execute any related documents with JJLA to produce a parade on Sunday, June 5, 2022.

3) Authorize the City Manager to negotiate a sponsorship agreement and execute any related documents with JJLA to seek sponsorships to offset the costs of the WeHo Pride festival and/or parade.

4) Authorize the Director of Finance & Technology Services to receive sponsorship funds and make related budget adjustments for the receipt of any sponsorship funds related to the WeHo Pride festival and/or parade.

5) Authorize the Director of Finance & Technology Services to allocate $800,000 from unallocated General Fund Reserves for the cost of producing a parade on Sunday, June 5, 2022.

7) Approve a street closure of Santa Monica Boulevard between Fairfax Avenue and Doheny Drive from approximately 5:00AM through 6:00PM on Sunday, June 5, 2022, as well as any additional street closures consistent with the needs of the parade.

At its meeting on December 20, 2021, the City Council directed staff to negotiate agreements with JJLA to both produce its proprietary LGBTQ+ concert, “OUTLOUD,” in West Hollywood Park as well as to coordinate production elements related to affinity group participation in WeHo Pride.

Following the City Council meeting on February 7, 2022, JJLA submitted an application to produce a parade in West Hollywood on Sunday, June 5, 2022.

As proposed, the pride parade would serve as an anchor event for the City’s inaugural WeHo Pride.
If approved, JJLA would function as a permittee and the producer of the parade, responsible for creative direction and programming, including selecting participants and procuring sponsorships, in addition to the logistical execution of the event; the City would serve as the permitting entity, hosting the parade within its limits, similar to the role that the City played for past Pride parades.

At its meeting on February 7, 2022, the City Council approved expenditures in an amount not to exceed $1,000,000 related to WeHo Pride. Costs associated with JJLA’s proposed parade are not included in that amount. Additional funding in an amount not to exceed $800,000 would need to be allocated for a for a parade on June 5, 2022; however, some of those costs may be offset by sponsorships. This item provides direction for the City Manager to negotiate a sponsorship agreement with JJLA.

June 5 is the same day as Venice Gay Pride, June 3 – June 5. Does the West Hollywood City Council ever do research ?

I mean, have they ever?