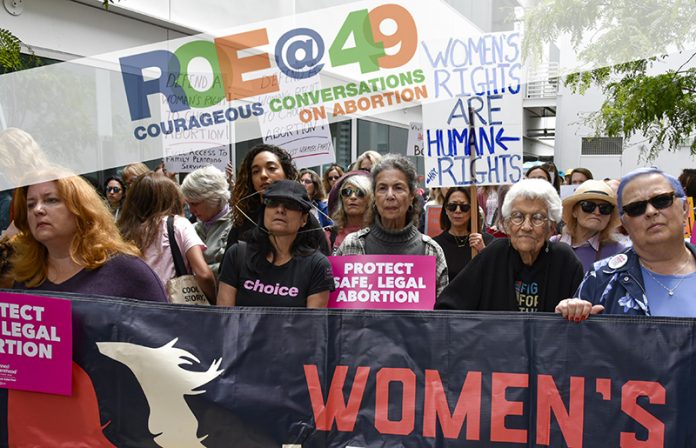 The City of West Hollywood and its Women’s Advisory Board will join with the National Council of Jewish Women, Los Angeles (NCJW|LA) for ROE@49: Courageous Conversations on Abortion, a virtual event to commemorate the anniversary of Roe v. Wade, the landmark U.S. Supreme Court decision that legalized abortion in the United States. The event will highlight ways to rise against the growing policy-based assault on abortion access, to reaffirm support for the right to choose, and to advocate for reproductive justice and accessibility to healthcare.

ROE@49: Courageous Conversations on Abortion will take place as a virtual event on Sunday, January 23, 2022 at 5 p.m. It will be a night of open, honest, and meaningful conversations with community, and it will feature a special focus on self-managed abortion medication: a potential path to uplift rather than restrict reproductive freedom. Tickets are $15 and proceeds will benefitWomen’s Reproductive Rights Assistance Project (WRRAP), a non-partisan, nonprofit organization helping women gain access to safe, legal abortion services and emergency contraceptives. To participate in ROE@49: Courageous Conversations on Abortion, please visitwww.ncjwla.org/events/roe2022 or www.ncjwla.org by January 20 to register.

The event will be hosted by Vanessa LeMaistre, Program Coordinator, Sisters in Control: Reproductive Justice and Get Smart B4 You Get Sexy, Black Women for Wellness, and will feature a virtual keynote address by Fabiola Carrión, Director, Reproductive and Sexual Health, National Health Law Program (NHeLP). The keynote will be followed by virtual breakout sessions for small group conversations. This year’s event will offer attendees a unique opportunity to lead guided conversations about abortion in the comfort of their homes (or anywhere online) with friends, family, and the larger community.

ROE@49: Courageous Conversations on Abortion is supported by the City of West Hollywood and its Women’s Advisory Board; ACCESS REPRODUCTIVE JUSTICE; Black Women for Wellness; California Latinas for Reproductive Justice; Planned Parenthood Los Angeles; and Women’s Reproductive Rights Assistance Project (WRRAP). These five healthcare and advocacy organizations are all a part of the California Future of Abortion Council (CA FAB Council), comprised of more than 40 organizations across California that released a new report in December 2021 highlighting key policy recommendations state leaders and lawmakers can take to increase access to safe, equitable, and affordable abortion care.