“I’m outraged at the near-total abortion ban that has gone into effect in Texas, despite legal efforts to block it,” reads a statement by West Hollywood Mayor Lindsey Horvath. “The enactment of Senate Bill (SB) 8 is shameful. The law bans abortions after approximately six weeks of pregnancy, making it one of the most dangerous anti-abortion laws in recent history. Six weeks of pregnancy is well before many women even know they are pregnant. Clinics in Texas will immediately be forced to turn away people seeking a procedure and the law makes no exceptions for cases involving rape or incest.” 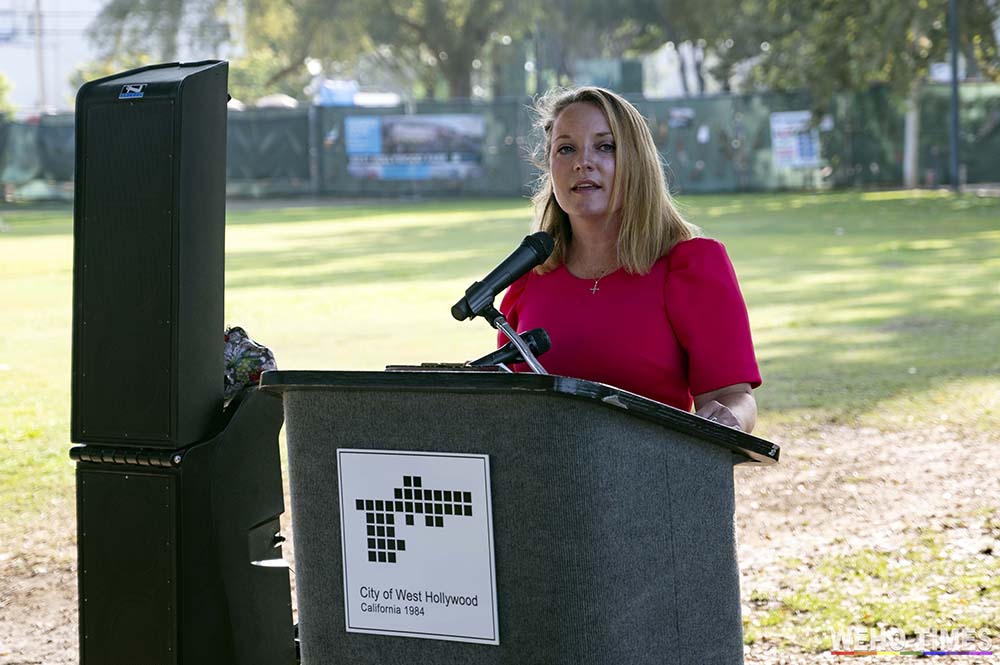 “Especially disturbing is that the new Texas law empowers any private citizen to sue an abortion provider who violates it Women seeking abortion and people who assist them will, quite literally, be hunted for bounty in Texas simply for seeking access to reproductive health services. Their support networks, including family members, friends, and medical professionals, will also be under attack, with $10,000 rewards being offered for turning in anyone involved in seeking access to abortion. Private citizens who bring such lawsuits will not need to show a connection to those they are suing.” 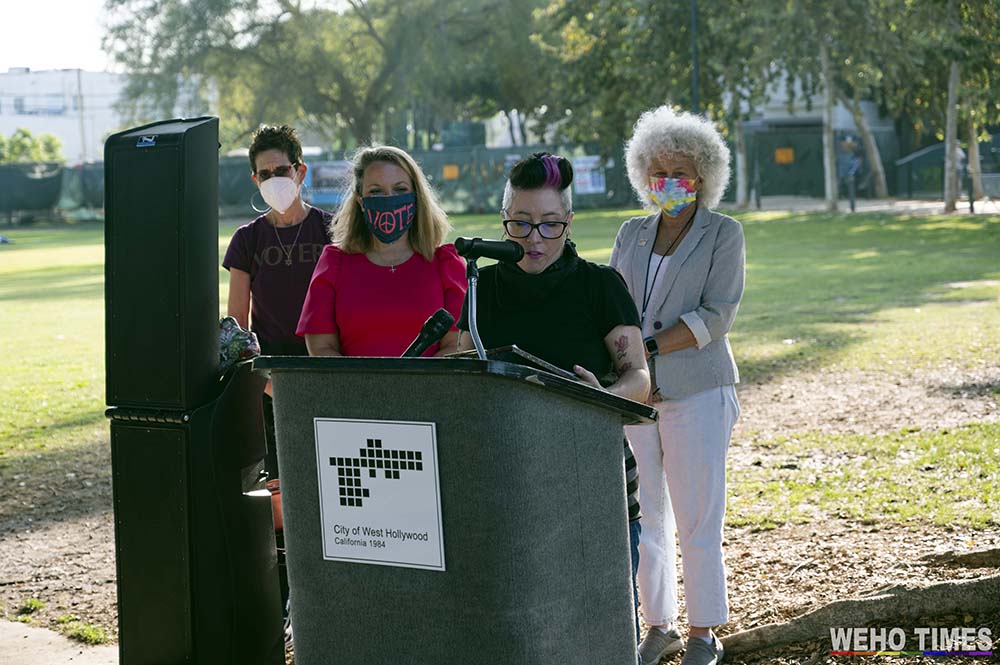 Mayor Horvath’s outrage was echoed numerous times at a reproductive rights rally to defend a woman’s right to choose and to protest the new Texas abortion law that prohibits abortions once a medical professional can detect cardiac activity. West Hollywood elected and appointed officials joined community leader and community members from advocacy groups like, Black Women Lead, Women’s March LA, UNITE HERE Local 11 and Planned Parenthood Los Angeles at West Hollywood Park at rough 5 p.m. to a crowd of about 50 people, a lot of them reporters from several news outlets.

“The hypocrisy of these Handmaid’s Tale politicians is astounding,” said West Hollywood Mayor Pro-Tempore Lauren Meister at the rally. “They don’t support affordable healthcare, or birth control, or sex education in our schools. They don’t legislate provisions to care for a child whose parents are unable to take care of them. They establish extreme punishments for women who abort and the doctors who provide care for them, but not the boys or men who impregnate them. They legislate to restrict women’s ability to get an abortion, yet won’t legislate common sense gun laws or mask laws which would protect children, whose lives they say they care so much about.” 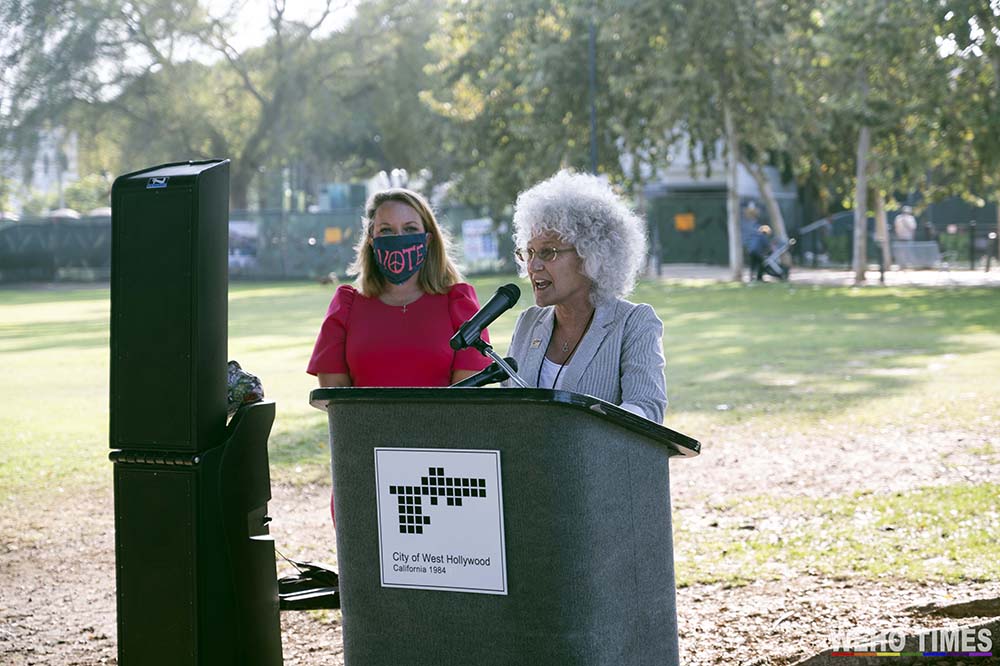 “I haven’t watched the Handmaid’s Tale because it is traumatic for me to watch it,” said council member Sepi Shyne. “What’s more traumatic is what’s happening in Texas, not only with this ban on abortion in six weeks, when women don’t even know they are pregnant. What’s happening is bad for women. What’s happening is bad for LGBTQ people. Don’t think for a second that we’re not next. We all need to continue to fight. We need to vote right now. We have an election in this state that is meant to turn our state more conservative and it is a direct threat to women, LGBTQ people, POC individuals, immigrants and all marginalized people.” 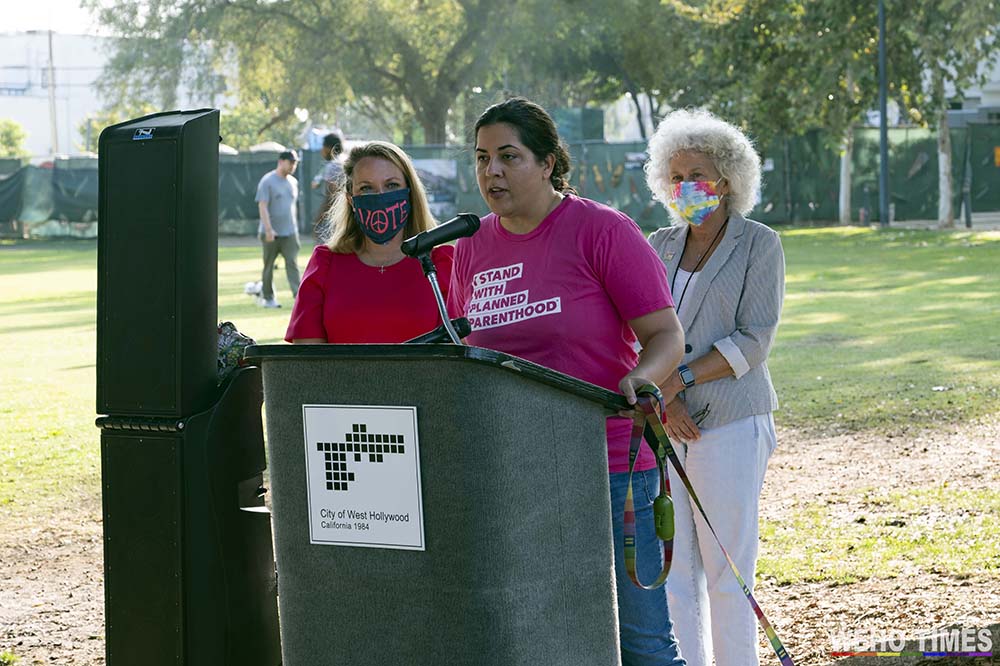 “These are unprecedented times,” said former council member Abbe Land, “These are times when we should be moving forward. We should be moving to the next level of inclusiveness, getting healthcare for all, and instead, we are moving backwards. The State of Texas is truly one example. Voting rights are at risk all across the nation. Why? Because they don’t want us to vote. They don’t want people who believe in the right things to vote. Not being able to get the kind of health care you need, for women not to be able to get an abortion when they determine that is the best thing for them and their families, that is heinous, heinous to not give us that right… we are looking at people who say they are pro life. They are not pro life. That is a fallacy. That is a vicious, vicious lie. They do not care about the babies that are born. they do not care about life. They only want to make sure that they hold women back.” 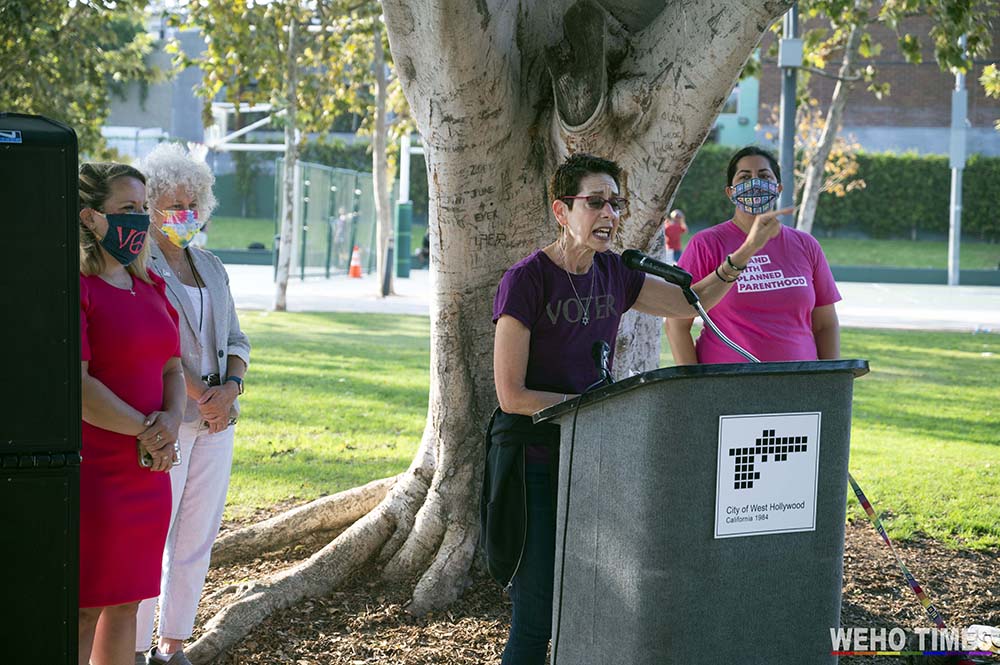 “My body, my choice. Her body, her choice,” chanted Shannon Morton, a member of West Hollywood’s Social Justice Task Force and a founder of Black Women Lead. “What is so radical about SB8 is that it’s taking us back to a time before Roe v Wade when women did not have a choice over their own bodies and over their own destinies, Here we are 50 years later having to fight this fight all over again… this law is a racial and economic catastrophe. Decades of racism, structural inequality within the healthcare system have left black and Latinx people trying to make ends meet with few alternatives. The results for many of the vulnerable will be having to carry out their pregnancies against their will. People passing these laws are saying abortion is a privilege for few and not a right for everyone. It is a privilege of women of means because they can go to another state. The men writing these laws will make damn sure their daughters get an abortion so they can go off to college, but brown and black girls and women, this is a full on assault on them.” 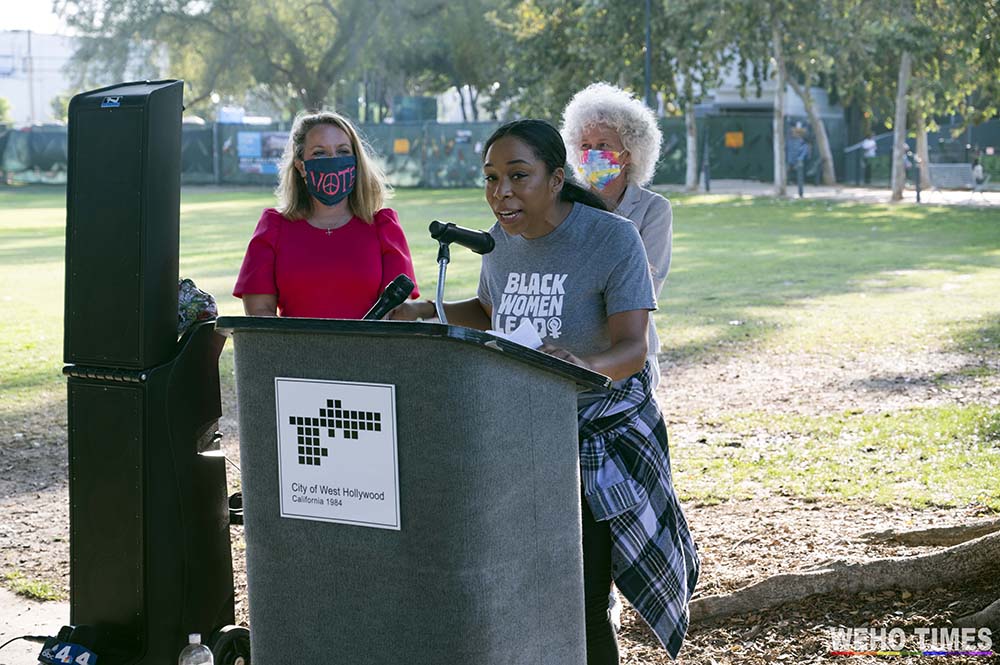 “Roe vs Wade is no longer the standard… We’ve been steadily chipping at Roe vs Wade for a very long time,” said Sue Dunlap, President and CEO of Planned Parenthood Los Angeles. “We’ve been having women come to Los Angeles from Texas from from across the United States to Planned Parent Hood Los Angeles for abortions. This is not new, this idea that women travel. This is not know that this impacts are women of color and Asian women and women of lower income. What’s new is that we’ve been saying the sky is falling for a long time, but the sky has fallen for women in Texas right now. There is no access to abortions.” 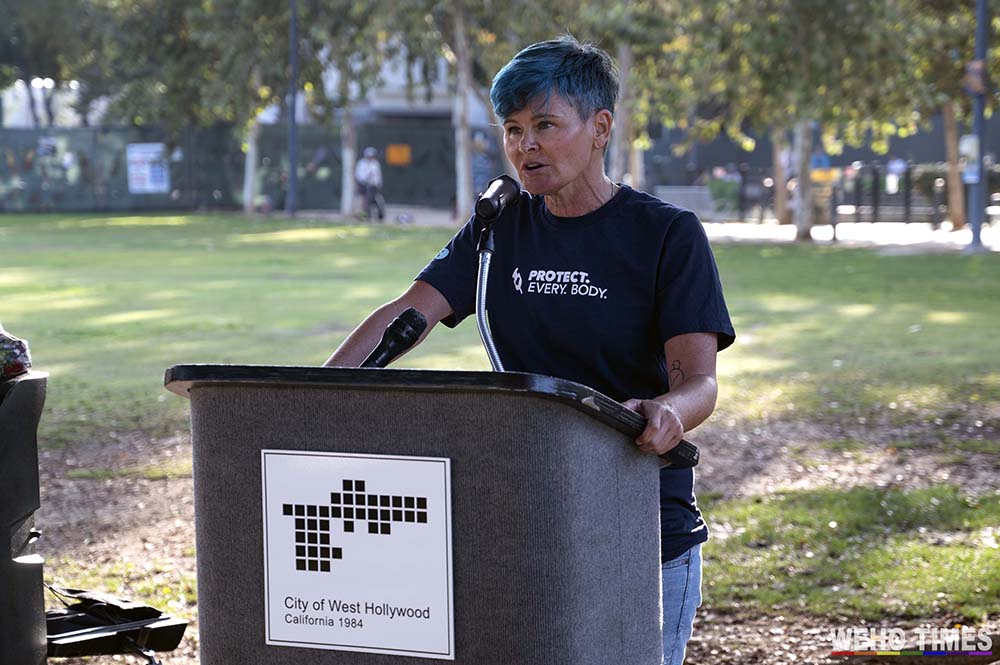 “What do we do when the law itself has become an instrument of abuse?” Civil rights attorney Lisa Bloom asked from the podium. “That really a new one on me when we’re talking about the rights of women, but that’s what’s happened beginning today in the state of Texas. I have news for the state of Texas. Roe v Wade is still the law of the land. I have news for the state of Texas. Women still have equal rights under the law of land of the Constitution. Roe v Wade which has been the law since 1973 and is still the law today, says that women have a fundamental Constitutional right to have an abortion.”

The Supreme Court voted 5-4 to deny an emergency appeal that would block SB8 just before midnight on Wednesday.

President Joe Biden released a statement condemning the decision calling it an “unprecedented assault on a woman’s constitutional rights under Roe v. Wade, which has been the law of the land for almost fifty years.”

Photos by Paulo Murillo for WEHO TIMES. To view more photos, visit our Facebook page at: 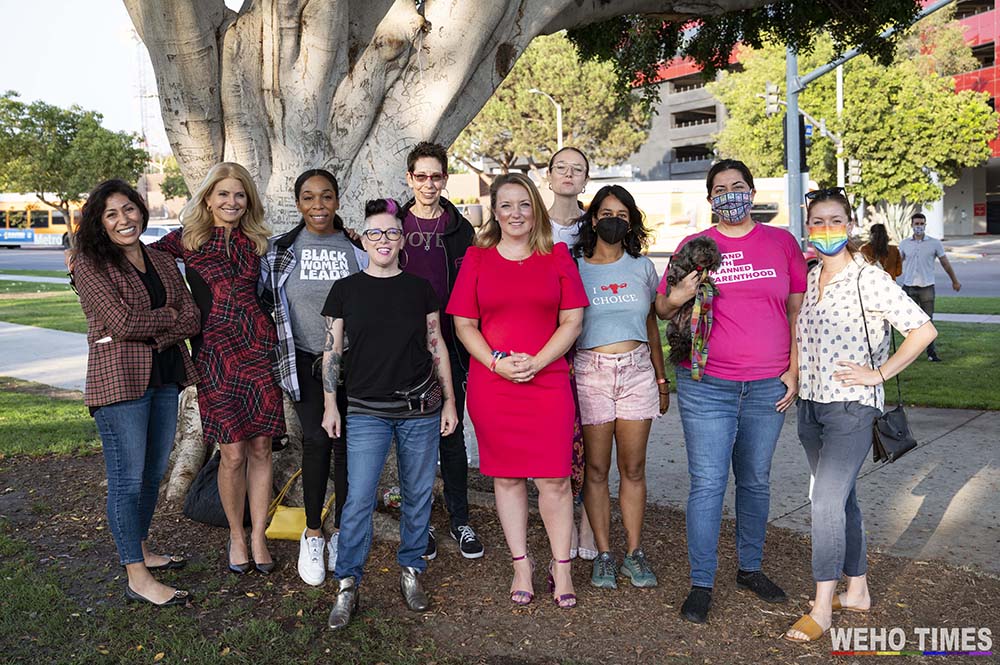