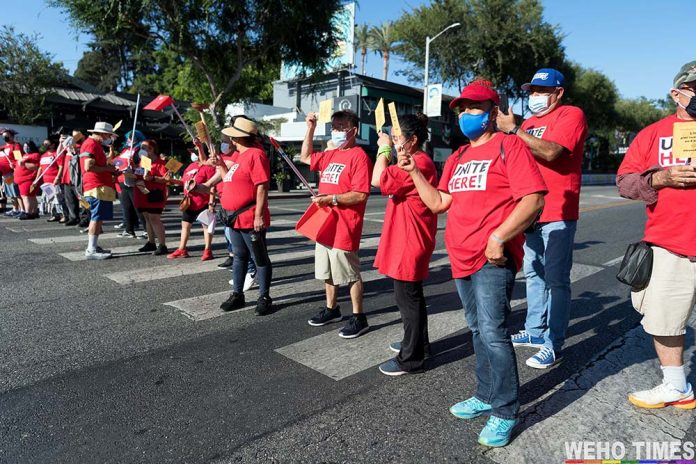 On a 4-1 vote Monday night, West Hollywood’s City Council approved controversial changes protecting hotel workers and placing limits on the number of rooms housekeepers are required to clean per day, while providing additional compensation for going beyond those limits.

The Council set a limit of 3,500 square feet a housekeeper is required to clean each day for hotels with 40 or more rooms, and 4,000 square feet in hotels with 39 or fewer rooms. This was the most controversial part of the ordinance, the part which area hotels and the West Hollywood Chamber of Commerce fought against, maintaining it is bad for business since it will add to the hotel’s expenses.

City staff reported the average hotel room in West Hollywood is about 500 square feet. With this new ordinance, housekeepers will have a quota of about seven rooms per day. This will drastically reduce the workload for some housekeepers who reported during public comment that they are often required to clean 12 or 15 rooms per day and frequently work during their lunch break to meet their daily quota. Workers also reported they often avoid drinking water during a shift so they will not have to take a bathroom break.

With this new ordinance, when a housekeeper is required to go beyond this square footage, they will then be paid double for the entire shift (not just the hours beyond eight as is typical of most overtime situations).

Councilmember Sepi Shyne, who sponsored the ordinance, insisted the ordinance was a matter of social justice since it will help workers who are predominantly people of color, immigrants and women.

“This ordinance is simply asking fair compensation for housekeepers who carry the heavy lift for hotels,” said Shyne. “Creating equity always costs one side which has been predominantly in an economic and power position more. That is how the playing field is leveled.”

Councilmember John Erickson had similar comments, saying it was the right thing to do. Erickson doubted he could clean five rooms during an eight-hour shift, much less the 12 or 15 some housekeepers must clean, all while being paid just slightly above minimum wage.

Shyne had harsh words for the city’s Chamber of Commerce for creating a fear campaign against the ordinance. The Chamber sent mailers and took out ads which said the ordinance would create a “tourist cap” and reduce the city’s social services budget which is funded in part through hotel occupancy tax.

“The Chamber has chosen to disregard any relationship and instead chosen to attack some of us and install mass fear on our residents based on misinformation,” said Shyne. “This type of behavior is not only outrageous but very ineffective and not helpful for our community or business community.”

Councilmember Lauren Meister voted against the ordinance. During her comments, she indicated rather than basing the workload on square footage, she preferred using a credit system for rooms cleaned. Most hotels currently use some type of credit system which assigns different credit points to each type room with fewer credits given to smaller rooms and more credits given to suites and larger rooms.

Meister also decried the divisive tactics both sides used to stir up emotions among residents, calling it “sad,” a sentiment Erickson echoed. Meister also called out UNITE HERE for portraying the city’s hotels as “evil.”

Other provisions of the ordinance include:

After the meeting, UNITE HERE released a statement applauding the Council’s vote.

“For years my coworkers and I were the invisible workforce that built the tourism industry in West Hollywood. Tonight, the West Hollywood City Council saw our humanity and stood with us. On behalf of our city’s hotel workers I want to say thank you for ensuring these protections and passing this policy,” said Norma Hernandez, who worked as a housekeeper at the Mondrian for 12 years and was a fierce advocate for the law.

Very well breakdown of what happened at this meeting. There was no discussion. All I heard was a bunch of speeches from council members who owe their election to the unions. Meister is the only one asking the right questions. Too bad she’s out numbered.

Vilifying the hotel industry is not a very smart move. Good luck planning your next City event on the Sunset Strip.