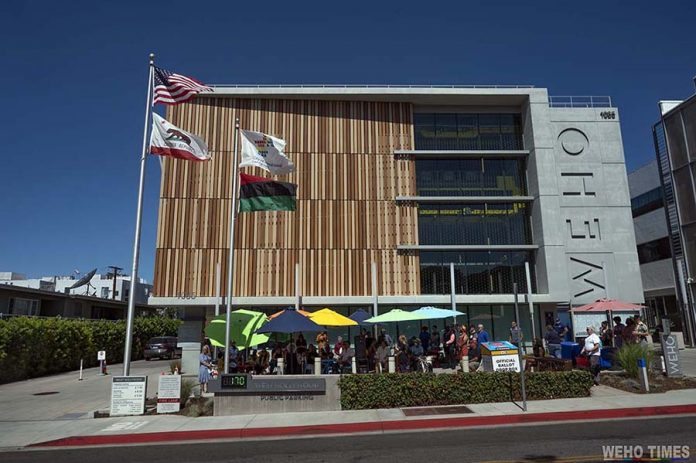 The City of West Hollywood hosted a Pan-African Flag-Raising ceremony in celebration of the Juneteenth 2022 holiday on Sunday, June 19, 2022 at 10 a.m. The event took place in the auto court behind West Hollywood City Hall, located at 8300 Santa Monica Boulevard.

Speakers of note included Phil Wilson, the president and CEO of Black AIDS Institute, the only HIV/AIDS think tank focused exclusively on the Black/African American community. “One of the important things of Junteenth, particularly at this point and time, is how important knowledge is,” he said. “I’d like to pause and think for a minute about people having been slaves for two-and-half years after they’re actually freed. The truth of the matter is the last slaves weren’t freed on Juneteenth. They just found out they were freed on Juneteenth…one of the things that this community knows better than any is that we don’t know can kill us.”

Wilson pointed out that Juneteenth was second holiday for Black people since Martin Luther Kind Day was established. He also spoke of the progress we have made as LGBT people, recognizing the various pride events celebrated in Southern California. He also said he pays tribute to those lost to AIDS by not denying his age and not coloring his hair.

“Conversations around race are still visceral, still painful, and throughout the years, African Americans–all marginalized people in fact–have been told that we are responsible for our own oppression” she said. “But there is always an original sin, and for this country, the original sin was the institution of slavery–an original sin that we have yet to find redemption from. Juneteenth is a day of reflection and celebration and it seemingly underscores the promise of our nation that all men are created equal, but that’s not honest. Slavery as a practice existed in many cultures, but the enslavement of African people prompted the social construct of race. The concept of white was created to distinguish oneself as separate and superior to enslaved Africans and this distinction is in fact the advent of white supremacy… Juneteenth marked the end of enslavement, but it is not really Freedom Day, because many in our community are still waiting for freedom.”

“My parents always told us, ‘your black skin is beautiful,” said Mallery J Robinson of the Transgender Advisory Board. “Never let anyone make you feel less-than, inferior, unworthy because of your skin color. Never let that be the determinate of your education, of your housing status, or any other determinate of your life. I am a firm believer, if you stand for nothing you will fall for anything.”

Juneteenth – also called Emancipation Day, Jubilee Day, Freedom Day, and Black Independence Day – is recognized on June 19 each year marking the date when some of the last enslaved people in the Confederacy were notified of their freedom on June 19, 1865. Juneteenth is recognized annually to commemorate the ending of slavery in the United States and represents a special day of reflection.

The Pan-African flag was designed to represent people of the African diaspora and consists of three equal horizontal bands of red, black, and green. The three colors of the flag symbolize: red for the blood that unites all people of Black African ancestry and has been shed for liberation; black for the people whose existence as a nation, though not a nation-state, is affirmed by the existence of the flag; and green for the abundant natural wealth of Africa.

Very good. but…that’s more than they did for Veteran’s Day. Step it up West Hollywood.

Seriously?
There’s a permanent Veterans park in City of West Hollywood, Juneteenth got a flag raised for a day.

It would be nice if our public leader’s took 10 minutes out of their day so that they and the community could show their respects, honor the past and have a formal thank you for those that lost their lives so that we may remain free. It’s not a one and done. Nothing was done on VD. Which I think is sad. It looks as if every single council member showed up for this ceremony.

ABOUT US
WeHo Times West Hollywood Daily News, Nightlife and Events. The WeHo Times is an online news source covering the life and times of the City of West Hollywood. Featuring unbiased professional reporting and photo journalism, WEHO TIMES is updated daily, delivering the latest city news. The online publication founded in 2017, also features cultural events, people, politics, places, nightlife, and the history that make the City of West Hollywood the unique, creative city we all know and love.
Contact us: editor@wehotimes.com
FOLLOW US
© 2022 Murillo Media, LLC
wpDiscuz
3
0
Would love your thoughts, please comment.x
()
x
| Reply