“What makes your dick hard?” That was one of the questions that panelist Tom Pardoe, explored at West Hollywood’s Chemsex Town Hall panel this past Wednesday, February 12.

The town hall discussion centered around sex and drugs and why too many in the LGBT community, mainly gay men, turn to dangerous illegal substances like meth, GHB, ecstasy and cocaine to reduce inhibitions that allows them to engage in sexual activity that turns them on and is often times stigmatized and deemed shameful.

The Chemsex Town Hall, moderated by West Hollywood council member John Duran and Alexis Sanches, Assistant Program Manager with the Institute for Public Strategies (IPS), attracted a decently large crowd of community members. The panelists were diverse in the politically correct sense, with a mixture of gay, lesbian, trans, and there was even a panelists who identifies as a sober drag queen.

Panelists included Lello Tesema, MD, MPH of LA County Department of Public Health who provided her medical insight on addiction and sobriety; Tom Pardoe, Eagle LA Mr. Leather 2010, who has 25 years of sobriety; Melissa McCracken, who runs Breathe Life Healing Centers in West Hollywood; Jason De Puy, who was representing the WeHo nightlife in full drag and Jimmy Palmieri, the founder of the Tweaker’s Project, who stepped in at the last minute for Miranda Adriana Ramirez, of Friends Community Center.

The panelists dove into deep discussions about the dangerous combination of sex and chemicals and the different ways it is ravaging certain parts of the gay community. The activity is known as chemsex.

The phrase chemsex was coined in the UK, where pharmacists are called chemists. Chemsex made headlines in the U.S. in 2016, when Henry Hendron, a 35-year old top London lawyer, was arrested after admitting that he supplied his 18-year-old Colombian boyfriend, Miguel Jimenez, with a chemsex cocktail that triggered an overdose, which ended the young man’s life. Hendron received a mild sentence of 140 hours of community service for his part in Jimenez’s death. Critics attributed the light sentencing to white privilege.

Chemsex falls in line with PNP (party and play), code for drug-induced sex. It is initiated at places like circuit parties, gay cruises, bathhouses, and through sex hook-up apps like Scruff and Grindr. The need for sleep or food is repressed during chemsex and sexual focus is heightened enabling longer, more extreme sex, often times with multiple partners.

Chemsex can be dangerous and involves serious risks for an individual’s sexual health. Less fear of STIs, exposes users to STDs, including HIV. Chemsex can also lead to fatal drug-overdoses, especially if party drugs are laced with a dangerous dosage of fentanyl.

Dr. Tesema quoted a recent study, yet to be published, which found that one in four fentanyl-related deaths actually involved meth. “Meth was involved in more fentanyl-related deaths than any other substance,” she said. “There is a lot of contamination of fentanyl in meth. Often times people don’t know about it, unless they’re using fentanyl test strips, so we advocate for anyone who is a primary meth user to carry Naloxone and fentanyl test strips and practice harm reduction strategies…go small and slow. If you’re using, use with somebody else, because it really is quite common. I think it will become more common, because fentanyl supplies are going up. It’s cheap to make. It’s pervasive. I can’t emphasize enough that it is a big problem, primarily for meth users, it’s a bigger problem than any other drug.

Melissa McCracken said meth is unlike any addiction she has seen in her field and that it is important to focus on long term recovery. “People who come off of meth still feel disconnected,” she said. “They still feel lonely… I really want to stress to people that if you hold on, it will get better. There are certain things that happen, the inability to feel good, the dopamine receptors, are damaged in the brain. It takes a while to heal. Meth addiction takes a longer healing time. If you have a broken arm and the cast is taken off, you’re arm is still going to need to heal, so you have to make sure that you stay committed and that you have a strong support group.”

Dr Tesema pointed out that a relapse is common and it is a part of the process of recovery. “Relapse is a given as part of the recovery journey,” she said. “I think people don’t hear that. They see relapse as failure and that intensifies stigma and shame around addiction and many people end up using more.”

Pardoe stressed on the importance of having an open dialogue about intimacy and removing stigma from sex fetishes. “I started to experience things with people that had information about how to have consensual sex and things that I thought was filled with shame,” he said. “I got to get over the shame. I got to an exchange of power experience in a really healthy way. It wasn’t until I got to know myself that I learned about intimacy. That is what I’d like to share with new sober people. There is all this information about sexual consent and having a power exchange and what is negotiation. This is what makes my dick hard. And they get to tell you. There is flogging, fisting, pissing, whatever it is.”

Duran brought up the issue of loneliness in a digital world where a person can have over 100,000 followers on instagram and post about feeling alone.

“Our former Surgeon General, Vivek Murthy, said that our nation is facing a crisis of loneliness and that we’re in an epidemic of loneliness and this has serious implications in terms of individual health and public health,” said Dr Tesema. “[social media] is a double-edged sword. In some ways it can create connection but in many ways it also erodes connection.” 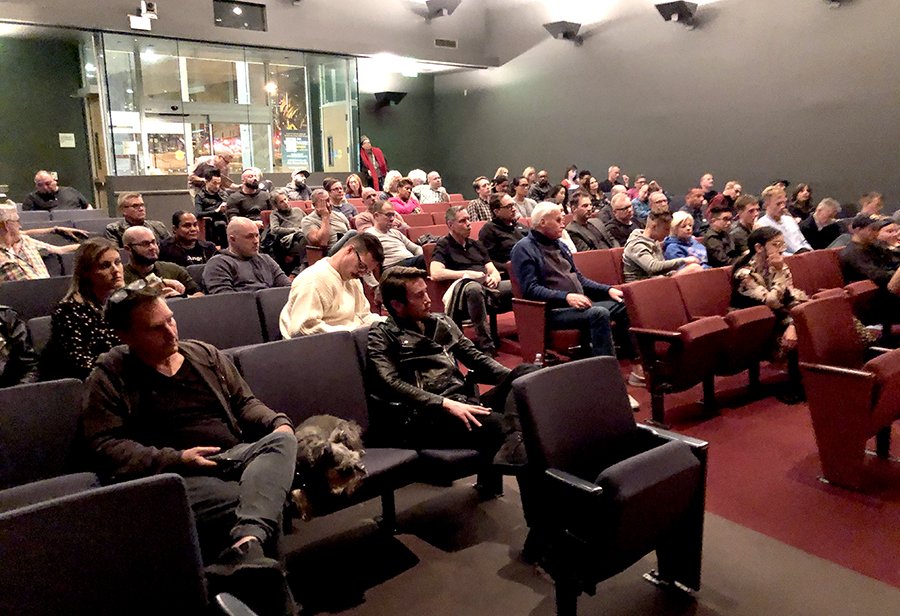 The Chemsex Town Hall was open to written questions from the audience.

One attendee asked about the need of a campaign against meth and how he could get people to rally on the issue.

Palmieri spoke about promoting positive messaging with the campaign he launched for the Tweakers Project called Sober Sizzles. “I used members in the community that people knew, maybe from a newspaper column, maybe from a cable show, or whatever they were doing, and they modeled their sobriety. They were sexier pictures, but they were pictures of folks that were visible in the community. All of a sudden people started think that if they can do it, I can do it.”

Another question that came up is how do we encourage sex workers to report crimes and how do they navigate through the power dynamics where they feel pressured to do drugs.

“Sex work is real work,” De Puy informed the audience. “There is a lot of shame around that. A lot of boys in our community, trans women, trans men, thrive and make a living out of that. I’ve lived with porn stars, masseuses and I see them as normal, average human beings. They just do that as their profession. They told me before that they run into clients who are using and want them to use. There is a power play. They say no, or they pretend to do it to psyche them out. I know that if they’re uncomfortable, they leave. I’m sure there are people who aren’t able to do that.”

An audience member asked a question about law enforcement.

Duran pointed out that law enforcement will arrest someone for driving under the influence of drugs, but thanks to a California vote, drug charges are now no longer felonies, they’re all misdemeanors. The goal is to push people out of criminal justice and into treatment instead.

“I thought the forum was successful overall.” Alexis Sanchez told WEHO TIMES. “All the panelists brought unique perspectives. I thought the audience asked really great questions and I’m happy it was really well attended. Overall we started a great conversation that hopefully continues about what meth use looks like, what the dangers are, how people can find help and achieve recovery. The Safe West Hollywood Coalition is going to continue to do outreach. We’re hoping to have more of these events and continue the conversation. We’re working towards building support for treatment and recovery options.” 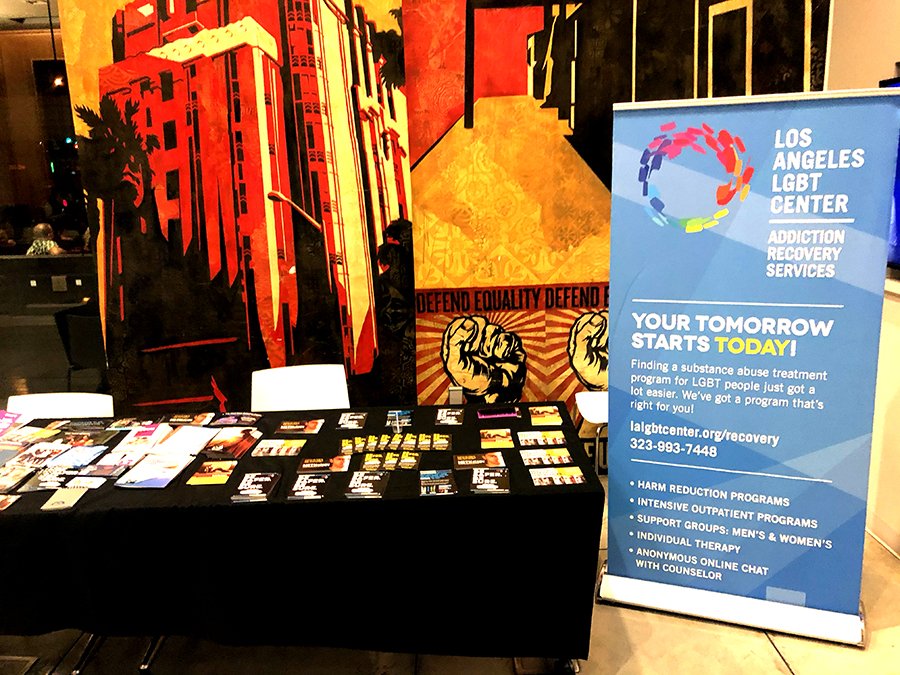 According to Duran’s assessment, this is the seventh anti-drug forum sponsored by the City of West Hollywood. The last drug panel forum hosted by the City was “Tina and Gina – Killing Us Softly”, a community discussion on meth, sex and GHB. That panel discussion dates back to May 7, 2014.