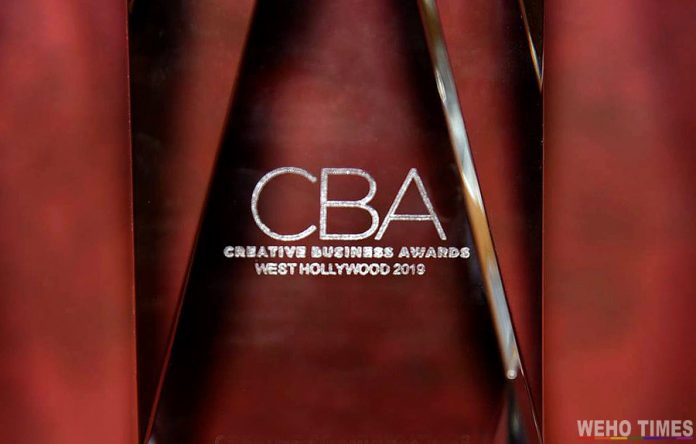 WHCC will host the awards ceremony on Wednesday, November 17, 2021 at the 1 Hotel West Hollywood, at 8490 Sunset Boulevard. The festivities will begin at 6:00PM with a reception and silent auction sponsored by Beverly Center and end with an after-party sponsored by Capitol Drugs.

Each year the Chamber celebrates businesses that have shown innovation and creativity in their business model. The nominees are selected by their peers, the winners are chosen by the WHCC Membership, and announced at the event. After its year-long, forced hiatus, WHCC will once again host their annual power networking event, at a limited capacity, for vaccinated-only guests.

The Creative Business Awards (CBA) is the most important fundraiser for WHCC, a 501c6 non-profit organization. Funds raised from this event help to contribute to programming and promotions for the business community. The twenty-one (21) nominees in seven (7) categories were chosen for their innovative approach to business and/or creative merits in product and service by the WHCC Membership and staff. The criterion for selection was that the business be a WHCC Member and have made significant contributions to the West Hollywood business community. Members vote for their favorite nominees via an online ballot and the winners are announced at the event.

This year’s Legacy Award will be presented to David Cooley. Cooley has worked in and been involved with the City of West Hollywood for three decades. In 1991 Cooley invested in a small, discreet space in West Hollywood that he renovated into a coffeehouse called The Abbey.  After thirty years and five expansions The Abbey is more than 14,000 square feet. In 2016, Cooley expanded by opening The Chapel at The Abbey, directly adjacent to the world-famous nightclub. Cooley is a significant leader in the community and his philanthropic contributions are exceptional, raising hundreds of thousands of dollars for various charities and organizations. Cooley is active in politics and regularly hosts events and fundraisers for pro-LGBTQ+ candidates for public office.

The 2021 CBA nominees by category are:

Creative Concept (a business that is an innovator of a cool new concept, product, or service): Farm Cup Coffee | Better Than Sex – A Dessert Restaurant | Mr. Yum

WeHo Attraction Award (awarded to a business that attracts people to the West Hollywood area, or caters to the visitor and tourism market): Bottega Louie | E.P. L.P. | La Boheme

Creative Community Service (awarded to a business or individual who has shown exemplary service to the community philanthropically, or as a volunteer, an ambassador, a non-profit or a representative of government): Matt Fitch, Impulse and Handle with Care | Catherine Gray and Catherine Curry-Williams, She Angels Foundation| Keith Kaplan and Mylena Christina, Sotheby’s International Realty

For more event information on the 2021 Creative Business Awards, sponsorship, and tickets, visit: www.wehochamber.com or contact Genevieve Morrill, at 323.650.2688 or gmorrill@wehochamber.com.