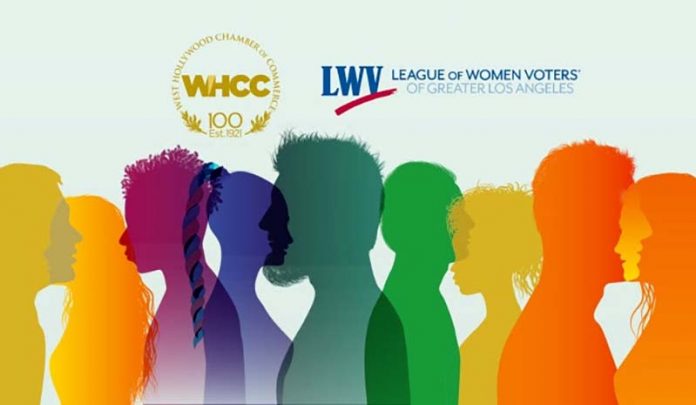 Three City Council seats will be decided in the upcoming General Municipal Election, which will be held on Tuesday, November 8, 2022. The West Hollywood Chamber of Commerce (WHCC) is sponsoring a candidate forum 2022 for West Hollywood City Council candidates, co-sponsored by The League of Women Voters of Greater Los Angeles (the League), and moderated by NBC4 Anchor and Reporter, Robert Kovacik. The forum will take place tomorrow, Tuesday, August 23 from 5:00 to 7:00 p.m. virtually on a webinar platform hosted by the League.

The Candidate Forums affiliated with independent and non-partisan groups such as the League of Women Voters of Greater Los Angeles, ensure that all City Council candidates are treated in a fair and impartial manner. It is important that the persons formulating or reviewing the questions as well as the moderator be independent and impartial. In the spirit of an impartial forum, and to collectively voice our concerns, the Chamber created a partnership with resident associations and neighborhood watch groups called WeHo for the People. West Hollywood neighborhood groups such as the West Hollywood West Residents Association, WeHo East, Norma Triangle, Ogden/Orange Grove Owls, West Hollywood North Neighborhood Association, Weho Plummer Park, N. Harper & Sweetzer neighborhood watch, and the WeHo Heights Neighborhood Association joined forces to formulate questions and/or topics for candidates important to the West Hollywood community ensuring the concerns of both residents and businesses throughout the city are addressed.

All twelve (12) City Council candidates have been invited to participate. Each candidate will be given a series of questions in the following categories of Public Safety and Homelessness, Economic Climate and Community Vitality, Development and Land Use, Governance and Ethics, and Transportation.  All questions will be rotated in random order for fairness, and candidates will have time for closing statements.  After the initial question/answer period, there is a public question period where attendees can ask specific questions in the webinar chat feature.

The Candidates Forum 2022 will not be televised on WeHoTV as it has in previous years–however, it will still take place via Zoom on Tuesday, August 23, from 5:00 pm to 7:00 pm.

City of West Hollywood Council members each serve for a term of four years and are elected at large. Each year, City Council members select one of their members to serve as Mayor for a year, with the term beginning after the City Council reorganization, which occurs once every year

The West Hollywood Chamber of Commerce is a 501c6 non-profit organization that supports and promotes a community environment where commerce can flourish. The Chamber fosters prosperity and champions local business by providing resources and leadership to advance activity through economic development, by advocating the position of the business community and by enhancing the quality of community life and promoting the uniqueness of West Hollywood.

ABOUT THE LEAGUE OF WOMEN VOTERS OF GREATER LOS ANGELES

The League of Women Voters, a non-partisan political organization, encourages informed and active participation in government, works to increase understanding of major public policy issues, and influences public policy through education and advocacy.