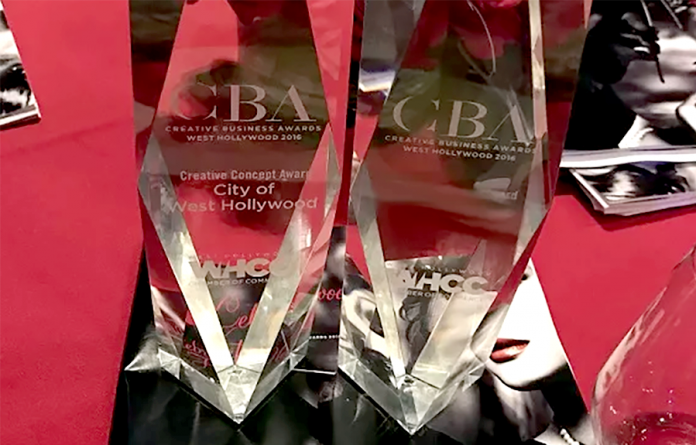 West Hollywood Chamber of Commerce (WHCC) recently announced the nominees for the 35th Annual West Hollywood Creative Business Awards 2018, presented by MedMen. The event is set for Thursday, November 15, 2018 at The Jeremy West Hollywood, at 8490 Sunset Boulevard. The festivities begin at 6pm with a reception and silent auction sponsored by Beverly Center that ends with an after-party sponsored by Capitol Drugs.

Each year the Chamber celebrates businesses that have shown innovation and creativity in their business model. The nominees are selected by their peers and the winners are voted by the WHCC Membership and announced at the event.

The Creative Business Awards (CBA) is the most important fundraiser for WHCC, a 501c6 non-profit organization. Funds raised from this event help to contribute to programming and promotions for the business community. The twenty-two (22) nominees in seven (7) categories were chosen for their innovative approach to business and/or creative merits in product and service by the WHCC Membership, its Board of Directors and the Special Events Committee. The criterion for selection was that the business be a WHCC Member and have made significant contributions to the West Hollywood business community. Members vote for their favorite nominees via an online ballot and the winners are announced at the event.

This year’s Legacy Award will be presented to Rod Gruendyke. Rod has been in the hospitality business for over 40 years; 27 of those as the General Manager, VP of Operations at the Sunset Marquis Hotel in West Hollywood. During his career, he has worked for the Four Seasons, Hyatt and Independent hotels. He serves on numerous boards for West Hollywood with over 25 years of service as Director on the West Hollywood Travel & Tourism Board, in all of its executive positions, as well as five years on the WHCC Chamber, Sunset Strip Business Improvement District Association Boards, and is a member of the West Hollywood Chamber’s Homeless Committee, and Leadership Council.

The 2018 CBA nominees by category are:

Creative Concept (awarded to a business that is an innovator of a cool new concept, product or service), RounderBum, Unplug Meditation, Shape House and Saved By The Max.

Corporate Innovation (awarded to a business that has shown creative innovation in their corporate business model), The Harmonist, MedMen, and Pink Dot.

WeHo Attraction Award (awarded to a business that attracts people to the West Hollywood area, or caters to the visitor and tourism market) Beverly Center, Carney’s Restaurant and Mystery Pier Books.

Creative Community Service (awarded to a business or individual who has shown exemplary service to the community philanthropically, or as a volunteer, an ambassador, a non-profit or a representative of government) Friends of The West Hollywood Library, Impulse Group and Andaz West Hollywood for their (ANDAZ)RED initiative in collaboration with the (RED) organization.