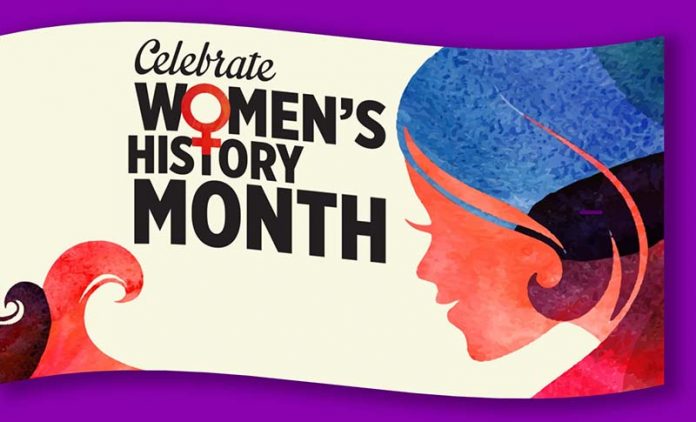 The City of West Hollywood is celebrating National Women’s History Month in the month of March with a series of events to recognize and honor women and women’s history.

National Women’s History Month officially kicked-off today with the unveiling of two new women’s history month street pole banners, one honoring feminist leader Zoe Nicholson and the other commemorating the 100th Anniversary of the 19th Amendment to the U.S. Constitution. The presentation was be held at the regular meeting of the West Hollywood City Council, at the City of West Hollywood’s Council Chambers/Public Meeting Room at the West Hollywood Library, located at 625 N. San Vicente Boulevard.

In celebration of the centennial of the ratification of the 19th Amendment guaranteeing women the right to vote, Women and Books club will host a discussion focusing on women’s suffrage in the context of the book, The Way of Beauty by Camille Di Maio. Women and Books is a book club that meets on the first Tuesday of each month to discuss books written by women authors. On Tuesday, March 3, 2020 from 7 p.m. to 8:30 p.m. at the West Hollywood Park Sky Room, located at 647 N. San Vicente Boulevard, the group will discuss . Women and Books is co‐sponsored by the City of West Hollywood through its Women’s Advisory Board and by the West Hollywood Library. Admission is free, but space is limited so RSVPs are encouraged. Free parking will be available at the adjacent five-story structure with validation at the event. For more information, please visit www.meetup.com/womenandbooksinweho.

In celebration of Women’s History Month and International Women’s Day, the City of West Hollywood will present two events on Saturday, March 7, 2020 at the West Hollywood Park Auditorium, located at 647 N. San Vicente Boulevard. The festivities will begin with an International Women’s Day Celebration hosted by the City of West Hollywood and its Russian Advisory Board from 12 p.m. to 3 p.m. featuring presentations, food, and live music by the Osh-Band with Shawn and Alik Oshmiansky, and dance performances by the Beverly Hills International Ballroom Dance Studio, including a flamenco show. Admission is free and no RSVP required. For additional information please contact (323) 848-6826.

Later this evening the City of West Hollywood and its Women’s Advisory Board, as well as the City of West Hollywood Women’s Leadership Conference & Network, featured the film LA Woman Rising, executive produced by actor Rosario Dawson. LA Woman Rising features 50 Los Angeles women revealing what motivates them to wake up each morning. Director Nana Ghana gracefully captures the morning rituals and untold stories of uncertainty, struggle and success. Considered a love letter to the real and diverse women of Los Angeles, LA Woman Rising is a distinct celebration of the female voice. Special guest speakers include the film’s director Nana Ghana.

Presented with the support of the City of West Hollywood, MashUp Contemporary Dance Company will present Each for Equal, an free afternoon featuring dance classes, a showcase, and a panel discussion with the talented female artistic directors of area dance companies including Bryn Cohn + Artists, Contra Tiempo, Entity, FABE, LA Contemporary Dance Company, Re:born, Szalt, and more. The event will take place on Sunday, March 8, 2020 beginning at 12 p.m. at the Sofitel Hotel, located at 8555 Beverly Boulevard in Los Angeles.

The City of West Hollywood and its Women’s Advisory Board will co-sponsor the 4th Annual Herstory Awards & Reception, which is presented by the Hollywood Chapter of the National Organization for Women (Hollywood NOW). The event will take place on Tuesday, March 17, 2020 at 6:30 p.m. at the West Hollywood Library Community Meeting Room, located at 625 N. San Vicente Boulevard. The event will feature toasts and roasts of this year’s honoree Nadia Sutton, founder and board member of PAWS/LA and City of West Hollywood Women’s Advisory Board member, for her work to better the community for people from all walks of life. Admission is free; RSVP is requested at https://herstoryawardsweho.eventbrite.com. Free parking will be available at the adjacent five-story structure with validation at the event.

The City of West Hollywood will sponsor the premiere performances of The TransVagina Diaries by Lindsey Deaton, which will take place on Saturday, March 14, 2020 and Sunday, March 15, 2020 at 2 p.m. at the City of West Hollywood’s Council Chambers/Public Meeting Room at the West Hollywood Library, located at 625 N. San Vicente Boulevard. Presented by the Hollywood Chapter of the National Organization for Women (Hollywood NOW) to celebrate the 2020 Transgender Day of Visibility, The TransVagina Diaries features a diverse cast of professional trans/gnc/intersex performing artists, giving voice to and showcasing their personal stories of physical, mental, and spiritual transition. Admission will be $15; for tickets, please visit http://hollywoodnow.org/ or call (323) 596-7389. Free parking will be available at the adjacent five-story structure with validation at the event.

The City of West Hollywood and Public Facilities Commission will celebrate Arbor Day as part of women’s history month this year by honoring Angee Beckett, Executive Director of the West Hollywood Tree Preservation Society with the “Urban Forest Preservation Champion” award. The Arbor Day event will take place on Saturday, March 21, 2020 from 9 a.m. to 11 a.m. at Plummer Park located at 7377 Santa Monica Boulevard, in the parkway along N. Vista Street and will include tree planting activities. There will be limited free onsite parking at Plummer Park. For more information, please call (323) 848-3116.

On Wednesday, March 25, 2020, from 6 p.m. to 8:30 p.m., the 25th Annual West Hollywood Women in Leadership Awards and Reception will take place at the London West Hollywood, located at 1020 N. San Vicente Boulevard. The event is co-sponsored by the City of West Hollywood and its Women’s Advisory Board and the West Hollywood Chamber of Commerce. This year’s honorees are Katie Brightside, artist/designer and Creative Director, Welcome to the Brightside Agency; Emiliana Guereca, Co-Executive Director, Women’s March Los Angeles Foundation; Silvia Salguero, mental health therapist and former City of West Hollywood Women’s Advisory Board member; and Fran Solomon, community leader and former City staff member. In celebration of the 25th anniversary of the West Hollywood Women in Leadership Awards there will be a special lifetime achievement award presented to Maria Shriver, acclaimed journalist, author, and Women’s Health Advocate. Admission will be $25; for tickets, please visit wila2020.eventbrite.com or call (323) 848-6823.

#WeHoStrong – Mayor John D’Amico is Out and About and Well...

The Gutting of the Historical Factory Building in WeHo is Well...

My 12 Step Store WeHo Continues to Celebrate Recovery During COVID-19...