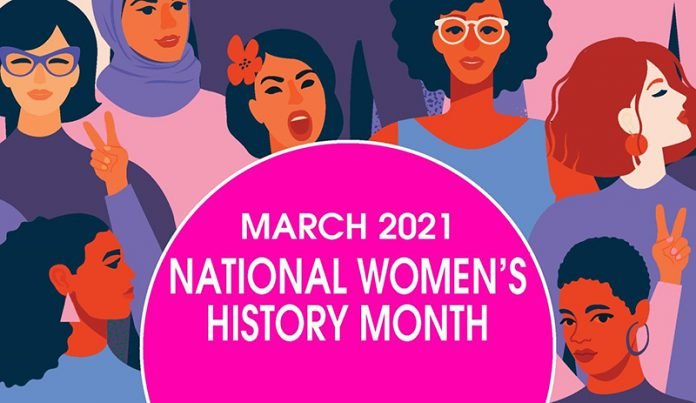 The City of West Hollywood will celebrate National Women’s History Month in March with a series of virtual events to recognize and honor women and women’s history. Additionally, throughout the month, a series of street lamp pole banners that commemorate famous American women, civil rights leaders, and women’s rights activists will be on display along Santa Monica Boulevard.

National Women’s History Month officially kicked-off with the unveiling of two new women’s history month street lamp pole banners: one honoring Alicia Garza, Principal at Black Futures Lab and Co-founder of the Black Lives Matter Global Network; and one honoring business leader and activist Michaela Mendelsohn, CEO/Founder and Board Chair of Trans Can Work. The presentation will be held at the regular teleconference meeting of the West Hollywood City Council on Monday, March 1, 2021 at 6 p.m. The City Council meeting broadcast will be available for viewing on the City’s website by visiting www.weho.org/wehotv.

The City’s display will also include a banner honoring pioneering lesbian and feminist activist Ivy Bottini, who died on February 25, 2021 at age 94. Bottini’s activism began when she joined a New York City gathering of luminaries of the women’s movement that included Betty Friedan, Muriel Fox, Ti-Grace Atkinson, and Flo Kennedy. In 1966, she cofounded the first chapter of the National Organization for Women and designed the organization’s logo, which is still in use today. In 1970, she led a group of women to the Statue of Liberty where they hung a banner that read, “Women of the World Unite,” and in 1978, she fought the Briggs Initiative, which sought to ban gays and lesbians from teaching in California public schools. She continued her activism through the AIDS epidemic and became chair of the campaign against the No on 64 Initiative, which would have amounted to firing and quarantining of people with HIV or AIDS. Bottini was, for many years, a West Hollywood resident and she served as a co-chair of the City’s Lesbian and Gay Advisory Board.

A series of virtual events throughout March 2021 will be held for National Women’s History Month including events, as follows:

Women and Books is a book club that meets on the first Tuesday of each month online to discuss books written by women authors. On Tuesday, March 2, 2021 from 7 p.m. to 8:30 p.m., the group will discuss The Last Flight by Julie Clark. Women and Books is co-sponsored by the City of West Hollywood through its Women’s Advisory Board and by the West Hollywood Library. Attendance is free. To RSVP and for more information, please visit www.meetup.com/womenandbooksinweho/events/275854767.

The City of West Hollywood and its Russian Advisory Board will present an online International Women’s Day Celebration on Sunday, March 7, 2021 from 1 p.m. to 2 p.m. Enjoy stories about inspiring women written by community members and read by professional actors. The program will also include short video interviews with women who have lived, worked, and risen to success in the City of West Hollywood. View online on the City’s YouTube Channel at www.youtube.com/wehotv. For additional information please call (323) 848-6826.

MashUp Contemporary Dance Company will present the 5th Annual International Women’s Day Dance Festival. Presented with the support of the City of West Hollywood, it will feature free dance classes, master classes, panels, and a choreographers’ showcase of live performance and dance films. The festival will take place from Friday, March 5, 2021 through Monday, March 8, 2021 at various times each day. Admission prices vary from free to $15. For more information and to register, please visit https://bit.ly/2MRxLpU.

In celebration of women authors, WeHo Reads: In Your Face – Womxn Writing Truth will be held virtually on Wednesday, March 17, 2021 from 6 p.m. to 7:30 p.m. The reading and discussion featuring Myriam Gurba and Randa Jarrar will celebrate the release of Randa’s new memoir Love is an Ex-Country. Musical guest will be Kelly Caballero. WeHo Reads is a literary series featuring new and noteworthy authors presented by the City of West Hollywood. Admission is free. To RSVP and for more information, please visit www.weho.org/wehoreads.

Join a dynamic group of lesbians and queer women discussing their written works on Thursday, March 18, 2021 from 7 p.m. to 9 p.m. Reviving the Revolution: Empowered Lesbians and Queer Women of Color Read and Discuss Their Written Works will be moderated by Suzette Zazueta and will feature Jewelle Gomez, C.B. Lee, Vero’nica Reyes, and Alicia Vogl Saenz. The virtual program is presented by City of West Hollywood, the June L. Mazer Lesbian Archives, and the Los Angeles LGBT Center’s Audre Lorde Health Program. To register please visit https://zoom.us/meeting/register/tJIoc-2hrzsvG9NwIHPrEGSb8Qr7lZwHSQFZ.

On Friday, March 19, 2021 from 6 p.m. to 7 p.m. there will be a Ruth Bader Ginsburg Day Celebration hosted by the City of West Hollywood and its Women’s Advisory Board, as well as the City of West Hollywood Women’s Leadership Conference & Network. The virtual event will feature a panel discussion about the legacy of United States Supreme Court Justice Ruth Bader Ginsburg. Admission is free. To RSVP and for more information, please visit www.wehorbgday.eventbrite.com.

The City of West Hollywood and its Women’s Advisory Board will co-sponsor an Equal Rights Amendment panel discussion, presented by the Hollywood Chapter of the National Organization for Women (Hollywood NOW). The event will take place virtually at on Saturday, March 20, 2021 at 12 p.m. Admission is free. For more information contact hollywoodnowchapter@gmail.com or call (323) 596-7389.

The City of West Hollywood and its Transgender Advisory Board and Women’s Advisory Board will host two virtual screenings of The TransVagina Diaries by Lindsey Deaton, which will take place on Saturday, March 27, 2021 at 2 p.m. and on Sunday, March 28, 2021 at 2 p.m. The TransVagina Diaries is an original contemporary work that premiered in 2020 and features a diverse cast of professional trans/gender non-conforming/intersex performing artists giving voice to and showcasing their personal stories of physical, mental, and spiritual transition. After each screening there will be a Q&A with cast members. Admission is free; for tickets and more information, please visit transvaginadiaries2021.eventbrite.com.

On Wednesday, March 25, 2021, from 6 p.m. to 7:30 p.m., the 25th Annual West Hollywood Women in Leadership Awards and Reception will take place as a virtual celebration. The event is co-sponsored by the City of West Hollywood and its Women’s Advisory Board, and the West Hollywood Chamber of Commerce. This year’s honorees are Katie Brightside, artist/designer and Creative Director, Welcome to the Brightside Agency; Emiliana Guereca, Founder of Women’s March Los Angeles and President of Women’s March Foundation; Silvia Salguero, mental health therapist and former City of West Hollywood Women’s Advisory Board member; and Fran Solomon, community leader and former City staff member. The event will be hosted by comedian and activist Dana Goldberg. In celebration of the 25th anniversary of the West Hollywood Women in Leadership Awards, a suggested donation of $25 may be made as part of the event to benefit the National Council of Jewish Women, Los Angeles (NCJW|LA) and its efforts advancing economic justice and equity for women. Admission and ticket information is available by visiting www.wehowila2021.eventbrite.com.

A full schedule of City of West Hollywood events and meetings is available at www.weho.org/calendar.

The City of West Hollywood has declared a local emergency in response to the coronavirus (COVID-19) outbreak. Individuals are advised to stay at home as much as possible and limit close interactions to those in your household. When in public, community members should maintain your space with social (physical) distancing of at least six feet, and cover your face. Public Health officials recommend that everyone, even those who are vaccinated, to continue to follow physical distancing and infection control directives and wear a clean face covering that securely covers both your nose and mouth when in in public.

West Hollywood City Hall is currently closed to the public and has suspended all in-person transactions. Most public City buildings and facilities remain closed. City Hall remains accessible for business and essential services with transactions to be conducted by phone (323) 848-6400 and via the City’s website at www.weho.org.