There was a new sound echoing through the City of West Hollywood today. In addition to the buzzing of helicopters and distant sirens, there is a scene that resembles the aftermath of the Rodney King riots in 1992. That sound is hammers pounding away on plywood as we witness WeHo Businesses board themselves up to protect their livelihood.

Today marks the sixth day of protests calling for justice in the murder of George Floyd. That’s another day raging with protests, violence and looting in the Greater Los Angeles Area. The City of West Hollywood revised its Executive Emergency Order establishing a curfew in an effort to keep the community safe following the violence and looting from the George Floyd riots. The curfew will be in effect this afternoon, Monday, June 1, 2020 at 4 p.m., ending at sunrise on Tuesday.

The curfew order states: “No person shall be upon the public street, avenue, alley, park, or other public place or unimproved public realty.” This curfew will remain in effect until such time as it is lifted. This curfew is consistent with curfews in the City of Los Angeles and City of Beverly Hills, which neighbor the City of West Hollywood.

The Los Angeles County Sheriff’s Department continues to monitor the situation in the George Floyd protests and will provide education and enforcement regarding the curfew.

Emergency Executive Order 2020-5 (Revised) is available on the City’s website at www.weho.org/home/showdocument?id=46429. 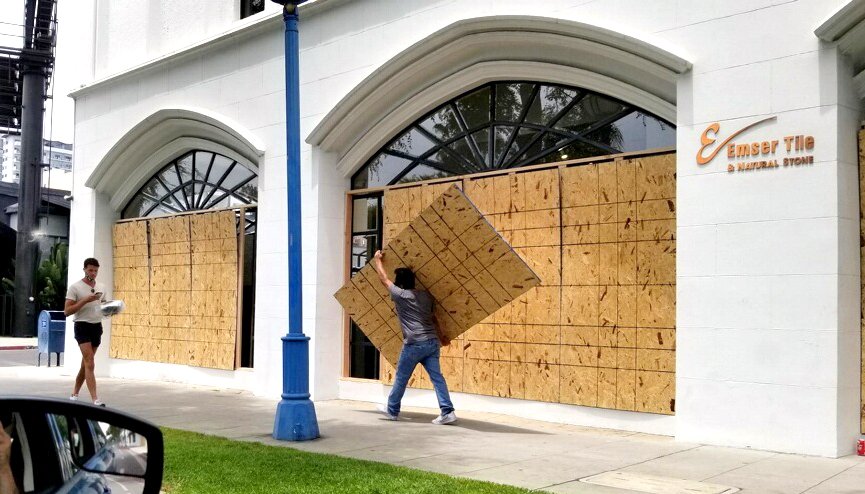 Businesses like Hugos, the Gold Coast bar, Connie & Teds, Candle Delirium, Yogurt Stop and Whole Foods, to name a few, are boarded up and bracing themselves for the worst. Giant dumpsters have been placed at major intersections. There will be road closures to prevent the flow of vehicular traffic into the city during the curfew.

Road closures in West Hollywood are as follows:

“The City of West Hollywood passionately supports the fight against racial injustice and the dismantling of systemic racism,” reads a City press release. “The City respects the rights of peaceful assembly and protest. The City decries violence directed against persons and other acts that threaten public safety. The City’s curfew order is aimed at reducing the potential for violence, damage, threats to public safety, and civil unrest.”