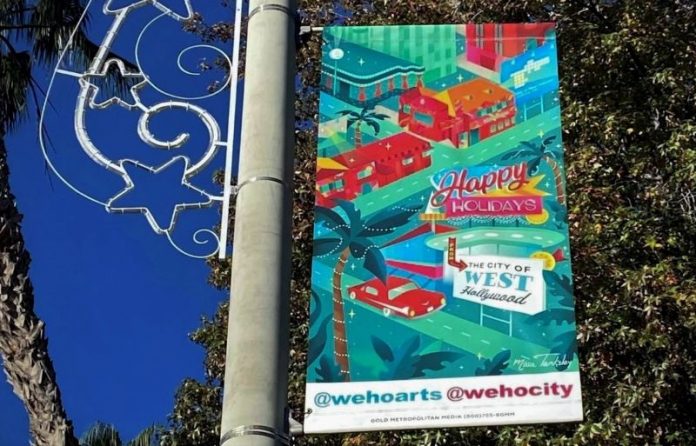 The City of West Hollywood unveiled the artwork for the 2021 Holiday banner and poem. Each year, the City’s Arts Division commissions an artist to create an image to celebrate the holidays, West Hollywood style. These images are printed onto street banners which decorate Santa Monica Blvd, La Brea, and Melrose Avenue in the City of West Hollywood, along with banners from prior years which feature artwork by the artist Shag (Josh Agle).

The 2021 Holiday Banner artist is Mosa Tanksley. Mosa Tanksley is an Italian-born artist living and working in Santa Monica. She has illustrated several published children’s books, freelances regularly for a local magazine, and enjoys taking on new and creative projects. More information at https://mosatanksley.com.

Read the poem is below:

close, the murmur of strangers

under a red marquis, laughing

with the wind. I pack my shadow,

coax him home to feast.

Time bullies her way to the gravy,

babbling all our secrets:

How a family breaks and how

in the absence of sugar.

Me neither. I have nothing

to teach anyone about love

when you’re gone. I wrap

my time and attention, as gifts.

of lost aunts and remembered friends.

Drain fear from our touch.

This year, I promise to make

no demands. Even of myself.

Sway each light to carry us

West Hollywood’s City Poet Laureate highlights the City of West Hollywood through the literary arts and, over a period of time, creates a new body of literary work that commemorates the diversity and vibrancy of the City. He serves as an official ambassador of West Hollywood’s vibrant literary culture, promoting poetry in West Hollywood, stimulating the transformative impact of poetry in the local community, and creating excitement about the written word.

Brian Sonia-Wallace is the fourth West Hollywood City Poet Laureate. He will serve from October 2020-2022.

Since WeHo Reads 2014, Brian Sonia-Wallace has been writing poems for strangers and neighbors on the streets of West Hollywood and at City of West Hollywood events. A social practice poet straddling the lines between literature and community engagement, his 2020 debut from Harper Collins, The Poetry of Strangers: What I Learned Traveling America With a Typewriter, was lauded as “full of optimism and wide-eyed wonder” by The New York Times. Brian’s writing has been published in The Guardian and Rolling Stone, and he teaches creative writing through the UCLA Extension Writers’ Program and Get Lit – Words Ignite. In 2019, Brian received a grant from the City of West Hollywood’s One City One Pride LGBTQ Arts Festival to create Pride Poets, a project which brought poets on typewriters to the streets of West Hollywood to create over 700 original works based on one-on-one interactions, and in 2020 brought together over 100 LGBTQ+ poets for virtual shows during the COVID-19 quarantine. Pride Poets has been featured in The Pride and The Advocate, and Brian’s work has additionally been profiled by The New York Times, The Guardian, The Poetry Foundation, NPR, ABC7, and Telemundo. The motto of his company, RENT Poet (as featured on NPR’s How I Built This), is “everyone needs a poem.” Brian also has an intriguing resume of past projects with public interactions, including being Artist-in-Residence or Writer-in-Residence for the Mall of America, Amtrak, Dollar Shave Club, the City of Los Angeles, and Boston Harbor Islands National Park.

Our new LED “Holiday“ lights are a total disappointment. Lackluster and uninspiring and certainly don’t invoke the holiday spirit.