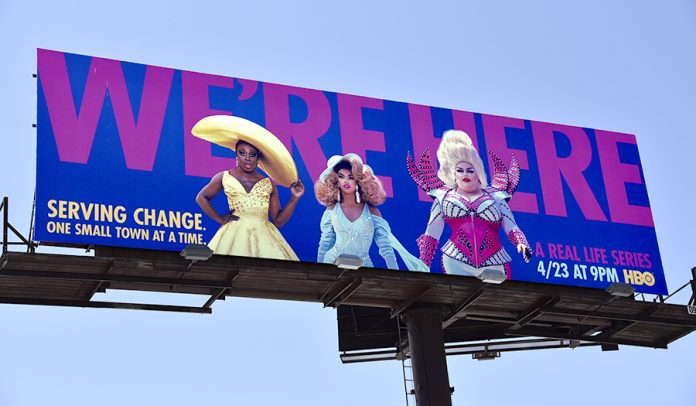 The show is about three drag queens who ride into small towns across the U.S in pursuit of residents to recruit. The first episide is part of a six-part unscripted series. In each episode, drag queens Shangela, Eureka, and Bob the Drag Queen will inspire and teach their own “drag daughters” to step outside their comfort zone for a night of no-holds-barred, full-on drag. Volunteers train and transform into over the top drag characters. The show is meant to inspire small town folks to be true to themselves…in drag. The show seems very To Wong Foo, Thanks for Everything! Julie Newmar, meets Priscilla Queen of the Desert, bumps into Queer Eye for the Straight Guy (the old version) and has some tea with AJ and the Drag Queen (we think…we didn’t actually watch AJ and the Drag Queen).

The standout of the series so far is Shangela Laquifa Wadley, born Darius Jeremy Pierce. The Mother of Dragons was robbed in RuPaul’s Drag Race: All Stars Season 3 where she finished in third/fourth place (thanks in large part to the self-righteous Ben De La Creme). Shangela was the first contestant eliminated in season two of the original RuPaul’s Drag Race. She returned as a surprise contestant in the series’ third season, placing sixth. She returned once again for the third season of RuPaul’s Drag Race: All Stars, where she was slayed when RuPaul left it up to the eliminated queens to decided who would get the big win. They selected the queen who “needed the win the most” over merit (sorry Trixie mattel).

The Mother of Drag-ons would rise in New York magazine’s list as one of the top 100 Most Powerful RuPaul Drag Queens in America in June 2019. And she would become the first queen to walk the Oscars red carpet due to her role in A Star Is Born.

And now she has her own show on HBO. Check out the full first episode below.