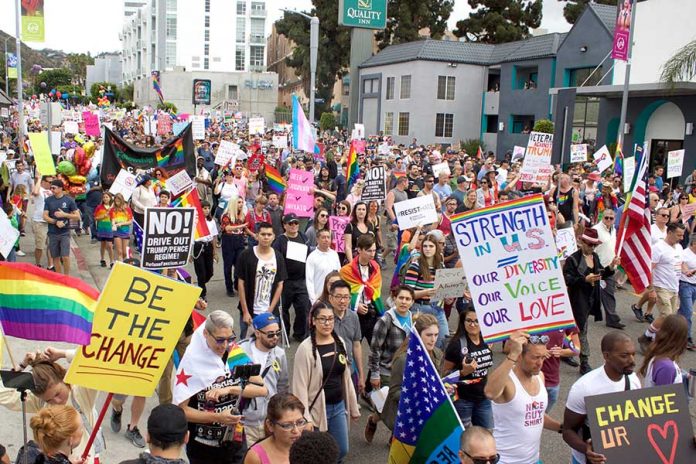 The LA Pride #ResistMarch is now one for the LGBT history books. Most of us will look back on June 11, 2017, and feel the very definition of Pride. We will remember how we woke up at the ass-crack of dawn to march in solidarity with our LGBT brothers and sisters and those who are allied with our continued fight for equality. This time we didn’t just march for LGBT rights, we marched for all human rights; regardless of gender, color, or creed.

Those who skipped the historical moment will remember this chapter of the gay movement a little differently. They slept in that morning and stayed home while people marched down their streets. Then they read all about it on their Facebook feeds. Pity. The march that dared to replace this year’s LA Pride Parade delivered in every way possible. Whether it was 100,000, 50,000, or 25,000 people in attendance (as variously reported), #ResistMarch came off without a hitch. Founder Brian Pendleton and his team of organizers worked tirelessly to make sure the event was safe and peaceful. There was plenty of security. Volunteers stood at every corner to make sure no one lost their way. Giant video screens were erected in the heart of WeHo so that everyone could witness the lineup of amazing speeches and performances. And there were plenty of port-a-potties along Santa Monica Boulevard to provide some relief after the 3-mile walk from Hollywood and Highland to West Hollywood’s Boystown.

The highlight of #ResistMarch was the impressive lineup of speakers at the rallies before and after the March. I mean, come on! We had Los Angeles Mayor Eric Garcetti, RuPaul, Brian Pendleton, LA LGBT Center’s CEO Lorri Jean and others at the rally in Hollywood. And in West Hollywood, people heard from U.S. House Democratic Leader Nancy Pelosi, U.S. Congressman Adam Schiff (one of the men leading the Trump Russian investigation), U.S. Congresswoman Maxine Waters (Auntie Maxine), U.S. Congressman Ted Lieu, and West Hollywood Mayor John Heilman with WeHo council members John Duran and Lindsey Horvath. We had trans activist Bamby Salcedo (she called out the politicians who spoke and asked the crowd to hold them accountable), as well as HRC President Chad Griffin, and Women’s March Founder Emi Guereca, to name a few.