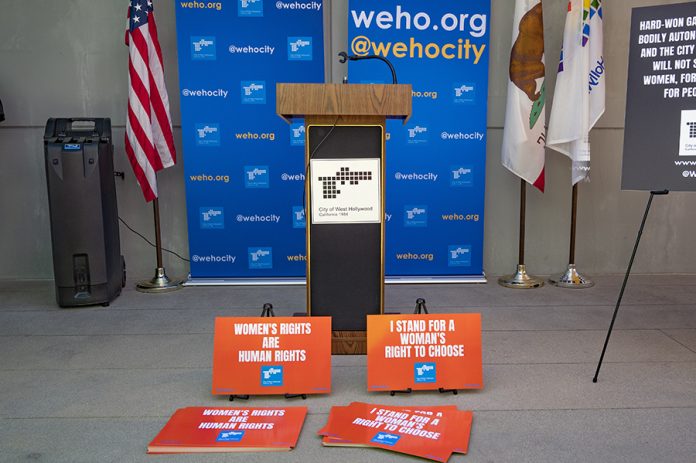 The decision by the Court’s conservative majority overturns Roe v Wade and is expected to lead to abortion bans in roughly half of states. According to the majority opinion by Justice Samuel A. Alito Jr., the Supreme Court of the United States has voted to overturn Roe v. Wade’s holding of a federal constitutional right to an abortion. The landmark US Supreme Court decision was issued in 1973 and legalized abortion in the United States.

The opinion is a full-throated, unflinching repudiation of the 1973 decision which guaranteed federal constitutional protections of abortion rights and a subsequent 1992 decision – Planned Parenthood v. Casey – that largely maintained the right. “Roe was egregiously wrong from the start,” Alito writes.

Although I am not surprised, I am terribly disappointed that SCOTUS would overturn a case that was decided decades ago, by its predecessors,” said City of West Hollywood Mayor Lauren Meister. “Instead of moving forward, the Supreme Court has decided to go back to a time when women were second class citizens, without the right to make personal choices about their own healthcare, their own bodies, or their own well-being. President Biden and Congress must make the right to choose the law of the land. Otherwise, one by one, civil rights will be taken away. The City of West Hollywood must send a very clear message to Washington DC: an attack on women is an attack on LGBTQ people, is an attack on people of color, is an attack on the Jewish community, is an attack on all of us. We cannot be silent, and we will not be silenced.”

“The City of West Hollywood stands with all of those whose lives are now in more danger than ever as a result of this ruling,” said City of West Hollywood Mayor Pro Tempore Sepi Shyne. “This Supreme Court decision sets women’s equality and bodily autonomy back decades. The City has been and will continue to work with Los Angeles County, the State of California, and our social service providers to ensure that we continue to fight for reproductive rights and provide a safe haven for women and transgender men accessing healthcare.”