Urbn Leaf, the first adult use cannabis dispensary to open in West Hollywood on The Sunset Strip, celebrated their grand opening with a ribbon-cutting ceremony by The West Hollywood Chamber of Commerce. The event on Thursday, November 10, 2022 included West Hollywood Mayor, Lauren Meister, and Jackie Rocco, West Hollywood’s Deputy City Manager, and Sol Yamini, the CEO of Pink Dot.

“It is not an easy feat to open a businesses these days,” said Genevieve Morrill, President and CEO of the WeHo Chamber, “It’s not for the timid. It takes a lot of courage.”

Morrill presented the Urbn Leaf team with a framed Buck for Good Luck, a tradition of the Chamber’s that has been around for 101 years. “I’ve seen this dollar rolled up to light up a doobie,” joked Morrill before a large gathering. “You can use this dollar bill to light up a joint, or you can hang it from your office, but we have buck for luck for you.”

Mayor Meister presented the cannabis dispensary with a Certificate of Recognition by the City of West Hollywood, welcoming them to city and wishing them great success.

“I am very excited to be bringing the first adult use cannabis dispensary to the world famous Sunset Strip in West Hollywood,” said Yamini who is partners with Statehouse Holdings, which owns Urbn Leaf. “Now, not only can you get your alcohol delivered by Pink Dot, but you can have your cannabis delivered by Urbn Leaf.” 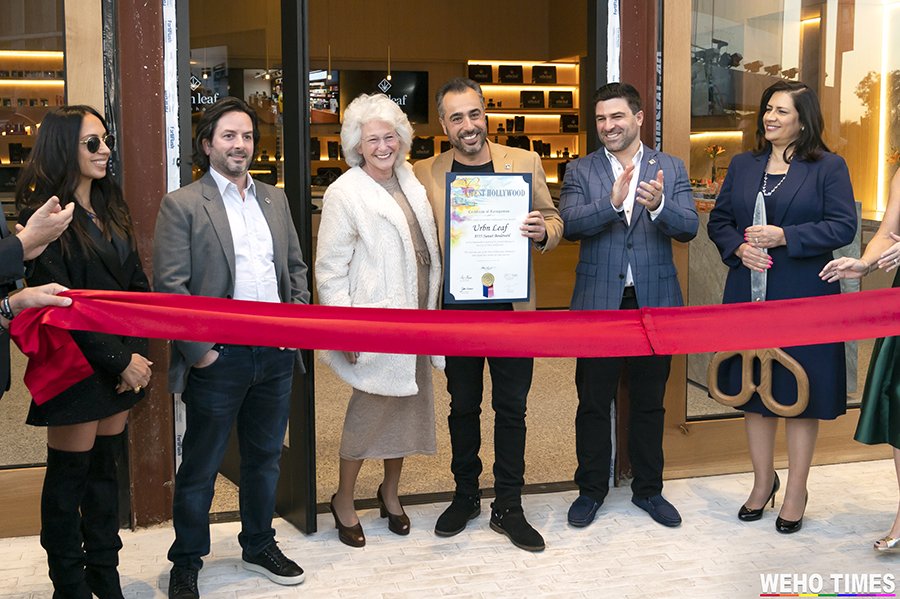 The ribbon-cutting ceremony took place moments before The WeHo Chamber hosted its Creative Business Awards across the street at the 1 Hotel, where they honored Pink Dot and Sol Yamini with The WEHO Chamber of Commerce Creative Business Legacy Award 2022. Urbn Leaf presented Pink Dot with the award.

Statehouse Holding is one of the biggest publicly traded cannabis companies in the State of California, being fully integrated and owning fourteen dispensaries across state, The Sunset Strip location becoming its flagship.

Urbn Leaf calls itself California’s premier cannabis company, featuring comfortable retail spaces and knowledgeable staff that invite inquiry, discovery and conversation. Since 2017, the company has been on a mission to set new standards in the cannabis industry and only source the highest quality products available, and then serve them up in safe, accessible environments.