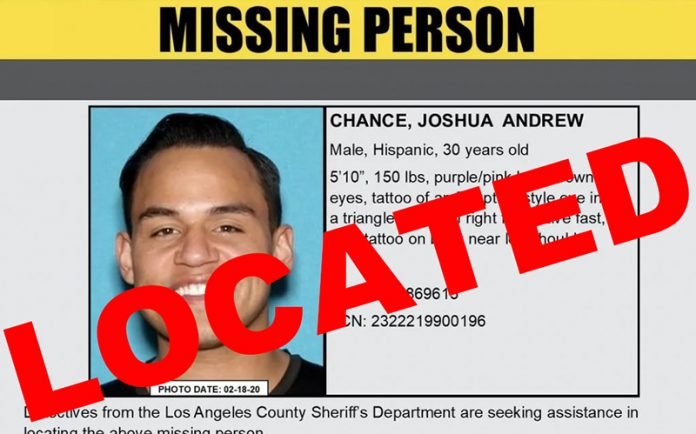 UPDATE: Missing Person Joshua Andrew Chance has ceen Located according to the West Hollywood Sheriff’s. No details have yet been released regarding his disappearance, or how he was found.

The Los Angeles Sheriff’s Department sent a public announcement asking for the public’s help with any information that led to locating 30-year-old, Joshua Andrew Chance, a missing person who was last seen in West Hollywood on July 9, 2022at about 11 p.m. in the 1000 block of North Hayworth Avenue.

Chance is described as Hispanic, 5-feet-10 inches tall and weighing 150 pounds, with purple and pink hair and brown eyes. He also has a tattoo of an Egyptian eye inside a triangle on the top of his right foot and a tattoo with the words “Live fast, die last” on his back near his left shoulder.

If you see something, say something. Anonymous tips can be called in to Crime Stoppers at 800-222-8477 or submitted online at lacrimestoppers.org.

Thank you for following up with the update. Glad to hear he was located.

Nice to hear good news….hope he is OK