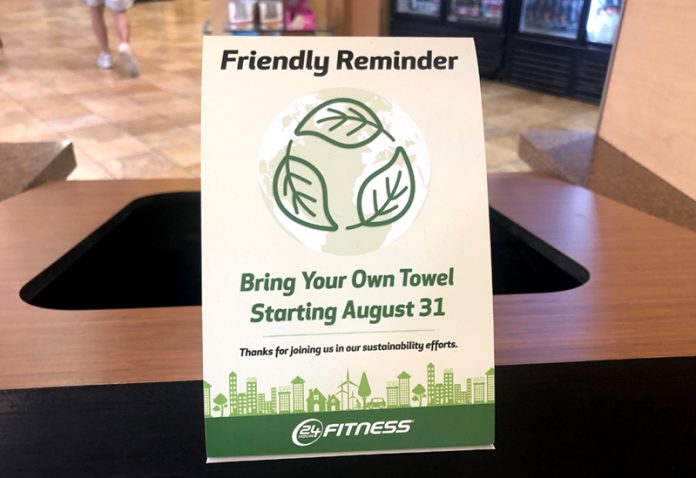 24-Hour Fitness Super Sport WeHo is going green. We reported last month that the West Hollywood gym was discontinuing their towel services at the end of the the summer. An email was sent to members last week announcing the official cutoff time for towel services, which will be at the end of this month, on August 31st. According to the mass email message, the reason for the cutback on towel services is an effort to conserve resources and save the environment.

“Beginning on August 31, we will no longer be offering towel service at our West Hollywood Super Sport club,” read the statement. “This decision supports our sustainability focus and is part of our ongoing efforts to conserve resources to help preserve and protect the environment. By bringing and re-using your own workout towel, you can join us in our commitment to conserve water and energy.”

Although the cutoff time is August 31, there is already a shortage in the towels available to members at the gym. The piles are noticeably less at the front desk and currently there is a limit of one towel per member. There was never a clear limit to towel usage in the past.

Signage has been posted at the front desk of the gym. Some members are asking if they will get a discount on their membership dues, since they were promised towel services upon joining a Super Sport level gym.

A source tells WEHO TIMES some of the employees a worried for their jobs. Especially those who spend most of their work day collecting, laundering and folding towels.

I’m not sure I buy that this is the reason. I heard a very strong rumor that their lease is up at the end of March of next year. And that they will be closing. And that entire complex might be redeveloped. Especially now that LASC is gone. I think they are just trying to cut costs. That place has really gone down hill. The maintenance is really terrible. That tells me that they are probably closing, and they don’t wanna put any money into this club.