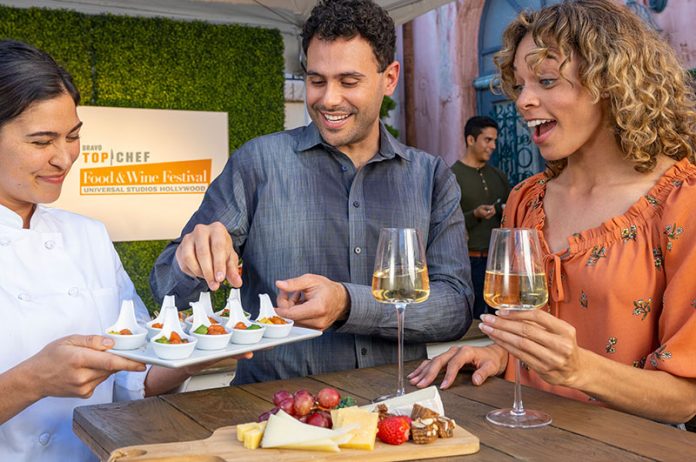 The two-day event will take place at Universal Studios Hollywood and feature wine, craft beer and food stations including a variety of dishes inspired by the Cheftestants’ creations over the life of the series. Guests will have the chance to watch “Top Chef” veterans battle it out in a series of live cooking competitions and attend panel discussions with past competing chefs.

Guests also can purchase a premium VIP ticket inviting them to experience several first-class opportunities including an exclusive tasting and wine paring hosted by a “Top Chef” alums, meet and greet with “Cheftestants,” early access to the theme park, complementary parking and a special gift.

The festival coincides with the latest season premiere of its top rated culinary competion show. Bravo has announced the 15 contestants competing for another shot at culinary supremacy when Top Chef returns for Season 17 with a supersized episode on Thursday, March 19 at 10/9c. The lineup includes finalists, front runners, and fan favorites who wowed us with their culinary skills in seasons past.

“Bravo’s ‘Top Chef’ Food & Wine Festival will give guests an opportunity to interact with their favorite chefs and try the culinary feast firsthand while also giving them a glimpse at the pressure the competitors face in the kitchen with the Quickfire Challenges,” said Ellen Stone, Executive Vice President, Marketing, Lifestyle Networks, NBC Universal.