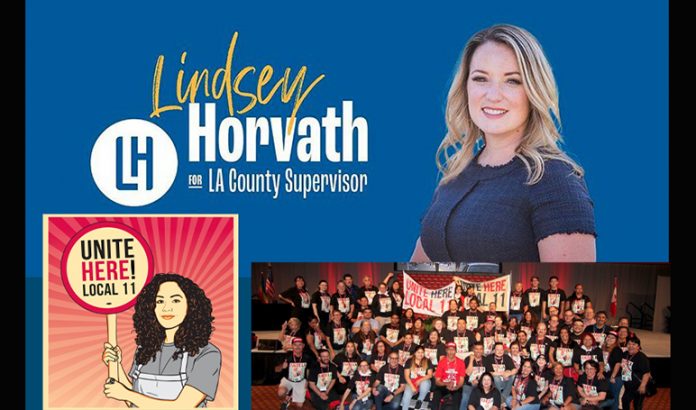 They call her the “Living Wage Hero”. Labor union Unite Here Local 11 announced the endorsement of Lindsey Horvath for Los Angeles County Board of Supervisors District 3. “She was a decisive vote in passing the highest citywide minimum wage in the country.”

Unite Here Local 11 acknoleges Horvath’s victory on the minimum wage for $15 in West Hollywood as early as 2015. “The young Councilmember led the ‘Fight for $15’ in West Hollywood, but despite her advocacy the then-City Council did not pass her proposal,” reads a UNITE HERE statement. “This past summer Horvath became Mayor of the city, and things started to change. Mayor Horvath fought for and won groundbreaking legislation to protect hotel housekeepers from sexual assault, give them the right to return to their jobs by seniority amid the COVID-19 pandemic, and to improve the minimum wage to make sure housekeepers are fairly compensated for heavy workloads. Just months later, Horvath was the deciding vote to pass the highest minimum wage in the country at $17.64, making West Hollywood a national leader on policy for working people.”

“Lindsey exemplifies what it means to be a public servant who fights for working people,” said Kurt Petersen, Co-President of UNITE HERE Local 11. “Our members can count on her no matter what, and that’s who we need to send to the Board of Supervisors.”

“The new minimum wage in West Hollywood will change my life, the lives of hotel workers across town, and all workers,” said Sandra Pellecer, who has worked as a cook in West Hollywood hotels for 16 years. “Lindsey Horvath fought for us and I’m proud to stand with her.”

Lindsey Horvath was the longest, consecutively serving Mayor of West Hollywood, leading the city in 2020 and 2021. She was elected to the West Hollywood City Council in 2015, and previously served from 2009 to 2011. Horvath serves as a leader of West Hollywood and a regional leader in a number of roles, including: Immediate Past President of the California Contract Cities Association (CCCA); Board Member for CalCities (formerly the League of California Cities); Board Member for the National League of Cities (NLC); Immediate Past President of Women in Municipal Government (WIMG) for the National League of Cities; and Executive Committee Member and Legislative & Regulatory Chair for Clean Power Alliance of Southern California.

I endorse her too if it means she will be on her way out of WEHO. She’s SO pathetically phoney.

This reads like a Horvath campaign press release – oh, it is. Of course Unite Here endorsed her, she bought their vote and sold out the West Hollywood hotel industry (workers and management) for Unite Here’s endorsement. She also sold out small business with the minimum wage hike. Horvath would sell her parents to get what she wants. I wouldn’t vote for her ever.