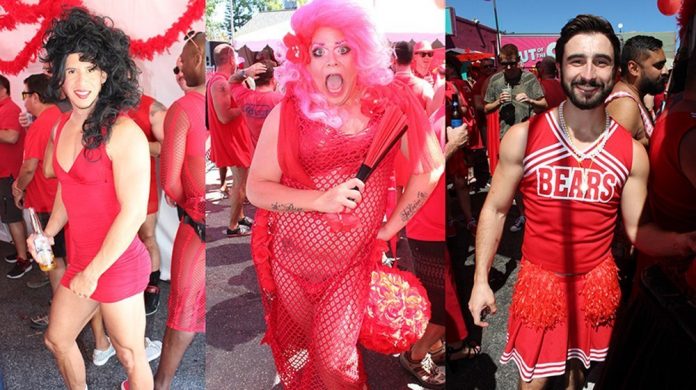 The Red Dress Party fundraiser is BACK in the city of West Hollywood! Trunks Bar is hosting its very first annual Red Dress Party in collaboration with Micky’s WeHo on November 14, 2021. The event is in association with the Sisters of Perpetual Indulgence and the Think Red Project.

The Red Dress Party will be taking place at both bars starting at Trunks Bar from 11 a.m. – 5 p.m. Gert Crawford will be working the red carpet and there will be a special drag show hosted by LaCienega Boulevardéz. The party will continue at Micky’s WeHo at 5 p.m.

The Red Dress has always been a fundraiser benefiting a different LGBT non-profit each year. This year’s event will benefit former employees of the Gold Coast Bar and a gay foundation of their choice. The Gold Coast Bar closed last year due to rent negotiations gone south after being shut down in the middle of the COVID-19 pandemic. It left, bartenders, security guards and barbacks unemployed. 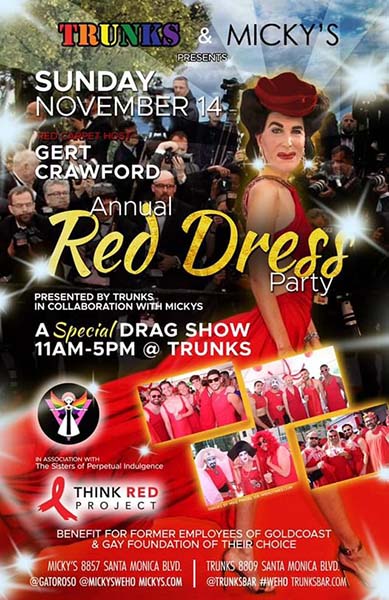 The Red Dress Party fundraiser in West Hollywood debuted on the corner of Santa Monica Boulevard and La Jolla Avenue in 1997. It was created by Gold Coast bartenders, Mark Ferguson and Yves-Claude. Both men were HIV+ during a time when being HIV+ was like a death sentence. The twosome made a pact with each other that whoever passed away first, the other would go to their funeral wearing a red dress. Mark was known for dressing up in drag and visiting some of the HIV/AIDS wards at hospitals. He was also often seen in full drag and hanging out behind the Gold Coast bar. It was his way of making the most out of life and making people laugh.

Gold Coast hosted the Red Dress Party for 23 years. No one had any idea the 2019 event would be its last. Click here to see some photos by Mike Pingel.

The tradition will continue in WeHo next month.

Such a great event having supported and raised much needed funds for 100’s of deserving agency’s and people over the years!… We are honored to have been a previous recipient of the Red Dress Party proceeds! We love you all! Sunnie Rose and The Life Group LA Team!