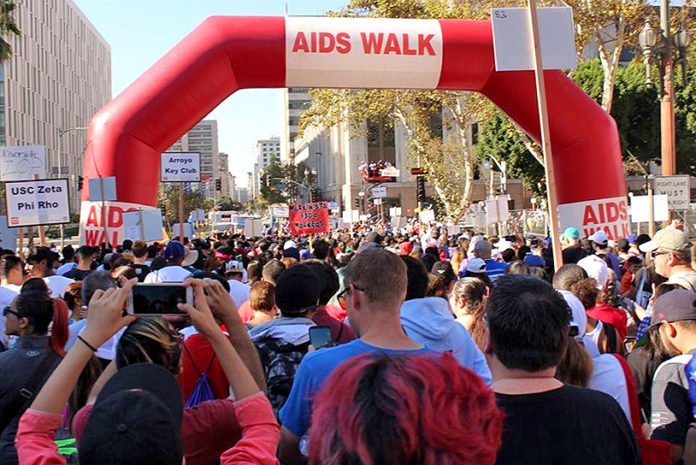 The fight to end HIV/AIDS continues and so do the efforts to raise money to benefit the people affected by the disease with thousands gathered for the 33rd annual AIDS Walk Los Angeles this past weekend.

People from all walks of life pounded the pavement of Downtown Los Angeles for the 10-K to help raise money for AIDS Project LA Health and dozens of other local HIV service organizations, as well efforts to fight in Washington as the current administration threatens to strip away healthcare for millions living with HIV or other pre-existing conditions.

The event started with an opening ceremony at the steps of City Hall with and then weaved through more than six miles of downtown Los Angeles. This year, the event also included a 5-mile run for those up for the challenge.

“I’ve done the AIDS WALK for many years.” said WEHO TIMES contributor Mike Pingel. “It’s always moving to see people wearing t-shirts in memory of who they are walking for. It was also amazing to see the major sponsors such as American Airlines, Starbucks, and other major companies supporting the event. It’s great bringing the community together to help others.”

According to Pingel, raising money for the event was a challenge this year. “I think donations were down this year du to all the horrible things happening with the hurricanes, the fires and the crisis in Puerto Rico. Everyone is really stretched with money right now and that really effected donations, at least for me personally. I think regardless of where money is going, we still need to have a dialogue about HIV/AIDS. People think the epidemic is over with the success of drugs such as PrEP, but there are still people out there getting infected by HIV every day. Despite our advances, people still need to take precautions and get tested regularly.”

AIDS Walk Los Angeles has raised more than $82 million since the walk began in 1985. It stands as the world’s first walk to fight an epidemic. It has drawn hundreds of thousands of supporters to walk, and millions more to donate. Raising funds at the event remain a vital lifeline that sustains APLA Health’s prevention, care, and advocacy programs for the thousands of men, women, and families affected by the disease in Los Angeles County. Proceeds also benefit more than 20 other HIV/AIDS service organizations that are able to participate and raise funds through the Community Coalition Initiative (CCI).