Lady Gaga’s “Born This Way” played over a crowd of people  holding rainbow flags and signage that read “Love Wins,” “Love Conquers Hate” and “A Supreme Day to Be Gay in the USA.” 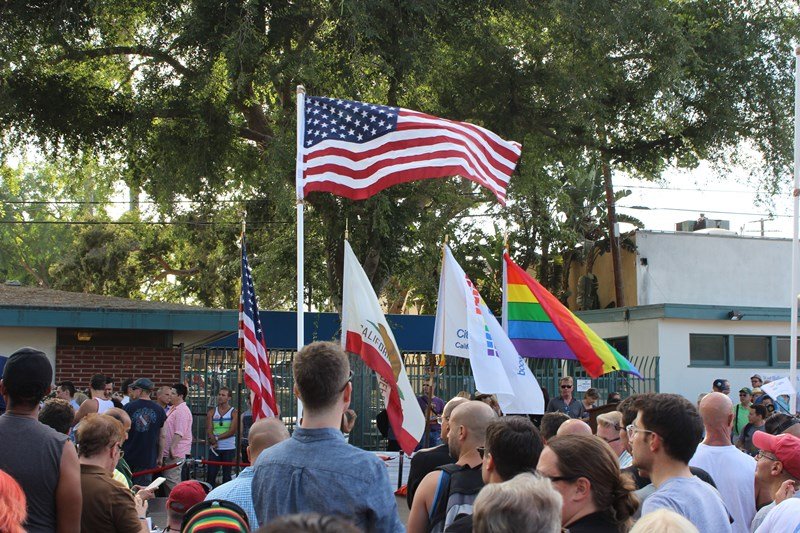 Los Angeles LGBT Center CEO, Lorri L. Jean, was the first to speak. She rejoiced at how the U.S. Constitution finally includes LGBTQ people. “As the confederate flag is falling, the rainbow flag is raising,” she said. “If God is with someone, she is with us.”

Tamika Butler, of the National Center for Lesbian Rights told the crowd that the fight continues for civil rights. West Hollywood council member John D’Amico locked lips with his husband Keith Rand who has been by his side for 23 years. And West Hollywood council member John Duran spoke of the AIDS crisis and how the price paid for this victory was high, but the victory is “so sweet.”

The U.S. Supreme Court decision required the 13 states that do not permit same-sex marriage to lift the ban for marriage equality. At the time the United States joined 19 countries around the world where same sex is now legal.

This look back at the Decision Day Rally in West Hollywood falls days after the United State’s Supreme Court’s conservative majority overturned Roe v Wade, which is expected to lead to abortion bans in roughly half of states. According to the majority opinion by Justice Samuel A. Alito Jr., the Supreme Court of the United States has voted to overturn Roe v. Wade’s holding of a federal constitutional right to an abortion. The landmark US Supreme Court decision was issued in 1973 and legalized abortion in the United States. The opinion is a full-throated, unflinching repudiation of the 1973 decision which guaranteed federal constitutional protections of abortion rights and a subsequent 1992 decision – Planned Parenthood v. Casey – that largely maintained the right. “Roe was egregiously wrong from the start,” Alito writes.