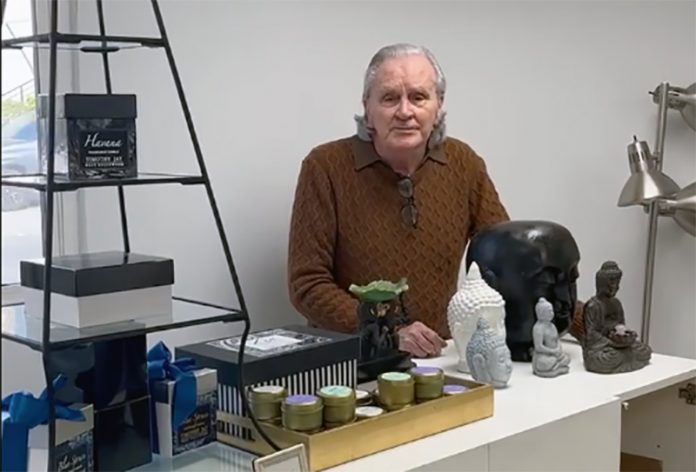 The new, NEW home for fragrance and candle studio, Timothy Jay Candles, is at 8272 S. Sunset Blvd. Candlemaker Tim Sullivan tells WEHO TIMES the first location on Santa Monica Boulevard fell through during final negotiations and he had to scramble to find a new location as the deadline approached to vacate from N Harper Avenue at the end of January, where he had been running his small business for 24 years.

“Welcome to the new home to Timothy Jay, Year of the Tiger day two.” He said in a video posted on February 2nd. “We’re trying to get our section in order, so you can come and visit our new digs. Everything is working out perfectly. Buddha is here facing the door to welcome you, so come when you can to 8272. S. Sunset Boulevard.”

The boutique had till the end of January to vacate the premises after being at that space since 1998. Sullivan, who founded the small business 24 years ago, reached out to the community to help him find a new space. “I’m being told that I must vacate my store because someone else has taken the entire property over,” he said via a Facebook post. “If you hear of any stores available or space available, please contact me. I appreciate it. Thank you so much.”

Sullivan first considered moving to Holloway Drive, west of La Cienega Boulevard, but parking was an issue and he didn’t see too much walking traffic. He kept searching until he found a new space on historical Route 66 at 7209 Santa Monica Boulevard, but the landlord at that location had too many rules, so the lease agreement fell through. He continued searching and managed to keep his business in West Hollywood, and is now located on The Sunset Strip near The Naughty Pig restaurant and bar.

The famed artisan studio in West Hollywood is known for creating handmade fragrance candles for private label and international clients. “An intricate process, but everything is done by hand,” reads a post on the business website. “We work in stages melting and pouring the wax hand-placing the wicks and letting them dry properly for 24 hours”

The early days of Timothy Jay Candles can be found in their About Page:

“It’s a phenomenon…a little studio tucked away on a side street in West Hollywood producing thousands and thousands of candles for stores such as Saks Fifth Avenue, landmarks like the Beverly Hills Hotel and the famous clothing designer Dana Buchman!

In 1998, when I moved in, we had to clear out the remnants of a dry cleaner that had been in the location for years. Slowly, garment trolleys disappeared and long tables were installed to hold the products and materials needed to produce our candles. Soon “locals” were wandering in, following the trail of fantastic fragrances that had wafted into the air. They stayed to watch us hand pouring and the entire process and were fascinated and amazed that we were able to handle such quantities. Orders and Private Labels started rolling in. We needed a “front” to keep in tune with the changing neighborhood, so I designed a small “Studio” space that worked for both clients and the walk-ins.

You might say the whole process is of another time … a time when artisans we’re proud of their work and when finished products were the direct result of hand work rather than machines. I like it that way and I must say … so do my customers!”

Very nice that worked out for him