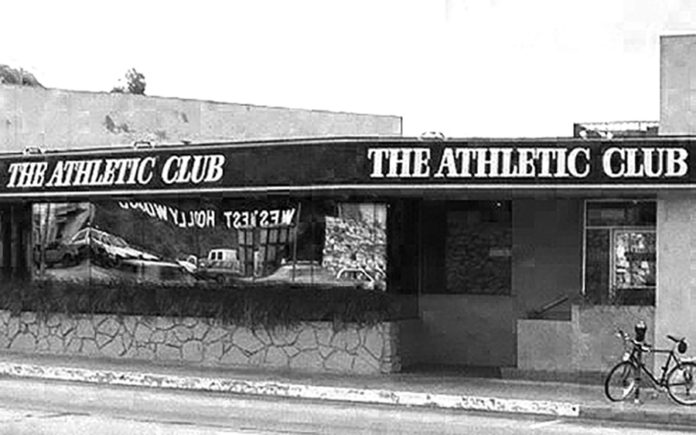 Here’s a Throwback Thursday to The Athletic Club West Hollywood–a gym that was popular in the 80s to mid-90s, and could date back to the late 60s/early 70s.

The gym was located in WeHo’s Boystown on the south-side corner of where Santa Monica Boulevard and Huntly Drive meet, across the street from where the Shake Shack now stands. It used to be next door to the long defunct The Palms lesbian bar, and a few retails stores down from what was then The Sports Connection (Sports Erection, Sports Infection), before it was taken over by 24-Hour Fitness.

The men’s only gym was smaller than its sister gym down the street. It was more private and personal with a rather pretentious setup. They offered a towel service when you walked through the door, which was mighty fancy back then. A pool was the focal point in the backyard area that was mostly for show or for the gay guys who wanted to show off, because all eyes were on the queen who dared to get their hair wet in that pool and risk having their bleach blonde locks turn neon lemon green. The lounge chairs around the pool were surrounded by palm trees, birds of paradise and other foliage that gave it a gay resort appeal. The no-women rule allowed the place to offer rooftop sunbathing in the NUDE, so you best BELIEVE there was some serious splatter of man chowder on that poor sundeck.

There was also a small Café that was $5.00 too highly-priced for the microwaveable crap they sold, and–oh yeah, they also offered some workout equipment, if you were into that sort of thing.

I’ve heard many different takes on the history of The Athletic Club and the Sports Connection. The latter used to be called The Beverly Hills Gym way back in the olden days. It used to be a men’s only club and The Athletic Club there was a separate, smaller gym for women up the street. Somewhere along the historical lines, the gyms sort of switched roles; the men’s Beverly Hills Gym became the unisex Sports Connection and the women’s smaller gym would later became the men’s-only Athletic Club—or so the story would go according to word-of-mouth from some of the old members who gave West Hollywood history lessons at the front desk of the Sports Connection.

There were also rumors about how the gyms used to be owned by mobsters and they had gambling casinos in the gym’s basement where the men’s locker room is now located. One member told us that Bugsy Seigel came up with the blueprints for the development of Las Vegas in that basement, but I’m not so sure I believe all that nonsense (much).

The gym struggled to stay open. It was a little too exclusive for its own good. The owners in the mid 90s were friends with everyone, so everyone wanted discounts and complimentary passes. Desperate times called for the owners to change its men-only policy and allowed women to also join––not that women tore down the doors to join; they were only allowed to use the workout facilities, but would have to change into their workout clothes in a bathroom the size of a closet. The presence of women meant no more nudie sunbathing, which also meant no more gay oasis, and before too long the Athletic Club was no more.

It became a World’s Gym in the mid-90’s, before it went out of business again and stayed closed for a while. Then it opened again as a World’s Gym, only to close down again–this time permanently.

Some may recall a controversy surrounding the very last owner who sold yearly membership contracts under Worlds Gym to the very last day it was open. The guy skipped town shortly after. Many in the community felt he got away with fraud because he was cute and he was sweet, which is how things went down in West Hollywood back then. Anyway, most people don’t really give a care, but the old Athletic Club gym is one of those tiny specs of West Hollywood history. The building remained empty for over 15 years. Then it was bulldozed completely. The lot remains empty to this day. New development is underway promising retail at the bottom and condos on top.

And the rest as they say, is herstory.

Paulo Murillohttps://wehotimes.com
Paulo Murillo is Editor in Chief and Publisher of WEHO TIMES. He brings over 20 years of experience as a columnist, reporter, and photo journalist. Murillo began his professional writing career as the author of “Love Ya, Mean It,” an irreverent and sometimes controversial West Hollywood lifestyle column for FAB! newspaper. His work has appeared in numerous print and online publications, which include the “Hot Topic” column in Frontiers magazine, where he covered breaking news and local events in West Hollywood. He can be reached at editor@wehotimes.com
RELATED ARTICLES
Historical WeHo

I loved and still miss the Athletic Club; when I hear music from that time it still makes me feel nostalgic. It was wonderful to be able to workout shirtless and then play with a beautiful man or 2 afterwards. When I first moved to LA in 1990 and lived in Sherman Oaks, I would always go there if I felt lonely or bored. There was often somebody there to talk to and it become my home away from home for my first few years here. I had so many hot sexy encounters there in the steam room, tanning area,… Read more »

I remember the Athletic Club so well. I was so in love with a blond dude named Marc Donnally and another guy named Rob something, a dentist I think. Never got to do either one, damn!. That place was a whore house with weights and I loved it! The rooftop was insane! So many hot men! Oh the good ol days!!