On Saturday, November 7, 2020, The Associated Press, CNN, The New York Times, BBC, CBS, Fox News, and NBC News announced that Joe Biden and Kamala Harris are the projected winners of the 2020 U.S. presidential election. Biden surpassed the 270 electoral votes necessary to become the 46th President. He currently stands at 290 electorial votes beating incumbent Donald Trump who is currently at 214.

Thousands upon thousands of supporters of the Biden ticket from all over the Greater Los Angeles area drove to West Hollywood to celebrate today’s big win for the Democratic party. Vehicles formed long lines up and down Santa Monica Boulevard. People honked their horns and held up traffic throughout most of today as crowds cheered jubilantly and waved Biden flags.

There were also anti-Trump signages, as they headed towards Beverly Hills to crash a Trump Rally taking place by the Beverly Hills Sign. The Trump rally has been taking place every Saturday afternoon for the past several months—however, the mood in West Hollywood was festive. People sang and cheered out of their car windows to the crowds of people standing on the streets.

We spotted newly elected council member John Erickson on the street. Like the Biden/Kamala ticket, Erickson ran a successful campaign and came in second to Sepi Shyne opening the path to one of two seats that were open on the West Hollywood City Council.

The celebration continued into the evening hours. West Hollywood’s Boystown (or LGBT Rainbow district) resembled a busy night like Halloween or LA Pride, both of which were canceled due to the coronavirus pandemic.

The Biden/Kamala celebration in the streets of West Hollywood echoed similar demonstrations all over Los Angels and sevaral parts of the country.

Biden made history in the 2020 election for receiving the highest number of votes in a presidential election. Harris will be the first Black woman to serve as the vice president. Both candidates will be sworn into office as president and vice president on Inauguration Day (January 20, 2021), once the Electoral College casts and counts its ballots in the coming month. 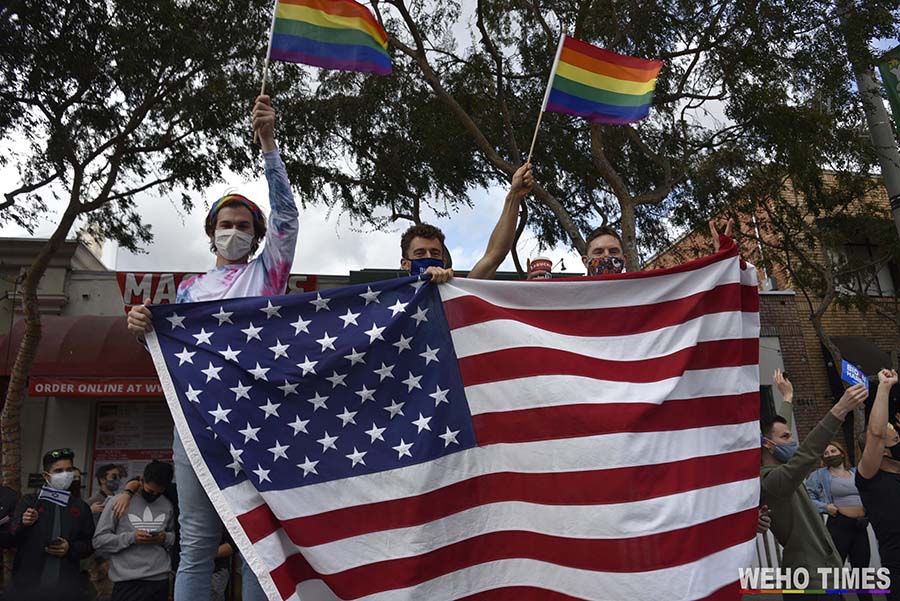