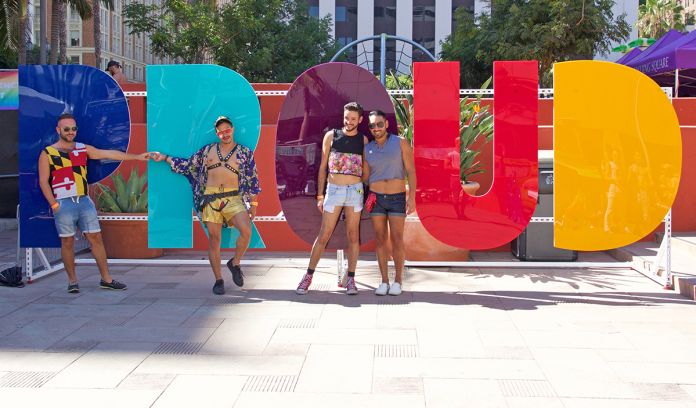 DTLA Proud Festival grows in its third year with a third day added to this year’s festivities. The quirky festival that celebrates all things queer is hitting Pershing Square on the weekend of August 24, 25 & 25. It promises to be bigger and wetter than ever before.

The weekend will be packed with LGBTQ+ culture, history, and diversity in the concrete jungle of Downtown Los Angeles. The DTLA PROUD Festival returns with a featured main stage, pop-up water park, community and vendor booths, art installations, bars, food trucks, and a diverse mix of people from all over the greater Los Angeles area, including a great portion of West Hollywood.

The event faced permit challenges this year, forcing organizers to make Saturday and Sunday 21+ only. In an effort to be all-inclusive, the festival added a free event on Friday for all ages. The free admission may be gratis, but you still need a ticket to get in. Those tickets can be downloaded here.

The 2nd annual DTLA PROUD Gala is also back at Otium in downtown LA, on August 20th. The event honors supporters, community leaders, elected officials, and sponsors. The event will offer live DJ sets by DJ Whitney Day, hor’dourves handcrafted by renowned chef Timothy Hollingsworth, fine cocktails and nonstop shenanigans by Mistress of Ceremony Pinche Queen. There will also be a silent auction and other surprise treats. Tickets are $150 per person, $250 per duo and $600 per group of six. 100 percent of the proceeds will go toward the capital campaign to build the DTLA PROUD Community Center. Valet parking is available but we recommend using your favorite ride share service.

To purchase tickets to the DTLA PROUD Gala, visit: dtlaproud.org/gala.

DTLA Proud is a 501(c)(3) non-profit organization with a mission to strengthen and empower the local LGBTQ+ & ally community in Downtown Los Angeles through visibility, volunteerism, partnerships and events. They are committed to celebrating everyone’s story, spreading optimism, growing community and expanding the definition of diversity. Founded by a grassroots group of local residents, business owners, community leaders and nightlife promoters, the festival was born from the idea that together we could create an all-inclusive festival that represents the diverse LGBTQ+ population that lives, works and plays in the thriving heart of the city of Los Angeles.