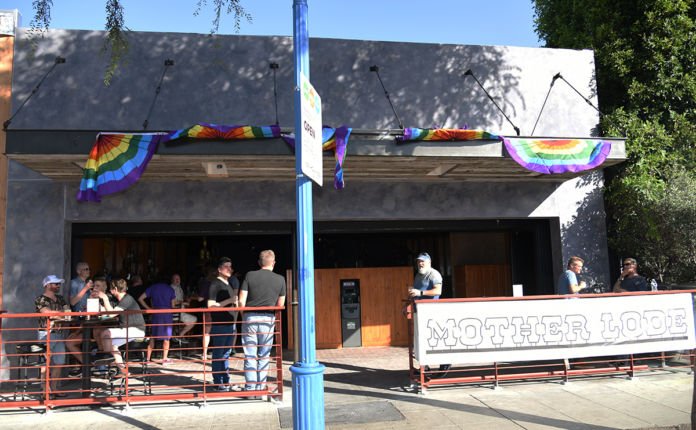 Beloved gay bar, the Mother Lode, believed to be the oldest gay bar in West Hollywood’s Boystown, revealed its new face just in time for LA Pride this weekend. And like a lot of the faces that we see in WeHo, the change is drastic.

The plywood that has covered the bar for the past 9 months or so, has come down to reveal an entirely different facade from its original storefront. Gone is the familiar face of yesteryear to welcome a new airy and open space with sliding glass doors and a much bigger patio. There is clearly still much work to be done, but Wehoans finally get a peek behind the bandages, so to speak.

WEHO TIMES reported last November that the construction would be finished by this past December. Co-owner Bob also told us that they were merely adding a larger patio and some plants, but judging from this recent reveal, the front has gotten a complete makeover. The bar looks open and airy. Gone is the wooden exterior for a more concrete front setting. The interior remains the same and holds true to its historical significance. Both bars inside are the same, the pool table and TVs are are intact, but the sunlight light and the breeze that we now get gives a completely different feel.

“I think this should’ve been done years ago,” said Mother Lode patron Charles. “I remember Mother Lode from 20 years ago and to open it up like this is great. I’m a fan.” “I think it’s very good that they opened it up a bit,” said Shawn Kennedy, a pastry chef at Bottega Louie, who has been coming to Mother Lode for about two years. “You can no longer call it a manhole, it’s so open. I definitely love it. It’s very spacious. It gives you more room to conversate and be yourself. When you look at the features of the roof and the details in the patio, it actually brings back an authenticity to the old parts. There is a very rustic look to it. I feel like we’re going to have more people come here now that it’s more open.” “It looks nice and all, but I like the old dirty Mother Lode,” said one patron who chose to remain nameless. “Look, I get it, you have to compete to survive in this day and age, but that’s what I don’t about it. It’s open air like and exposed like The Rage and Micky’s. If we wanted that, then we would go there for that. I loved the old grungy Mother Lode, but I would rather have a new and improved Mother Lode, than no Mother Lode at all.

Mother Lode dates back to 1979. It is unclear if the original Mother Lode sign is going up eventually, or if that too will be new and improved. Right now there is a banner hanging outside the patio. The place was clearly revealed prematurely to cash on the LA Pride festivities.

Mother Lode is clearly not going anywhere. It continues to be open for business and will hopefully attract a whole new clientele. So check out the new Mother Lode in West Hollywood. And tell us what ya think.