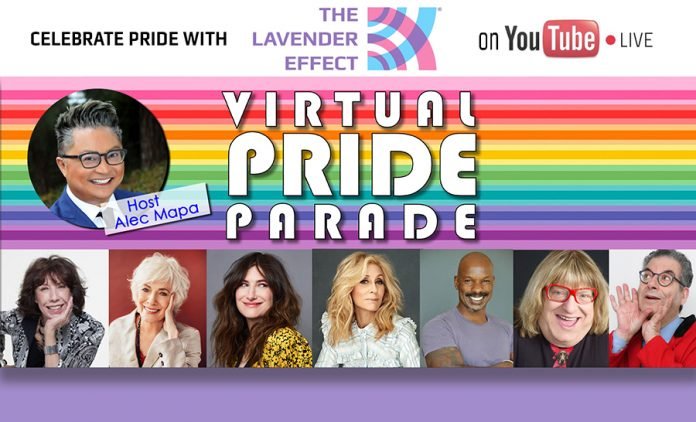 The Lavender Effect’s Virtual Pride Parade started today, Sunday, May 30, 2021 at 12 p.m. The star-studded event will be broadcast live via YouTube.com/c/TheLavenderEffect.

This year’s Virtual Pride Parade’s Host and Grand Marshall is Alec Mapa. Mapa’s TV and film credits include Ugly Betty, Switched at Birth, Doom Patrol, You Don’t Mess with The Zohan and Connie and Carla. He lives in Los Angeles with his husband Jamison and Son Zion.

The Virtual Pride Parade will launch Pride Month and benefit THE LAVENDER EFFECT’s mission to Advance the Future of LGBTQ+ Heritage & Culture. While many local Pride celebrations again are being canceled or modified this year due to the continuing COVID-19 pandemic, many members of the community will not be able to gather in person, so this live virtual event will safely bring the LGBTQ+ community together from across the nation to celebrate Pride.

THE LAVENDER EFFECT has another stellar roster of some of the most well-known LGBTQ+ celebrities and allies, non-profits, and activists from around the globe, to help to bring the community together including:

To learn more about the Lavender Effect, visit http://www.thelavendereffect.org.