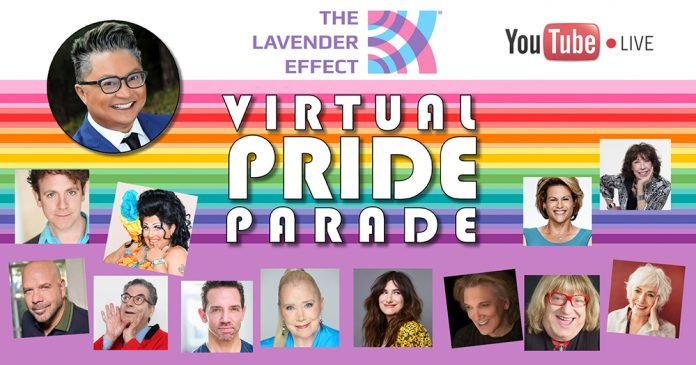 THE LAVENDER EFFECT® returns with star-studded live Virtual Pride Parade. The show will broadcast on Sunday, May 30, 2021 at 12 noon PST/3p EST via YouTube.com/c/TheLavenderEffect.

This year’s Virtual PRIDE Parade’s host will be Alec Mapa. Mapa’s TV and film credits include Ugly Betty, Switched at Birth, Doom Patrol, You Don’t Mess with The Zohan and Connie and Carla. He lives in Los Angeles with his husband Jamison and Son Zion.

“As the LGBTQ+ community comes together for PRIDE again this year, we continue to find ourselves in a new normal. Once again, PRIDE will be celebrated safely throughout the country this year. We wanted to continue our outreach to everyone with our 2nd Virtual PRIDE Parade online this year.” said Andy Sacher, Founder & Executive Director of THE LAVENDER EFFECT®. He continued “We celebrate our LGBTQ+ PRIDE with our diverse sisters & brothers in a way that everyone can join, no matter where they are or how they express their PRIDE!”

The Virtual Pride Parade will launch Pride Month and benefit THE LAVENDER EFFECT’s mission to Advance the Future of LGBTQ+ Heritage & Culture. While many local Pride celebrations again are being canceled or modified this year due to the continuing COVID-19 pandemic, many members of the community will not be able to gather in person, so this live virtual event will safely bring the LGBTQ+ community together from across the nation to celebrate Pride.

“PRIDE is here again,” said Lily Tomlin. “I’m so excited to return to all the fun with THE LAVENDER EFFECT’S Virtual Pride Parade. PRIDE is LOVE and let’s share the love with each other. Happy Pride everyone!”

“You won’t believe this year’s Virtual Pride Parade,” said actor/comedian Bruce Vilanch. “It will be the gayest thing to happen since I revealed that I changed my name from Caitlyn.”

THE LAVENDER EFFECT has another stellar roster of some of the most well-known LGBTQ+ celebrities and allies, non-profits, and activists from around the globe, to help to bring the community together including:

Last year, during the height of the COVID-19 pandemic and lockdowns, THE LAVENDER EFFECT® hosted the first “Virtual Pride Parade” to celebrate Pride and bring the LGBTQ+ community together. The live fundraising event featured celebrities, national LGBTQ+ organizations and politicians and over 10,000 viewed from around the country.

THE LAVENDER EFFECT® is a nonprofit project of Community Partners that is advancing the future of LGBTQ Heritage & Culture. The organization helps to reduce shame, combat homophobia and empower LGBTQ+ youth through programs like the Virtual Pride Parade, Oral History Projects, and educational programs. For more information, please visit http://www.TheLavenderEffect.org.