The gutting of the what was once the Gold Coast Bar, has begun this week. The space located at 8228 Santa Monica Boulevard, on the corner of Santa Monica Boulevard and North La Jolla Avenue is generating some attention on social media for the large pile of debris at the parking lot behind the bar, next to what is widely known as Vaseline Alley.

Photos taken by WEHO TIMES of the interior show the space is completely empty. Light fixtures are gone, as well some gold brass railings and other trimmings. The gold piping around the bar is also gone, but the actual bar itself appears intact. It is not yet clear if the bar has a new owner, or if the space is being prepped for showings to potential tenants. 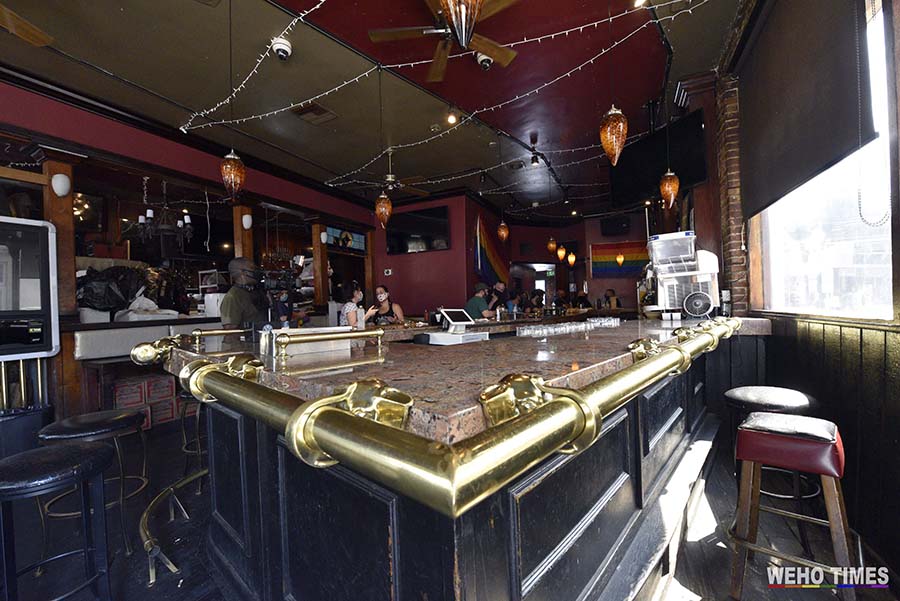 One of the oldest bars in West Hollywood, The Gold Coast Bar closed in September 2020 after serving the LGBT community for 39 years. One of the bar’s former owners, Bryan Worl confirmed the closing of the queer space via a Facebook post stating that the GC was “closing for good” back in September 24th. He stated that the COVID-19 pandemic and sour rent negotiations contributed to the bar’s closure.

Worl, who owned the bar with his partner Robert Hastings, hosted an open house to allow loyal patrons to say goodbye to the space.

“We were trying to figure things out, Worl told WEHO TIMES at the open house. “People were talking to us about purchasing the property. Monte [Overstreet] told me they wanted to sell the property. Our lease was up on, I believe April, 2021. We tried to to contact them several times with letters and they never responded to us. We tried to ask them to extend our lease and we got zero reply from them. If they would’ve handled it then, maybe it wouldn’t’ve sold, but then the pandemic came and now we’re in this position.”

The Gold Coast space and the Out of the Closet Thrift Store next door are among several WeHo properties owned by Monte Overstreet. Out of the Closet is currently going through some renovations and shows no signs that is closing any time soon.

The Gold Coast Bar was known for being an unassuming gay bar with a happy hour and late-night drink specials. The bar hosted several fundraisers which includes the ever popular Red Dress Party.

This Overstreet guy seems to be behind alot of WeHo spots closing – he doesn’t seem to be very interested in preserving anything of West Hollywood. Sounds like a greedy jerk if you ask me.