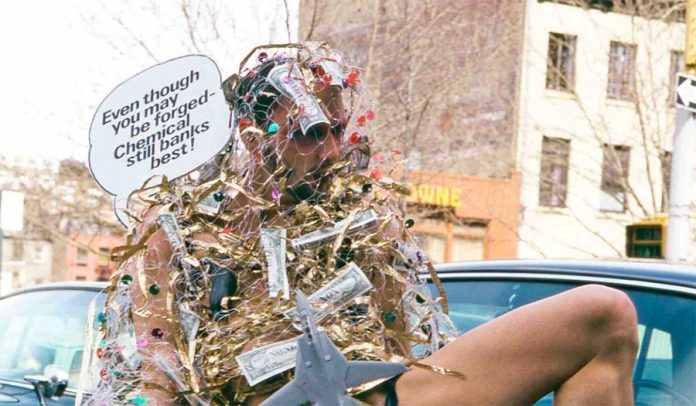 This exhibition focuses on the collaboration of genderqueer performance artist Stephen Varble with the photographer Greg Day. It explores the ways in which Varble’s disruptive guerilla performance art has lived on through vibrant photographs that captured his inventive costumes, transformed trash, and public confrontations.

In costumes made from street trash, food waste, and stolen objects, Stephen Varble (1946–1984) took to the streets of 1970s New York City to perform his “Gutter Art.” While maintaining he/him as his pronouns, Varble performed gender as an open question in both his life and his work, sometimes identifying as a female persona, Marie Debris, and sometimes playing up his appearance as a gay man. Only later would the term “genderqueer” emerge to describe the kind of self-made, non-binary gender options that Varble adopted throughout his life.

At the pinnacle moment of Varble’s public performances, the photographer Greg Day (b. 1944) captured the inventiveness and energy of Varble’s genderqueer costume confrontations. The story of Varble told through Day’s photographs is both about their synergistic artistic friendship and about the queer networks and communities that made such an anti-institutional and genderqueer practice imaginable. Together, Varble and Day worked to preserve the radical potential of Gutter Art for the future.