The Comedy Store Celebrates 50 Years on The Sunset Strip 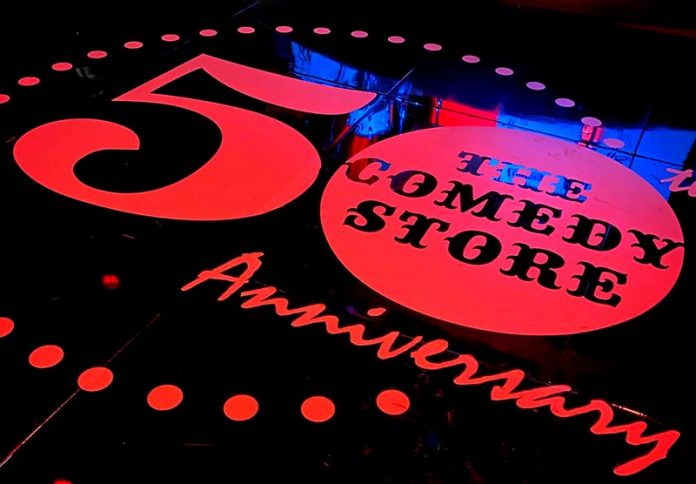 The Comedy Store building was the former of home of Club Seville (1935), which later became Ciro’s (1940–1957), a popular Hollywood nightclub owned by William Wilkerson, and later Ciro’s Le Disc, a rock and roll venue, where The Byrds were discovered in 1964.

When the venue reopened as The Comedy Store in 1972, it included a 99-seat theatre. As a result of a divorce settlement, Mitzi Shore began operating the club in 1973, and she was able to buy the building in 1976. She immediately renovated and expanded the club to include a 450-seat main room.

In 1974, The Comedy Store hosted the wedding reception of newlyweds Liza Minnelli and Jack Haley, Jr. The Comedy Club signage was covered, for the evening, by signs reading “Ciro’s”, denoting the venue’s prior identity. The event was attended by many dozens of Hollywood glitterati, including Elizabeth Taylor, Sammy Davis Jr., Cher, Bob Fosse, Johnny Carson, Goldie Hawn, Cesar Romero, Priscilla Presley and other stars, past and present.

The Comedy Store website states that the venue is one woman’s dream in a three-showroom palace. The palace is the Comedy Store, the dream is an artist’s colony of stand-up comedians and that woman is the legendary Mitzi Shore, part-Ziegfeld, part Garbo, part Picasso and all heart. Born and raised in Wisconsin, she married into the world of stand-up comedy in the 1950s when she met Sammy Shore while she worked in a Wisconsin resort one summer. Mitzi quickly became den mother to her husband’s cohort of fellow young comics—Shecky Green, Buddy Hackett, Don Rickles, Shelley Berman Alan King, and Rodney Dangerfield—all future Vegas superstars. Mitzi also became close to Elvis Presley when Sammy opened for him for three straight years at the Las Vegas Hilton. During this time, Mitzi and Sammy produced four children, Scott and Sandi in the mid-50s, and Peter and Pauly in the late ‘60s. They did so well opening for Elvis that they decided to open a little 99-seat club on the Sunset Strip where Sammy and his peers could keep their material sharp. In their kitchen up on Doheny Drive, Mitzi suggested to Sammy, “Let’s call it the Comedy Store! – a switch on a famous Beverly Hills discotheque called The Candy Store. The Candy Store now long-forgotten, The Comedy Store is the most famous nightclub in the world.