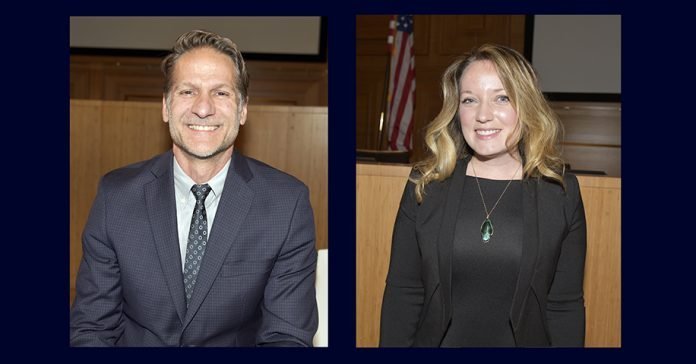 Mayor John D’Amico has been a resident of West Hollywood for more than 25 years. Cities are never finished and West Hollywood is no exception: expanding culture making opportunities, creating elevated design and resiliency standards, and participating in long-term, city-wide planning efforts that improve and protect housing options for everyone at every level are at the center of Mayor D’Amico’s work. He holds two Master’s Degrees, one in Architecture and Urban Planning from the University of Houston, and the other in Aesthetics and Politics from the California Institute of the Arts. He has more than 20 years of experience in large-scale project planning and management at UCLA, ABC, the Walt Disney Studios, and the affordable housing developer, Los Angeles Housing Partnership.

Mayor Pro Tempore Lindsey P. Horvath has a long history of civic and social justice advocacy. She has spearheaded policies to make West Hollywood an “Age-Friendly Community” to better serve residents of all ages. She created the first-ever West Hollywood Community Response Team to Domestic Violence, and initiated policies such as paid family leave, student loan debt relief, and workplace transition guidelines to support workers in the City of West Hollywood. She has worked on a broad range of transportation and mobility issues, and currently serves as Chair of the Transportation, Communication, and Public Works Committee for the California League of Cities. She brought forward policies to reduce traffic and parking problems, and to make West Hollywood more bike and pedestrian friendly. Through her leadership, West Hollywood was named “The Most Walkable” city in California. Mayor Pro Tempore Horvath is widely known for her leadership on women’s issues and serves as First Vice President of Women in Municipal Government (WIMG) for the National League of Cities. She also represents the City of West Hollywood on the Board for Clean Power Alliance of Southern California; the Los Angeles County Sanitation District; and on the Liability Trust Fund Claims Board and Oversight Committee. In addition to her service as an elected official, Mayor Pro Tempore Horvath works as an entertainment advertising executive, and has created award-winning campaigns for movies and television. Mayor Pro Tempore Horvath graduated Cum Laude with a B.A. in Political Science and Gender Studies from the University of Notre Dame.

The City of West Hollywood is like no other city in the world. Located in the heart of metropolitan Los Angeles, the city was incorporated in 1984 by a unique collaboration of people including LGBT activists, seniors, and advocates for affordable housing. At only 1.9 square miles, West Hollywood is a robust economic and cultural center instilled with idealism, creativity, and innovation. A spirit of community activism and civic pride thrives in West Hollywood for many of its approximately 35,000 residents and the city has a strong progressive political voice.

West Hollywood works diligently to defend the fundamental rights of its community members including LGBT people, people with disabilities, seniors, people of color, immigrants, women, and others. The city is one of the most outspoken advocates anywhere for the legal rights of LGBT people; more than 40 percent of residents in West Hollywood identify as LGBT. The city also prides itself on being a safe space. Regardless of nationality or immigration status, the City of West Hollywood has a commitment to promoting social justice and equal rights.