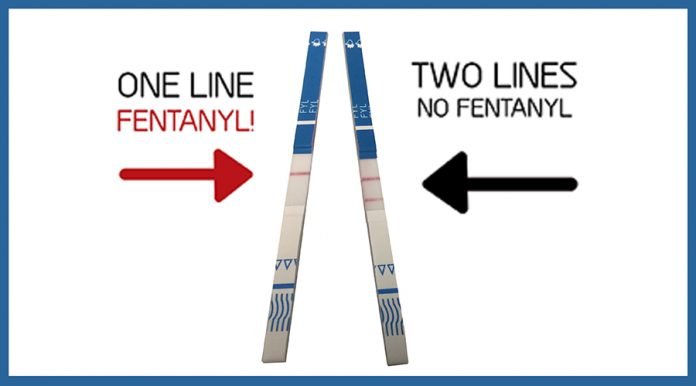 The city of West Hollywood is discussing drug use and harm reduction at the next regular city council meeting this Monday, April 15, 2019. The meeting will specifically focus on opioids such as fentanyl and consider augmenting existing social services contracts
to provide additional funding for prevention and harm reduction strategies through outreach, fentanyl testing strips.

The background analysis on this week’s council agenda is as follows:

In the last decade, the number of opioid overdoses has dramatically increased
nationwide and more focus has been placed on addressing this epidemic. Opioids are a
class of drugs that include the illegal drug heroin, synthetic opioids such as fentanyl,
and pain relievers available legally by prescription, such as OxyContin, codeine,
morphine, etc. According to the National Institute on Drug Abuse, in 2016, synthetic
opioids were involved in nearly 50% (19,413) of the opioid-related deaths, up from 14%
(3,007) in 2010. The number continues to increase annually, with roughly 28,400 deaths
from overdoses involving synthetic opioids in 2017, an almost 47% increase from the
previous year.

The dramatic rise in synthetic opioid overdose deaths has been driven primarily by a
rise in deaths involving fentanyl, which is manufactured legally for medical use, but can also be produced illicitly and sold on the illegal drug market. The drug is 50 to 100 times
more potent than morphine and the intervention period for a fentanyl overdose can be
as short as 45 seconds. Illegal fentanyl can be sold as a powder, in eye droppers or
nasal sprays, or made into pills that look like real prescription opioids.

Because of fentanyl’s potency and the dangers associated with drugs laced with
fentanyl, several Councilmembers asked staff to provide information regarding the
current status of opioid use in the context of West Hollywood, as well as possible
proactive steps to address this issue. West Hollywood has higher rates of drug misuse
compared to Los Angeles County overall; however, the rates of opioid use and
overdose have not risen in West Hollywood as dramatically as they have in other areas
of the country.

In March 2019, the City’s Public Safety Department presented a report to the City
Council that included a report from the Los Angeles County Sheriff’s Department
Narcotics Bureau on the number of drug arrests. The report shows that there were 104
arrests for methamphetamine between July 2018 and December 2018. During the same
period, there were 14 arrests for cocaine, 8 arrests for heroin, 2 arrests for prescription
drugs, 5 arrests for GHB, and 4 arrests for MOMA. This data highlights the fact that
opioids have not impacted the West Hollywood community as much as some other
drugs have, specifically methamphetamines. However, nationally fentanyl is
increasingly being mixed with other drugs such as heroin, cocaine, methamphetamine,
and MOMA, which increases the risk of overdose from these substances. This is
because it takes very little to produce a high with fentanyl, and it can be a cheaper
option. Drugs laced with fentanyl can be especially dangerous because it is done with or
without user knowledge. This is a national trend the City continues to monitor to see
how it may impact our local community.

Harm Reduction and Overdose Prevention
The City of West Hollywood, through its Social Services Division, has an on-going
commitment to providing resources and programming to community members facing
addiction issues. The City contracts with agencies to provide a variety of programs to
address substance use, including residential treatment, transitional housing, outpatient
substance abuse treatment, and street outreach. The City’s HIV and Substance Abuse
Providers meetings occur bi-monthly and usually draw 20-30 agency representatives
who serve West Hollywood and the surrounding communities. The goal of these
meetings is to learn about programs and services, share information, and discuss timely
topics related to HIV and substance abuse.

There are harm reduction techniques that can potentially help avoid opioid-related
overdoses. For the past few years, the California Department of Public Health has
developed a comprehensive approach to address the opioid epidemic in the state,
which includes a public education campaign, providing county health departments with
Naloxone, and working to make fentanyl test strips available to drug users.

Law enforcement personnel are often the first to arrive at the scene of a medical
emergency. Equipping law enforcement personnel with naloxone is an effective tool to
help patients suffering from opioid overdose emergencies who require immediate
assistance. West Hollywood Sheriff’s Stations Deputies all have Narcan with them
when they are on duty. The Sheriff’s Department has also received training on the use
of Narcan and opioid use, including how to address drug prevention, intervention, and
rehabilitation.

Fentanyl test strips are a form of inexpensive drug testing technology that has been
shown to be effective at detecting the presence of fentanyl and fentanyl-analogs in drug
samples prior to ingestion. In order to use the test strips, testers dissolve a small
amount of substance in water, and then dip the test strip into the liquid for 15 seconds.
The test strip is then set on a flat surface until results appear, usually within 5 minutes.
One line indicates fentanyl is present in the sample; two lines indicate a negative result.
The use of fentanyl test strips may reduce the likelihood of fentanyl-related overdoses.
Fentanyl test strips are a reliable, common-sense means of providing people at risk of
fentanyl exposure with more information that may increase their safety. The goal of the
fentanyl test strips is to prevent deaths due to overdose and help engage people who
inject drugs in care. Individuals who may initially request overdose prevention support
can also be linked to other needed health and social services, such as HIV and hepatitis
C testing, medical care, and substance use disorder treatment.

Although fentanyl test strips have shown promise in reducing fentanyl-related overdose deaths, they do have some limitations. There is variability in the illegal manufacturing of
fentanyl and there may be false negative screenings. There is also emerging evidence
that the test strips may be cross-reactive with methamphetamine, which requires the
sample to be diluted in a greater amount of water to produce accurate results. Even with
certain limitations, test strips are an effective harm reduction tool that can minimize the
tragic and dangerous impacts of illicit drug use.

Test strips are made available through the California Syringe Exchange Supply
Clearinghouse. In 2017, approximately 46,000 test strips were supplied to syringe
services programs. The Los Angeles LGBT Center’s Addiction Recovery Service and
AIDS Project Los Angeles (APLA) Health are two local agencies that have worked to
increase the availability of harm reduction tools such as fentanyl test strips in West
Hollywood and the Greater Los Angeles area.

This item requests direction from the City Council on augmenting existing Social
Services contract agreements to increase the amount of funding available for fentanyl
test strips and to create a public education campaign regarding the potential risks of
drug use and fentanyl-laced drugs. If the City Council wants to move forward with
allocating additional resources, Social Services staff will return to City Council with the
amendments to the Agreements for Services for approval.

The regularly scheduled City Council meeting this Monday, April 15, starts at 6:30pm at Council Chambers, located at 625 N. San Vicente Boulevard. Please note, due to park construction, the only way to access the City’s parking structure is from San Vicente.

The meeting will stream live on the city’s website at https://www.weho.org/city-government/wehotv.