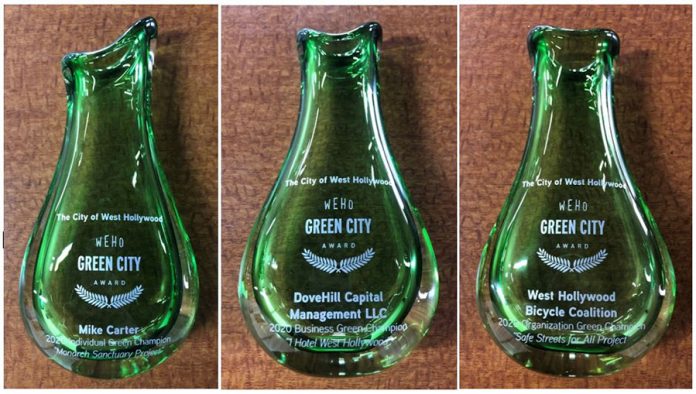 In other green Weho news… The City of West Hollywood will host inaugural Green City Awards ceremony on Wednesday, September 9, 2020, at 6:30pm. The city will honor three “Green Champions” in recognition of projects and practices that demonstrate excellence in environmental sustainability.

The Green City Awards program is administered by the City of West Hollywood and members of the City’s Public Facilities Commission. The three award categories are for Individual, Businesses, and Nonprofit Organization/School. The City will bestow awards recognizing Mike Carter for the “Monarch Sanctuary Project;” DoveHill Capital Management LLC for “1 Hotel West Hollywood;” and, the West Hollywood Bicycle Coalition for the “Safe Streets for All Project.”

The Green City Awards ceremony will be part of the Public Facilities Commission’s annual televised meeting. The event will be held virtually via teleconference and it will broadcast live on WeHoTV and on Spectrum Channel 10 in West Hollywood. For more information, please visit www.weho.org/calendar.

In the spirit of “think globally, act locally,” the City of West Hollywood hopes to inspire more green projects and more green leaders in the community. Local green actions are one way the City builds its community resilience and collectively contributes to combating climate change.

Mike Carter’s “Monarch Sanctuary Project” is an example of an individual’s ongoing effort to raise local awareness for the habitat creation and preservation of the western monarch butterfly, an important pollinator species in California that is suffering severe population decline. Carter encourages all of West Hollywood to pitch in and purchase plants — both native milkweed and nectar — to help increase the monarch butterflies’ feeding and breeding locations.

“1 Hotel West Hollywood” is a completed project by DoveHill Capital Management LLC located at 8490 Sunset Blvd. The sustainability components of this submission focus on two urban gardens (2,000 square feet in total), locally sourced lumber, and bringing nature center stage into the hotel experience through biophilic design. From planters to the reception desks and the lobby area, every log is sourced within 50 miles and “resulting in an exceptionally light carbon footprint.” The project showcases how a circular economy approach provides myriad benefits to the execution of construction projects. Additionally, this project is open to the public and aspires to provide a local, natural refuge not only to the community but to nature and the local wildlife.

The West Hollywood Bicycle Coalition’s “Safe Streets for All Project” is an ongoing project led by a local nonprofit organization with an emphasis “to make safe, complete and sustainable streets available to all by promoting bike-oriented services, advocacy, education and projects that benefit all road users.” Notable contributions by the Coalition to the West Hollywood community include providing input on City planning and implementation projects, holding educational programs about bicycle safety and road use laws, facilitating communications between law enforcement and the bicycle community, holding community bike rides, and bicycle advocacy. This project is also remarkable because it illustrates the important role that nonprofit organizations play in advancing shared goals and outcomes.

The City of West Hollywood is dedicated to sustainability and preserving our environment. One of the City of West Hollywood’s core values is Respect for the Environment and the City has a strong record of developing and instituting progressive and forward-thinking environmental policies. In 2011, the City released its Climate Action Plan, which is designed to address climate change and reduce the community’s greenhouse gas emissions at the local level. Although climate change is a global problem, the City recognizes that many strategies to adapt to a changing climate are best enacted at the local level. The City’s is currently updating its Climate Action Plan to further champion the actions needed to meet the global challenges of climate change and reaffirm West Hollywood as a vibrant and sustainable leadership city for current and future generations.