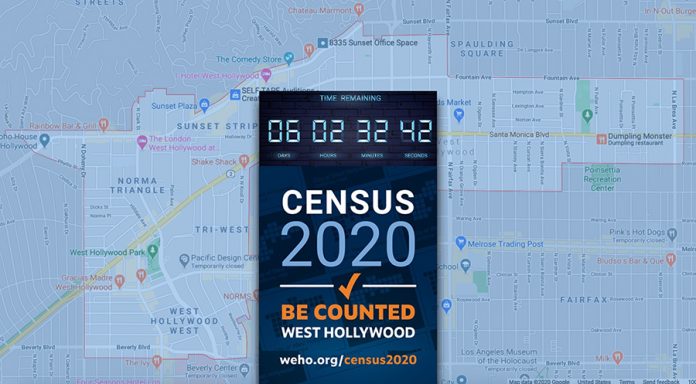 The City of West Hollywood is once again making an urgent call for residents to take action and complete the 2020 Census. A seven-day countdown began today. It is not too late “Be Counted West Hollywood,” but it will be after September 30th.

The city is reminding WeHo residents that the Census is vitally important. Community members who have not yet completed the Census can quickly and easily take the census in just five minutes at https://census.ca.gov. Census responses are safe and secure. Information collected in the 2020 Census cannot be shared with or by other governmental agencies.

The United States Census Bureau has announced that Census counting will cease on September 30, 2020. The California Census has added a “Get Out The Count” countdown timer to its website, which is counting down each second in order to emphasize the urgency with which Census organizers are working to ensure a complete count.

The Census will decide how billions of federal dollars are distributed throughout the nation during the next decade. If response rates do not improve, the resulting undercount may negatively impact funding for schools, health services, childcare, emergency services, and many other programs in West Hollywood and across California. Response rates from the 2020 Census will also affect federal representation until 2030. The apportionment of California’s members of Congress and number of votes in the Electoral College may be negatively impacted by an undercount.

The 2020 Census is available in 13 languages and there are options for people who are Deaf and hard of hearing. Visit the California 2020 Census website to learn more. Census staffers are working in the field and are currently knocking on doors in the City of West Hollywood to follow up with households that have not yet responded to the Census. To learn more about how to identify a Census worker, click here.