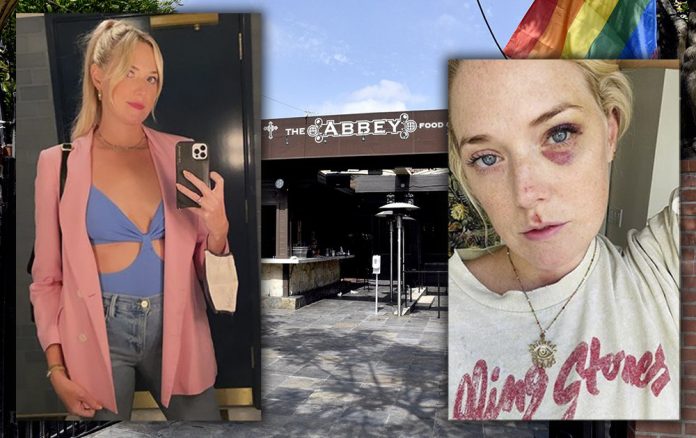 WEHO TIMES confirm a story published by Radar Online reporting that the Abbey Food & Bar has filed a lawsuit against Haely White, the woman who alleged she was drugged by a bartender employed at the popular gay bar and restaurant late last month. The Abbey states the accusations are intentionally false and reckless.

“On Thursday night 7/29, I believe I was severely drugged (“roofied”) by a bartender at one of LA’s most popular gay bars, The Abbey,” reads her previous post. “Within 15 minutes having half of my ONLY drink there, I collapsed, vomited at the bar and continued until I got home. I couldn’t function. I barely made it inside my home (see: face). I’m happy I’m alive to share this. If you know me, you understand this would never happen to me. Not a huge drinker, plus I never vomit when drinking.”

The Abbey promptly responded to the accusation stating that it would conduct its own investigation via video footage tracing her steps the moment she stepped into the bar.

After watching camera footage of her every move at the Abbey, White determined she was mistaken. She retracted her comment and apologized to the The Abbey and its staff. She also admitted she had made this accusation before towards a different bar after being shown evidence as such.

“I now believe that what happened to me that night was not the fault of The Abbey or their staff,” she posted on her Instagram account. “I also want to apologize to everyone to the extent some of my statements were inaccurate in any way. I apologize to any Abbey employees who’ve been negatively impacted or threatened in the wake of my comments.”

The post alleging she was “roofied” was taken down, along with the calls to boycott the Abbey following her allegations.

However, a few days later Haely then followed up her apology with more details on what she witnessed in the video footage suggesting she may still believe she was drugged at the bar.

“Hello, my loves: I wanted to again thank everyone for their support this past week,” reads her post. “In my quest to ensure the safety of my community, it became something far bigger than I anticipated and there are others’ stories that deserve follow up and attention.

I have heard from hundreds of people who felt they may have been drugged, but were baffled by seeing video footage where you don’t see anything unusual placed in their drink. It was overwhelming to hear from so many people thinking they were drugged on some occasion, and the frustration of lacking concrete answers. What is clear more than anything, regardless of my posts, this is a societal issue that must be addressed.

Since earlier publicly posted details lacked key information, it’s important you hear the entirety of what happened. The video footage that I have reviewed does not show the bartender placing anything in my drink. There is an important additional detail – the footage also shows me collapsing off the seat at a booth not long after having my drink. It shows me being assisted out of the bar by a friend and amazing women I didn’t know. I am deeply touched by the women who stepped in to ensure I was okay. Thank you, kind strangers, wherever you are.

You also should know that I was completely coherent in a phone conversation with my husband just 15 minutes before entering the bar, and didn’t get my drink at The Abbey until nearly 30 minutes after arriving, at least a full hour after a drink I had at dinner. I also have NEVER felt so sick in my life with the one exception— when I was roofied many years ago. I know my body and my limits, and it was very disturbing that I could be rendered unconscious so quickly.

I mostly want to say I’m touched by the outpouring of support and, I (and many others) hear your stories. I’m still behind you and hope each can be resolved in a way that allows the truth to come out. Much love, always ~haely”

A representative for The Abbey tells WEHO TIMES, the bar filed a suit against Ms White yesterday with the Los Angeles County Superior Court. Her lawyers are telling people the suit is not real and making news sources take down their stories.

In the lawsuit obtained by Radar, the Abbey is suing White for the “intentionally false and dangerously reckless” allegations she made in posts that have gone viral. “There is video footage accounting for nearly every minute of her stay at The Abbey on the evening on July 29, 2021, except for the 11 minutes in which she and her female companion were in the restroom together.”

The Abbey also alleges it has suffered a loss in business due to her false statements and that White’s accusations have resulted in a “flood of attacks on the reputation of The Abbey” and “threats of physical harm to its staff.”

Radar further reports that the lawsuit points out The Abbey and White agreed to the terms of a settlement agreement, in which she would take down all of her original allegations and share with her followers a “Corrective Statement” by August 14 at 4 PM PST.

The Abbey warned that it would take legal action against false accusations intended to hurt its establishment when the accusation was first made by White.

It has delivered on that promise with a lawsuit of 5 Million Dollars.

White’s allegation that she was drugged at the Abbey prompted the City of West Hollywood to make a statement about Nightlife Public Safety.

“The City of West Hollywood works every day to raise awareness about social responsibility and alcohol with an effort called Imbibe Intelligently, which promotes safety tips and messages regarding alcohol consumption within the community and for visitors enjoying nightlife,” reads en excerpt from the statement. “Tips to Imbibe Intelligently are provided on the City’s website at www.weho.org/socialresponsibility and tips are provided in outdoor media in the community and in the City’s social media @wehocity.”

The full statement can be found here.

Paulo, I believe there is a factual error here. The apology statement she made was not very clear but I do not think she herself made any prior accusations against a previous bar. My reading of that statement was that she found an accusation made by someone else… Probably doing “research online“ and attributed that statement by another person, to the abbey, when it didn’t involve the alley at all. In other words it was not a claim made by her personally except That it was something she found on the Internet and misattributed the story.

This accuser attempted to capitalize on her social media influence and harness the emotional charge of the #metoo/“Believe Women” era to level very serious criminal allegations without evidence that ultimately turned out to be false and defamatory—libeling an innocent worker and his employer—as they were wholly contradicted by comprehensive video evidence. Their lawsuit is, in my view, entirely appropriate. Quite apart from the damage her claims have done to an individual earning a day-to-day living and an organization that has stood as an economic, entertainment, and political pillar to the Los Angeles LGBTQ+ community for a generation, I cannot abide… Read more »

I’m glad the Abbey is suing this woman. She was looking for a payday. She should be banned from West Hollywood eating and drinking establishments. Gold Diggers are not wanted here.

LOL except gold-diggers abound in masses in Weho. You think all the twinkies with the older sugar daddies are parading around the strip out of love?

Kind of reads a little bit like a SLAPP suit on the part of the Abbey, ever if her comments aren’t true. Unless she made up the whole incident or drugged herself there isn’t really a suit here.

Incorrect. She is clearly guilty of libel toward the bar which is illegal in CA. The liar will pay dearly. Cooley has Deep pockets and he’s not about to take sheit from some bimbo influencer!

This is not just a libel action. She previously entered into a settlement agreement and then violated the terms. This is also breach-of-contract suit.

It is prima facie defamation.