Home News THANK YOU FOR THE LOVE! WeHo Times at WeHo Pride Parade

WEHO TIMES marched and rode down Santa Monica Boulevard for West Hollywood’s inaugural WeHo Pride Parade on Sunday June 5, 2022, from Crescent Heights to Robertson Boulevard. It was West Hollywood history in the making and we had to be part of this community effort to celebrate all things pride on Pride Month.

I’m still recovering from this past weekend. My voice is shot, I’m completely sunburned, despite spraying myself down with a thick layer of SPF 100, and everything hurts, mostly from standing around for three hours while we waited our turn to march. 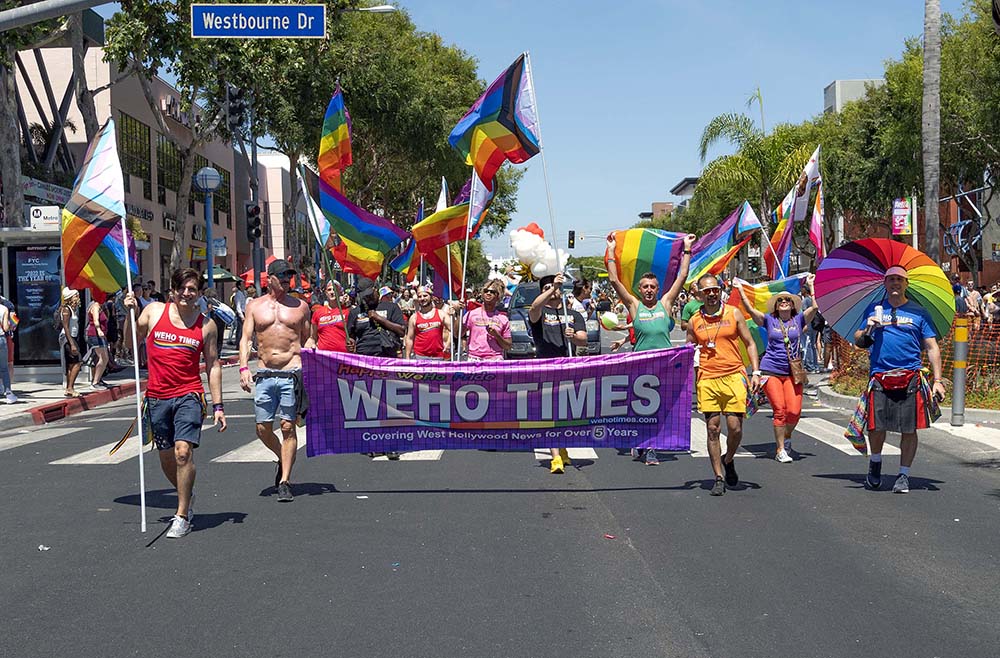 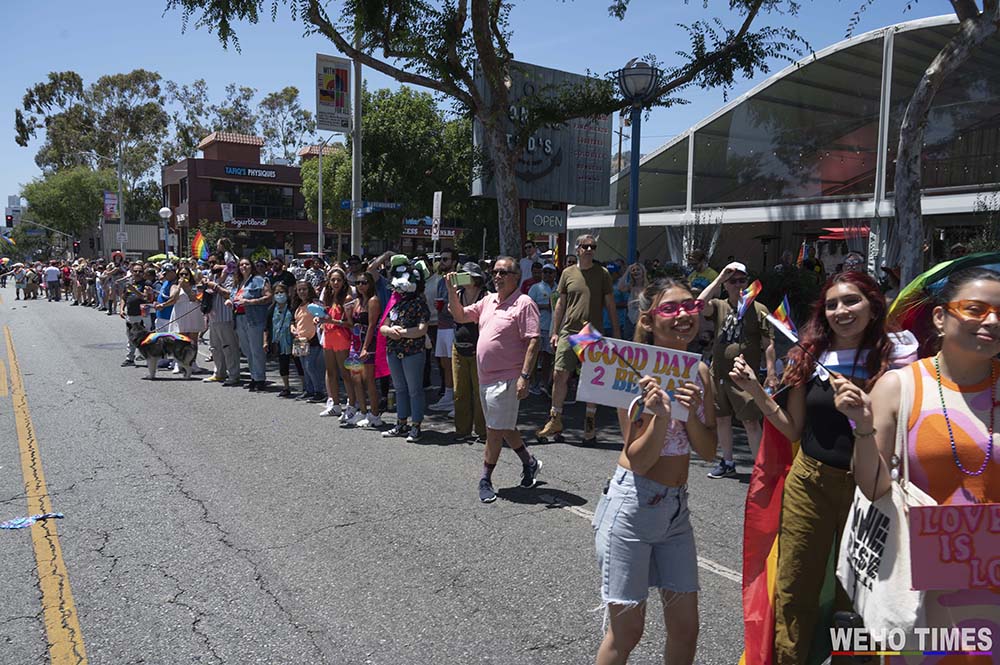 I’ve been around this planet long enough to understand that it is what it is, and it ain’t what it ain’t. I knew I was powerless over parade day, despite my efforts to scheme and scrape and try to control the outcome. People were going to show up however they were going to show up, if they decide to show up at all. I was completely surrendered to all of that. I braced myself for every disaster possible from my mother’s 2005 Ford truck breaking down on the parade route, to me being the only man marching, to straight-up having a widow-making heart attack on Santa Monica Boulevard that day. ANYTHING COULD HAPPEN! 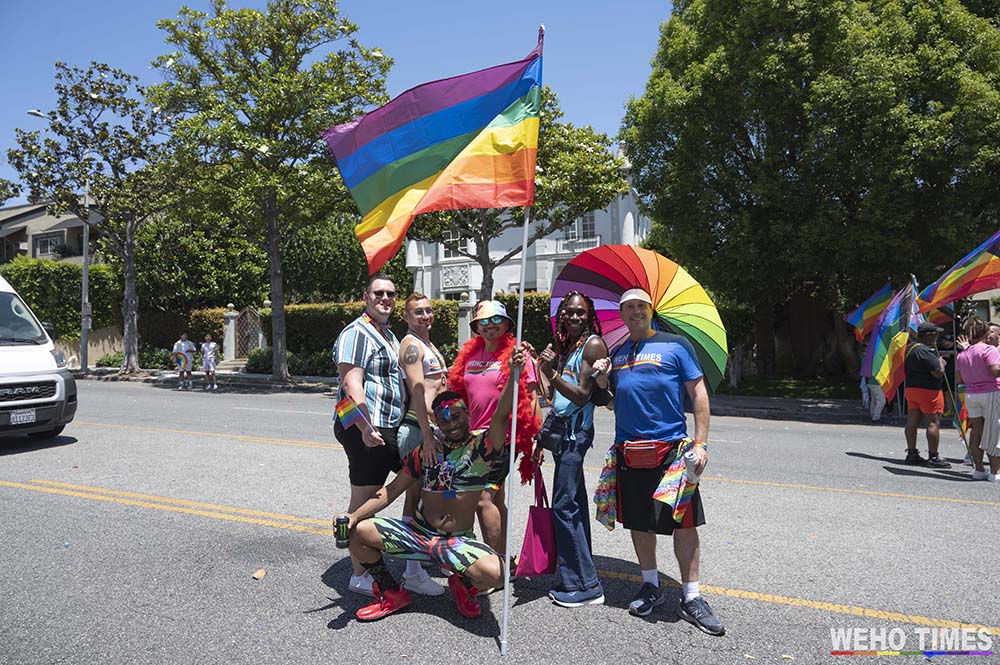 Despite my vow to surrender to the outcome, I also didn’t want to half-ass it. This is WEHO TIMES at the first ever WeHo Pride parade! We are WeHo! It’s in our name. I commissioned a large Rainbow balloon sculpture to cascade from the back of my mother’s truck to the top of the cab. I ordered large traditional rainbow and progress flags and attached them to 12ft pipes to a make dramatic statement about celebrating our past, but also acknowledging our younger generation’s progress colors representing LGBTQ+ diversity and a nod to our future. There were banners and postcards and we had pride pins and stickers to give away to the crowd. What was I not? Playing.

The plan was to have a banner wishing everyone a happy WeHo Pride, followed by the truck in full pride drag as the centerpiece, and us marching and dancing behind the truck.

However, come parade time, there was a disaster I did not see coming. The company who made my balloon sculpture delivered an arch with rainbow colors in it… but it wasn’t a rainbow. It was huge. A lot of work went into it. It was festive. But it ain’t what it ain’t and what it ain’t was a rainbow. The colors were a hodgepodge of the rainbow and I was supposed to display this abstract rainbow at a pride parade surrounded by rainbows. The woman and her assistant did not know the colors of the rainbow, or that the colors were in a particular order (we still have so much to teach). I almost collapsed right there on my driveway. 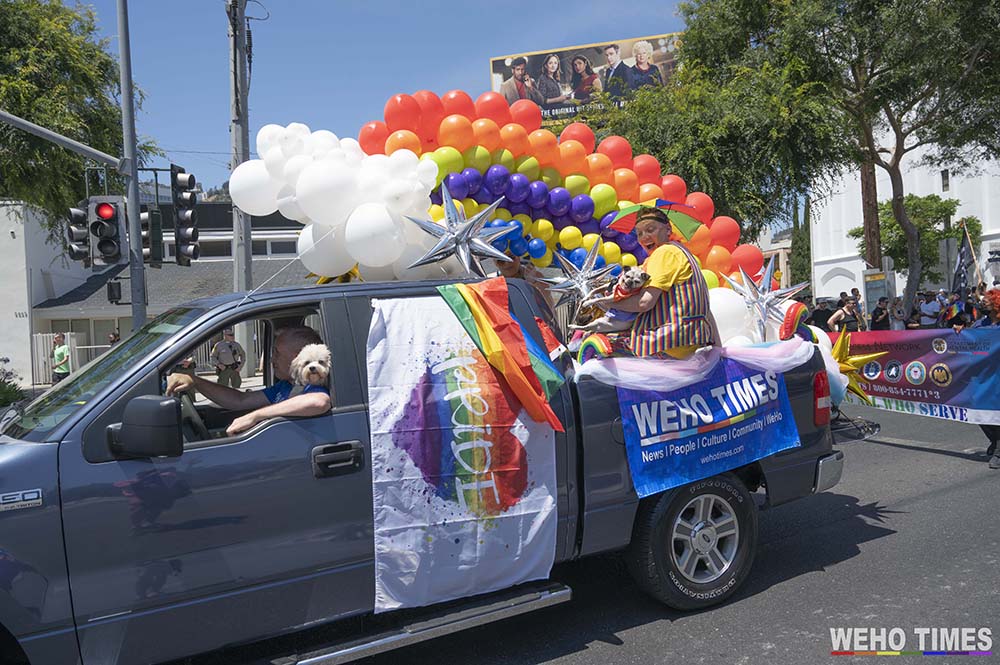 I’m not going to lie. My partner and my sister-in-law talked down from the ledge. I was ready to ditch it and half-ass it, but I had to surrender to the outcome and put the balloon arch on the back of my truck and prayed I didn’t lose it up Crescent Heights.

Getting to the parade was a royal nightmare. We were supposed to be there at 11 a.m., but didn’t not get to Crescent Heights, north of Santa Monica till 11:45 a.m. due to roadblocks and traffic. The parade was supposed to kick off at 12 p.m., but I already knew that was a bluff because KTLA 9 scheduled their live telecast programing from 1 p.m. to 3 p.m.

Once we were at our spot, the cancellation calls came in, which I was expecting.

Then the miracle happened. Men showed up out of nowhere to march with us. People I didn’t know wanted to be part of the parade. Some wanted to march in exchange for a WEHO TIMES t-shirt. And the very best part of it all is that it was diverse. We had Black, brown, Asian, trans, white, young, older, and my two dogs even rode on our little janky, yet festive float.

Thank you City of West Hollywood! Thank you JJLA! Thank you OUTLOUD! Thank you so much to everyone who cheered us on in the crowd. Thank you Kevin Chase, Dan Mryglot, Mike Pingel, Jerick Enclan, Fernie Rojo, Nancy Murillo, Kevin Alpert, Curtis Blue and RJ Holguin of My 12 Step Store for throwing us a pizza party afterward. Thank you to EVERYONE who showed up to be a part of community, to support this LGBT minority owned publication, and to spread some joy at West Hollywood inaugural Weho Pride Parade.

And thanks to my mother Elsa for lending me her truck and allowing me to drag it up for Pride. A long, long time ago, my mother told me to gather my things and leave her home after she found out I was gay back in 1991. She said she didn’t hate me, but she couldn’t have that in her home. I had made my choice and she couldn’t be witness to me disgusting myself or bringing shame to the family, “vete con Dios (go with God),” she told me even though she is not a religious woman. She didn’t talk to me for that first year when I was homeless crashing on a couch, so cut to this past weekend and that 2005 Ford truck had some great personal significance some 30 years later for yours truly. I love my mother. I know she loves and supports me.

THANK YOU ALL TO INFINITY.

Can’t wait to see you all on the parade route next year.