Authorities are asking the public for any information leading to the identity of a male tesla driver who is at the center of multiple violent road rage incidents in Southern California, including an incident that occurred in West Hollywood to a woman and her 93-year-old mother.

Several individuals have come forward with claims that they are victims of the attacks, many of the incidents have been captured on camera.

ABC7 Eyewitness News reports that a woman who wishes to remain anonymous out of concern for her safety, had a run-in with the suspect while she was in her car with her 93-year-old mother. The encounter happened in West Hollywood in June. She provided pictures showing the suspect and a valet driver involved in a violent physical altercation.

“The Tesla was coming into oncoming traffic,” the woman told Eyewitness News. “We confronted each other, and I said to him, ‘You can make it, just keep coming slow.’ And immediately, he went into some kind of psycho mode and starts screaming and motioning.” 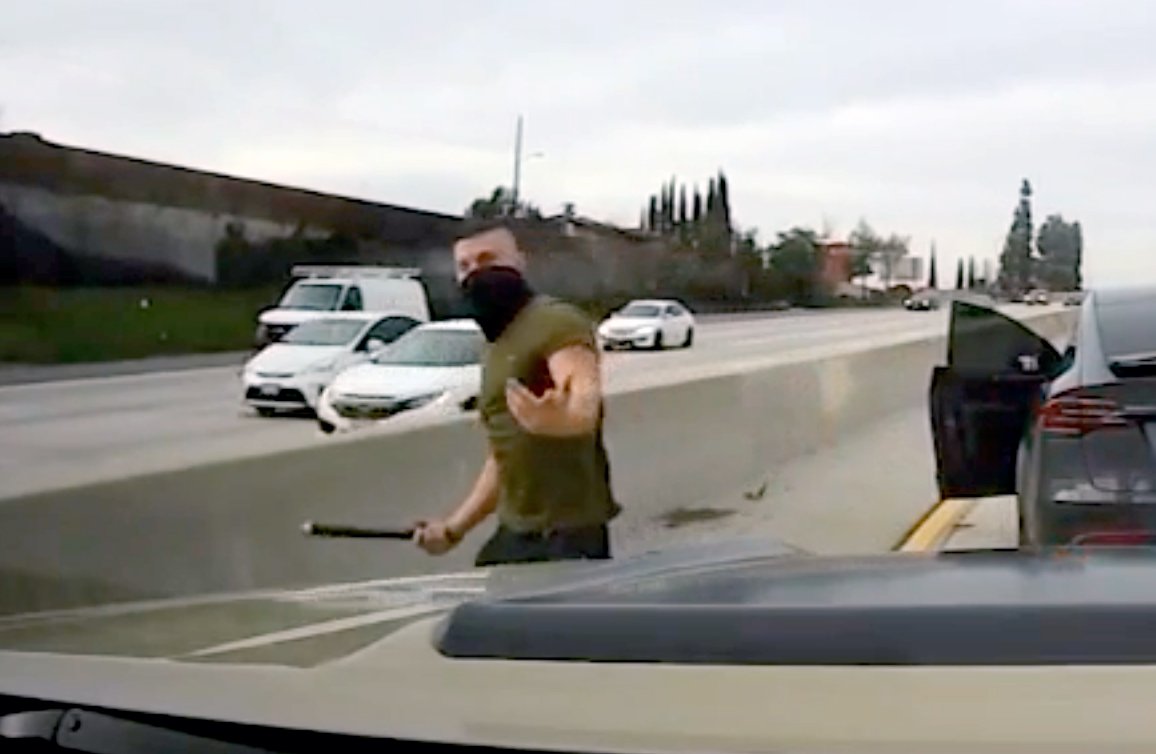 The man angrily got out of his car and threw a soda can at their car.

She said that a valet worker was punched in the face by the Tesla driver after he tried to calm the angry man down. The fight was caught by surveillance cameras, which shows the Tesla driver throwing something at the Valet worker and the valet driver fought back.

The woman said she filed a police report with the West Hollywood Sheriff’s Station.

According to Eyewitness News there have been 10 road rage incidents involving the same man. All the witnesses say they were harassed and threatened by a man in a dark Tesla

Crime Stoppers uses a three-part approach to preventing and solving crimes. The first part of the program is to empower the community by providing a safe way to report criminal activity. Secondly, Crime Stoppers partners with all forms of media in the Los Angeles region to inform the community on how to anonymously report crimes. Law Enforcement is the final part of the triangle; they follow-up on tips from
community members.

Ha, my money is on cop. Who else can drive around displaying no plate and engage in at least 10 video accompanying violent incidents? Only a cop. I’m sure his little cop friends are so worried about him they are choosing whether he should get suspended with pay and lay low for a year or move to another cop shop far away.

My money is on Russian residing in Petersburg, California who still thinks he is in St. Petersburg, Russia.

it is apparent this Tesla driver likes to confront other drivers in active traffic lanes.The photo of him in a freeway lane is especially idiotic.He better watch it or he will get hit by some passing driver who couldn’t anticipate what he was doing in a traffic lane.We will find out his identity after he is killed standing on a roadway

It would be just awful if one of the people he was accosting became so panicked at being attacked that their foot slipped off the brake and floored the gas.

when Teslas were new the drivers were mostly cool nerds and car buffs … and once they got popular they became the new black-colored Audi: driven almost exclusively by assholes … which is why the modern Tesla driver is what I call a Tess-hole

why can’t Tesla track which Tesla/owner was at a particular location at a day/time of any of these incidents? Case solved.

They can, but it’s bad for business to narc one of your own Tessholes.

The headline is totally false! No one has been identified. His identity is being SOUGHT. It has not been found. This head is click-bait.

Hi Charlie. Though his identity is not yet known, which is stated in the opening sentence, he has been identified as being the same person involved in various road rage incidents. And you should brush up on the true definition of clickbait. If you were reading about solar panels after the click, you may have a point. Thanks for reading.

The police could find this creep in 10 minutes if they put any effort into it.

If they do find him, they will likely do nothing to prosecute him.

ABOUT US
WEHO TIMES West Hollywood News, Nightlife and Events. The WEHO TIMES is an online news source covering the life and times of the City of West Hollywood. Featuring unbiased professional reporting and photo journalism, WEHO TIMES is updated daily, delivering the latest city news. The online publication founded in 2017, also features cultural events, people, politics, places, nightlife, and the history that make the City of West Hollywood the unique, creative city we all know and love.
Contact us: editor@wehotimes.com
FOLLOW US
© 2023 Murillo Media, LLC
wpDiscuz
12
0
Would love your thoughts, please comment.x
Comment Author Info
Report this comment