The fence surrounding most of West Hollywood Park is going down this week. A large portion of the fence on San Vicente came down this morning, allowing public access to most of the WeHo Park green areas. The fence by Robertson Boulevard is still up as of the publishing of this piece. The fence is being scaled back to surround the Aquatics and Recreation building, which remains closed until some time in April of this year. The kid’s play area is also sealed off from public use at this time.

A source tells WEHO TIMES the fence will be completely scaled back by this Thursday and the public will have access to San Vicente Boulevard from Robertson Boulevard directly from the park areas.

An area that is also open to the public is the Parallel Perpendicular Art Installation by Phillip K Smith III, which was completed some time in August of last year.

The City of West Hollywood is thrilled to announce that the new West Hollywood Park Aquatic and Recreation Center (ARC) will be opening soon,” reads a WeHo Park Update. “The anticipated date for completion and opening is April 2022.”

The ARC is now nearing final completion. The project has been subject to unforeseen delays related to the COVID-19 pandemic and supply-chain disruptions. The City is excitedly anticipating opening the ARC to the community.

Safety inspections and finishing touches are now in process for the new four-level 75,000-square-foot Aquatic and Recreation Center. The ARC will feature two rooftop swimming pools and a multi-sport court that will accommodate a variety of sports such as basketball, volleyball, and dodgeball. It will also feature five community meeting rooms and one conference room, Recreation Services staff offices, a Tiny Tot program classroom, a public access television studio, and lockers.

Soon, plans will move forward for the AIDS Monument, a collaboration between the Foundation for a National AIDS Monument (FAM), artist Dan Tobin, and the City of West Hollywood. The AIDS Monument will be located within the park’s expanded open space along N. San Vicente Boulevard. It will be a visually distinct and tranquil area to be experienced in many ways.

I hope drunk people don’t mess with that lovely mirrored sculpture. It is right next to all the bars!

Thank you for getting it done, and what a GREAT open space to rest, meet, greet and mingle! Very excited to see this project finished! Aquatics as well! Way cool. I will be coming there with friends, fun! Thank you! 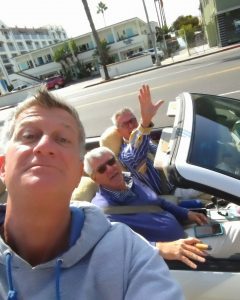