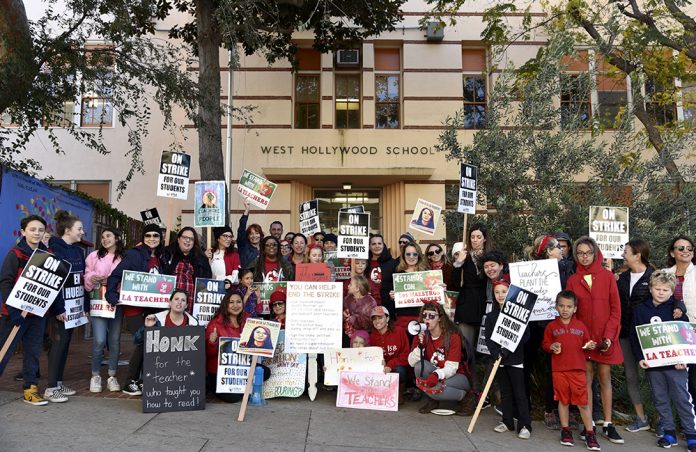 There was an outpouring of support for teachers at West Hollywood School during the United Teachers Los Angeles strike these past six days. Parents, neighbors and students stood in solidarity with educators at the picket lines, and local West Hollywood businesses stopped by to provide food and refreshments while protestors braved sheets of rain last week and heavy cold winds this week, during a strike that began January 14.

A group gathered outside West Hollywood School at 960 N. Hammond Street, on Tuesday at 7:30am, to face another chilly windy morning. The group wore their picket color red to represent their #red4ed slogan and held signs in support of students, public education, and their union in an effort to get a fair contract. The atmosphere, for the most part, was festive. Music was blaring, there was dancing, the blowing of whistles, and the crowd cheered whenever a car honked their horn in solidarity. 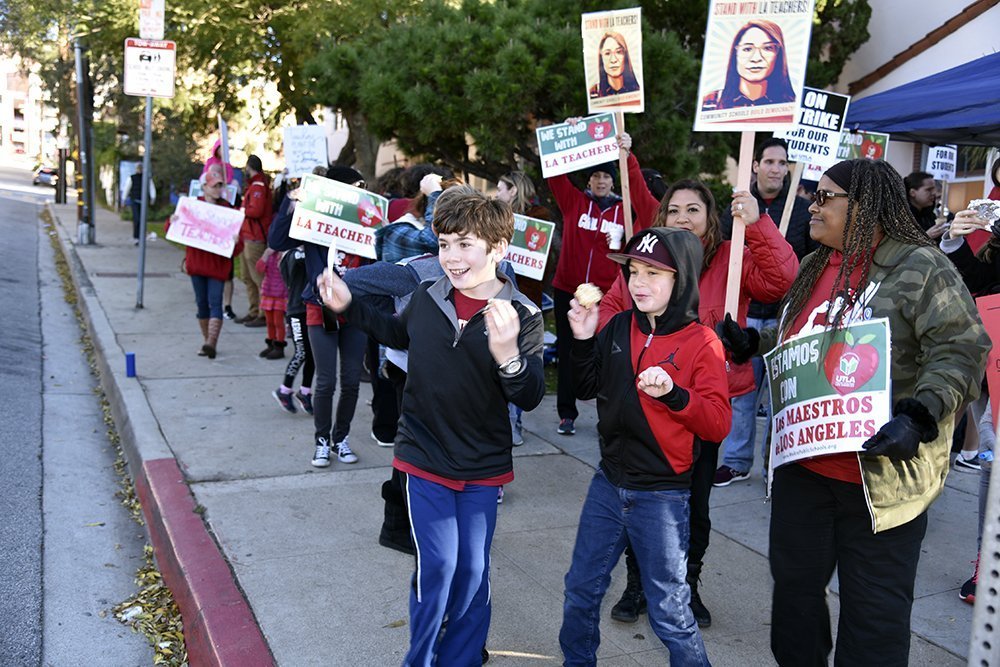 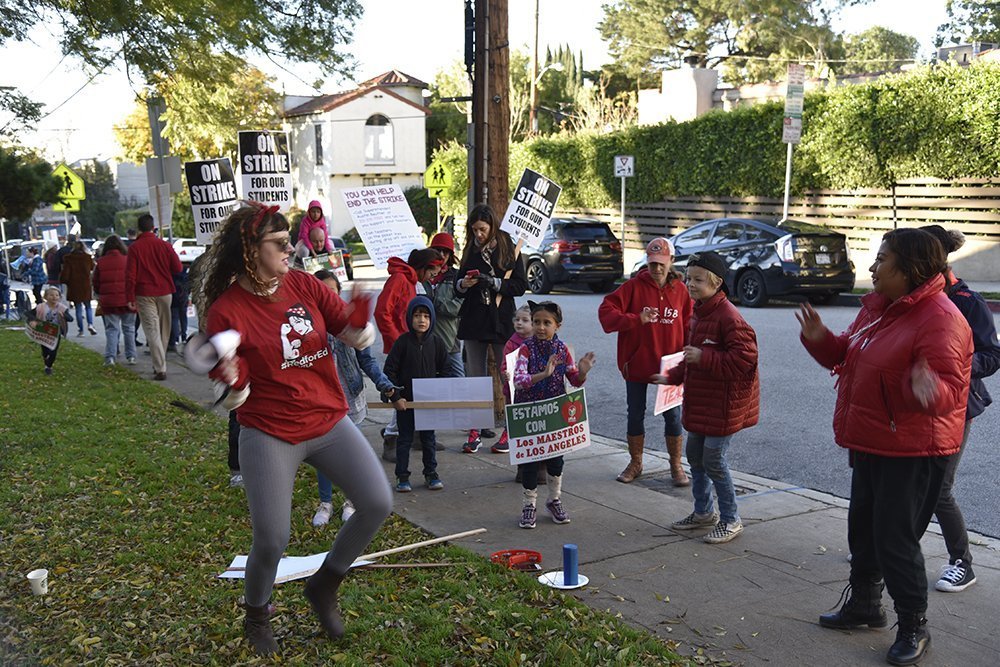 The protest this Tuesday would turn out to be the final day of the strike. I new agreement was reached according to a preliminary vote tally by members of the United Teachers Los Angeles union which enables teachers to return to work on Wednesday, ending a battle that left 600,000 students in limbo. Preliminary numbers from the vote show that a vast super majority voted yes, ending the strike.

“We’re ready to go back into our classrooms. We miss our students,” third grade teacher at West Hollywood School, Rachel Pando, told WEHO TIMES at the demonstration. “The response has been very positive. We’ve had parents come out every morning bringing us food and coffee. Montrose Hotel rolls out a cart with coffee, danishes and fruit. The London Hotel allows us to rest there and use their restroom and it has also provided food. We’ve gotten donations from the Veggie Grill, Bristol Farms. They’ve been feeding us. They honk for us and cheer us on.”

That morning, Lisa Rotondi, the owner of Organic Kids LA arranged an Uber to drop off some organic meals like hot burritos to feed the protestors. Organic Kids LA supports the school as much as it can at events like Teacher Appreciation Day. Rotondi’s son is a student West Hollywood School.

“The response really has been amazing from our community,” said Bret Alberson, a traveling visual arts teacher for the school district. “We’re asking for nurses, counselors and reduced class sizes. On the high school level, they have 45 kids in a class. That’s too many. In my position, I’m one teacher for 2,000 students over the course of the year. Other assigned counselors, are one 1, to 750. Art teachers are 1 to 200-plus, so that’s what we’re fighting for.”

Council member Lindsey Horvath attended the protest to show her support that morning. “I’m standing in solidarity with the teachers, the people we trust every morning to educate our kids, to keep them safe, and to help them grow and become adults that contribute to society,” she said. “It’s important that the people we trust get the resources that they need to do their job–that we reward them fairly and generously for the work that they do and that we value our education on all levels.” 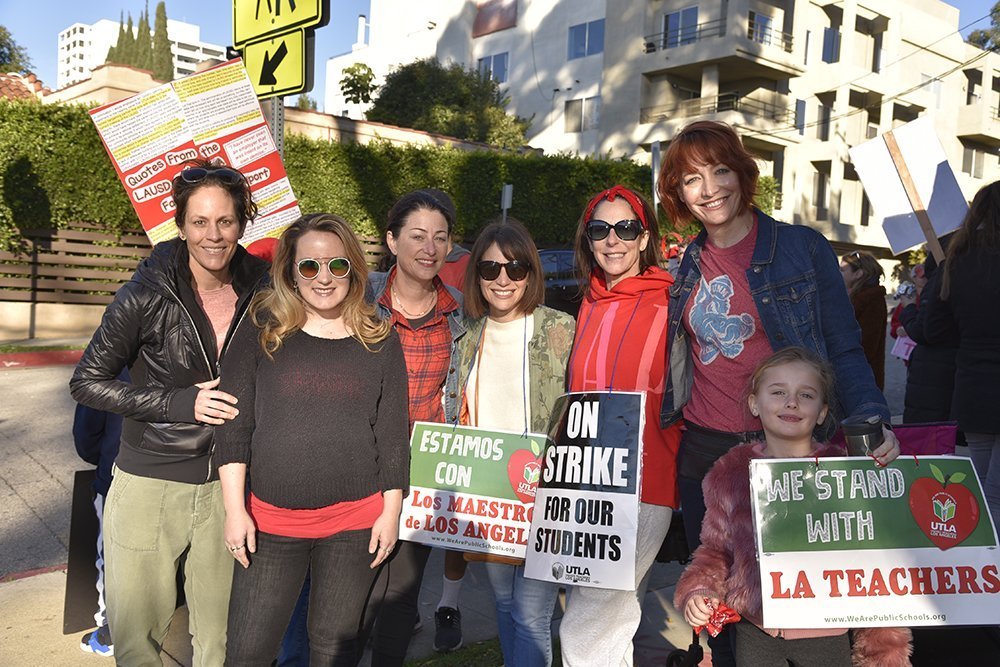 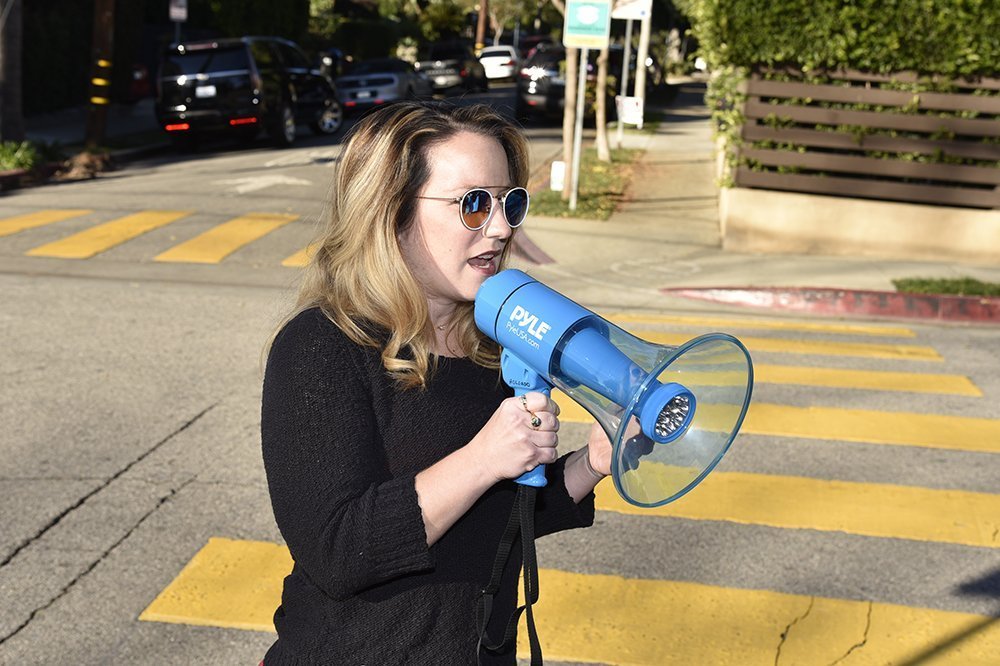 Horvath also acknowledged the support from the business community.

“West Hollywood always engages in issues of social justice and this is no exception,” she added. “I’m proud of the community for coming together and standing up for what they believe is right. I’m grateful to the business community who supported our local school and have supported this effort and have really gotten involved and engaged. This is who we are as a community. These are the kinds of things we should be fighting for.”

Union leaders and the Los Angeles Unified School District struck a tentative deal around dawn Tuesday after 21 hours of negotiating. L.A. Unified announced that it reached an agreement with UTLA on a new contract that provides a 6% salary increase for educators, reduces class sizes, adds a significant number of librarians, counselors and nurses, and maintains the fiscal solvency of the school district. 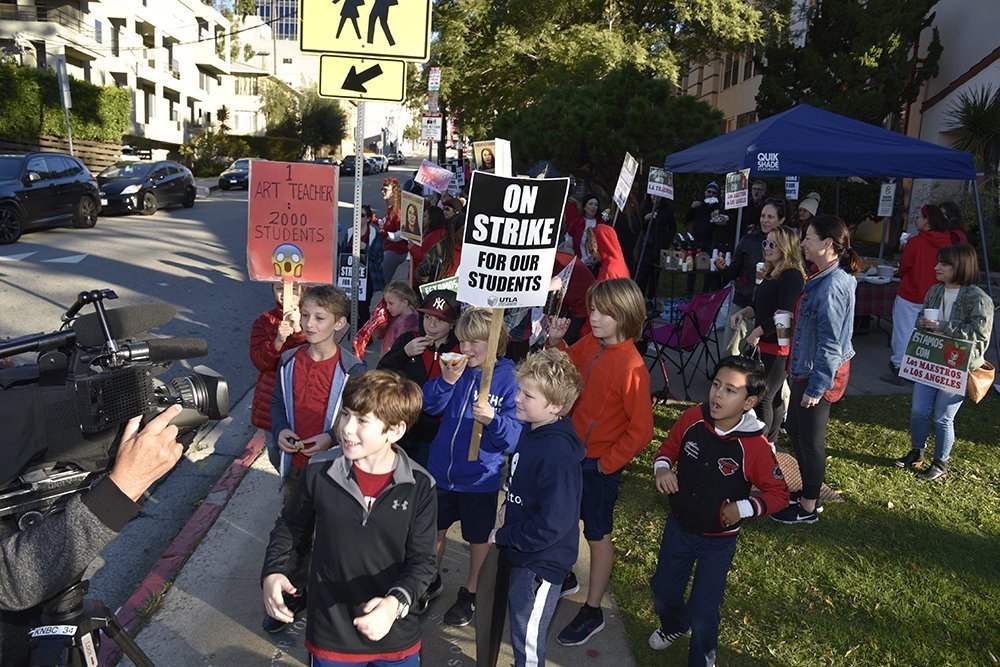 Teachers and students return to their classrooms at West Hollywood School on Wednesday, January 23, much to the relief of the neighbors in the area who will no longer be awaken by the whistles, the music, the honking and the cheering that would begin 7:30am.