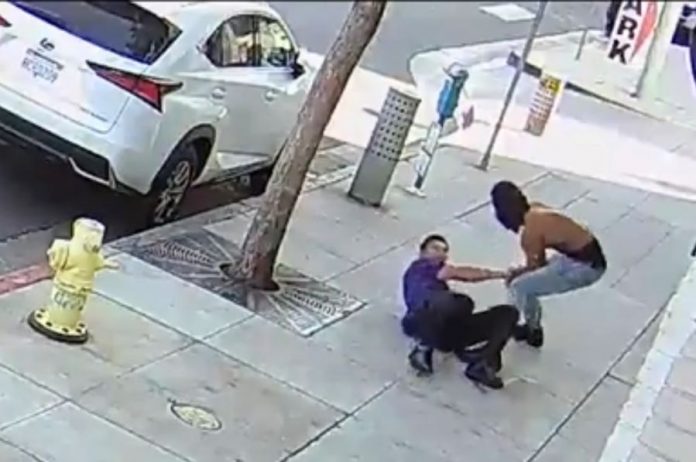 A victim was struck by a vehicle and then robbed at gunpoint in the 9000 block of West Sunset Boulevard and Doheny Boulevard on the West Hollywood side of the Beverly Hills gateway. The incident occurred this morning at roughly 9 a.m. Security camera footage captured the terrifying attack in a parking lot where an armed man is seen approaching the victim who ran away while a gun was aimed at him. A second suspect stepped out of a dark-colored sedan and chased after the man.

Later footage from the street shows the victim being struck by a moving vehicle. The victim was tossed in the air and rolled off the front of the car and onto the street. The man was able to get up and he collapsed on the sidewalk. The driver of the sedan rushed the injured man with what appears to be gun in his hand.

According to reports the suspect left his gun and a cellphone behind when he fled.

The vehicle, described as a gray 4-door Infiniti, fled eastbound on Sunset Blvd. Deputies are looking for the male driver and a female passenger.

The victim was taken to the hospital in stable condition. According to some reports a gold ring was taken from the victim.

Crime Stoppers uses a three-part approach to preventing and solving crimes. The first part of the program is to empower the community by providing a safe way to report criminal activity. Secondly, Crime Stoppers partners with all forms of media in the Los Angeles region to inform the community on how to anonymously report crimes. Law Enforcement is the final part of the triangle; they follow-up on tips from community members.

The Crime Stoppers program is funded by private donations and annual fundraising events. No tax dollars are involved. The reward money paid out by the program is from the fund raising and donations from concerned citizens and businesses.

It’s such a shame what is happening to our city.