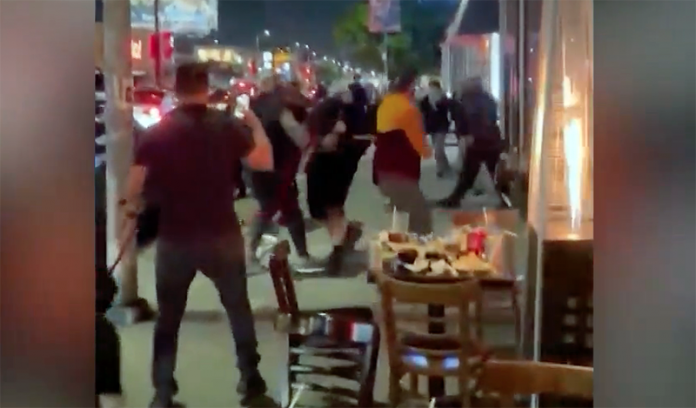 An arrest was made on Friday, May 21, 2021 for the alleged anti-Semitic assault on diners at Sushi Fumi this past Tuesday. Police say a man was taken into custody as a primary suspect for the attack that occurred in the Beverly Grove area. The incident occured just steps away from the West Hollywood city line.

KTLA 5 news reports that LAPD has determined there were five victims involved in the incident, which is being investigated as a hate crime. Tips from the public poured in, and investigators were able to identify one of the primary suspects. They tracked him at a home outside Los Angeles, according to a Saturday LAPD news release.

Videos posted on social media show a group of men yelling pro-Palestinian chants and waving Palestinian flags from their cars. They then targeted Jewish individuals at the sushi restaurant. They yelled anti-Semitic slurs at the diners. One of the diners yelled back at the group of men and a violent fight broke out.

According to video footage the group approached the diners. A man sitting at one of the tables picks up a rope pole to ward off the individuals. That man was then seen dragged toward a nearby car, pinned by the group, and punched.

One of the diners, who is not Jewish, told CBSLA that men in a caravan began throwing bottles at him and the group he was dining with. The man said he was physically attacked when he tried to defend the group. He said the men used anti-Jewish profanity. He said he was pepper sprayed during the attack and had to go to the hospital.

The suspects were described as white men wearing all black. They fled south on La Cienega Boulevard in a vehicle described as a black Jeep. The Sushi Fumi did not sustain any damage. CBSLA reports that according to police there were no major injuries reported.

The City of West Hollywood released a statement condemning the alleged anti-Semitic assault:

The suspect arrested has not been identified and no further details are yet available.

Anyone with information on the anti-Semitic assault is asked to contact the LAPD’s Wilshire Division hotline at 213-922-8230 or email WilshireMAC@lapd.online. Those who wish to remain anonymous can call Crime Stoppers at 1-800-222-8477.