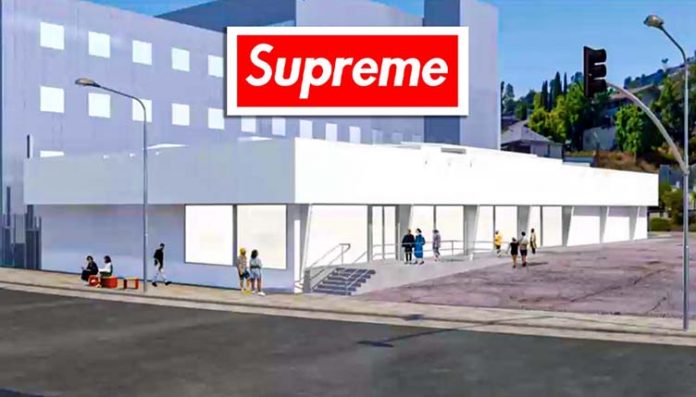 The ZOOM meeting was billed as Community Meeting this evening, to discuss a Supreme shoe store moving into the former Tower Records space at 8801 Sunset Boulevard. Community members were under the impression that they would have the opportunity to chime in about operations protocols, and express safety concerns they allege has been associated with the Supreme brand. However, Aaron Green of Afriat Consulting made it clear that they would only discuss construction of the building.

Green ran a straight forward process at the meeting which started at 5:07 p.m. Members were instructed to submit their questions, and he made it clear that only the questions in relation to construction of the Supreme shoe store would be answered. The chat portion of the ZOOM meeting was disabled and everyone attending the meeting was muted from engaging in the discussion. At one point there were 102 people on the Zoom meeting.

“I know there may be some folks who have questions about the operations of the business,” Green said. “That’s not the purpose of this meeting. With that said, I wanted to take a quick minute before we get into the construction of the project, to talk a little bit about some of the umm reports and commentary that I have seen in recent days about the proposed use of the site…I’ve been a little bit just sort of surprised and personally have been a bit concerned by the inaccurate commentary that I’ve seen recently, so just thought for the purpose of clarification, because I know there have some conversations about different things that may or may not be occurring in the store or outside of Supreme…”

Green stated that Supreme does not operate popup shops. Their stores operate as traditional retail locations with normal hours. He said there are not large-scale events that are thrown at Supreme and that they do not organize flash mobs or overnight customer operations at their locations. “In recent years, there have been a lot of efforts undertaken by Supreme’s management to dramatically reduce the lines that are outside their store that have in the past been generated by high demand,” he said. “Supreme stores maintain regular office hour; they keep their sidewalks clear; they do the cleaning, and when necessary, they’ll work with security companies to make sure they are in contact with local law enforcement.”

He added that Supreme handles their line with a system like Apple stores where customers can set up appointments to visit the store for crowd control.

Green then moved on to his presentation. He said the building will remain the same; the only difference will be that it will be all white. The windows facing Sunset Boulevard will be moved from the left to the right side of the building, close to the main entrance. And the parking lot will get some updates to comply with the American Disabilities Act.

The approximate construction timeline, which will be completed by August of this year, is as follows:
• February – March – Demolition at foundation.
• March – April – Foundation Work
• April – Demolition of roof level
• May – July – Interior Build-out
• April – Exterior Glazing
• August – Completion

Construction hours will be from 8 a.m. to 4:30 p.m. Construction vehicles will park on the site. The site will be fully secured with a construction fence around it that will be locked at night. They don’t anticipate street closures, but the sidewalk we be closed during some of the construction to install water lines.

The City of West Hollywood’s permit portal eTraKiT, lists Permit #B21-0757 was submitted on September 10, 2021. It is requesting a remodel for the new retail tenant, which include changes to the facade and raising 2,645 SF of roof by 3′-9″. Other improvements include interior renovations, and the installation of a sculptural artwork. That permit is still pending.

A resident asked if the small benches on the sidewalk would be removed, and the answer is that those benches will remain because they are City property.

A person asked about jackhammering during the day, and the answer is a yes. “We want to be transparent,” said Green. “There some noise, in particular as the parking lot gets removed. There will be some heavier equipment used, but it will be for a short period of time.”

Senior Vice President of Supreme, West Rubinstein stepped into the meeting to say his company looks forward to being good neighbors.

“I also saw some of the reports and some of the articles in the media and it’s a little frustrationg for us, because it is actually factually untrue. Somehow a lot of the very unfortunate incidents in Hollywood as of late have been conflated with the way Supreme operates. We pride ourselves on running safe, clean shops, not just in L.A., but in New York, and around the Country, and around the globe. We don’t do popups; we don’t do flash mobs; we don’t allow people to camp in our space overnight. We have a pretty developed system of allowing people to make appointments and we have a very regulated kind of line system, so customers can come in come out of the shop easily. Primarily we are focused on just the communities that we’re a part of… we’ve been here for 18 years. We have a very close relationship with our neighbors. We consider ourselves great stewards of our space, of our customers, of the community, and we’re looking very much looking forward to engaging with you.”

“The residents and myself felt really scammed as we were told it would be an hour meeting,” said West Hollywood resident Jerome Cleary after the meeting. “Aaron Green with Afriat Consulting started the meeting at 5:07pm and began to spin a new fairy tale story about how Supreme did not have the previous crime problems on their events at their Fairfax store or any other store. Then made us all muted at the very beginning for the Zoom meeting. We could not unmute ourselves. Then we could not submit questions throughout the typical Zoom chat window with questions that anyone in the Zoom meeting could see. We were made to only submit through a link to Google Docs and that we could only ask about construction.”

“We feel a trust had been broken as this was not really a neighborhood meeting for outreach in the community, but a completely censored Zoom meeting,” he added. “What does Supreme have to hide and why will they not be totally transparent?”

The meeting only ran for 23 minutes.

Green said all questions regarding the Supreme shoe store can be directed to his associate Tina Vartanian at tina@afriat.com or call 818-450-2774.

It takes some balls to bold face lie like they did last night. I have four teenaged nephews and they would debunk their assertion that Supreme is just a typical retail store running regular hours of operations. My nephews will tell you all about the big drops on Thursdays and the hype and the feeding frenzy and the ridiculous resale value these limited edition items create that can lead to problems on the street beyond Supreme’s control. But back to the construction of the building. It’s going to be white. Thank you for playing.

This city has become a joke.

I concur, what a disingenuous group! One question regarding whether the number of parking places have decreased was not answered either. It sure seems like they cut the meeting short and got out quickly – I think they would have been chewed up if they had properly opened the Zoom meeting to the public…cowards. I frankly felt gaslighted and fear the impact to the neighborhood considering how the Supreme store has affected the Fairfax district. Remember this milestone next time you go to vote in WeHo.