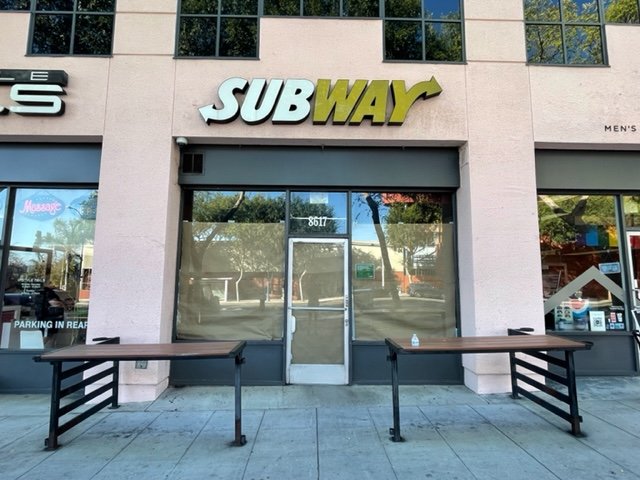 The Subway sandwich shop in West Hollywood, located at 8617 Santa Monica Boulevard has permanently closed. The WeHo location dates back to the early-to-mid 90s, possibly earlier. It had managed to stay afloat, despite the exchange of several hands throughout the past decades.

“This Subway Restaurant will be open through June 21st,” reads a sign at the window. “The restaurant will be closing June 22nd. We appreciate your business and invite you to visit us at of these locations near you: 8859 Sunset Boulevard and 9907 S. Santa Monica Boulevard in Beverly Hills.”

There is also a Subway Restaurant at Fairfax and Santa Monica Boulevard, at 1111 N Fairfax Avenue that is currently open.

The Subway at 8617 is located beneath Trader Joe’s. That shopping center has seen several closures during the pandemic, but also some recent openings which including places like Waxology WeHo and RioZona Acai, not to mention, the anticipated upcoming opening of El Pollo Loco.

It is not clear if this is the reason the familiar sandwich shop has thrown in the towel. Neighbors assess that one possible reason it closed is because rent is going up July 1st

We’re going to see more of this happening in the City Of West Hollywood. It is not business friendly city.

Burn it down before giving your employees fair pay. They tall Kerean guy that owned this place last was a real wretch. Not sad to see it go.

You own a Subway franchise? Sheesh.

Actually Subway franchises are a massive fraud on the franchisees rather like SCIENTOLOGY is a fraud on their mission holders. It is almost like indentured servitude. SUBWAY HAS MASSIVE PROBLEMS unrelated to our local economy as comedian John Oliver notes in this hilariously sad video: https://www.youtube.com/watch?v=jDdYFhzVCDM

Do the Subway employees get $50 a week if their stats are up?

Not everyone wants to follow the Commisar’s labor laws and will open under friendlier skies.

Nope, the SMB/Fairfax Subway is closing too. Rent increase which is why that Starbucks left too.

I just drove by there and it is most definitely open still.

I was there this weekend. There is a notice at the cash register that they are not renewing their lease and they will be closed as of July 1.

Yep I said is closing, not closed.

ABOUT US
WeHo Times West Hollywood Daily News, Nightlife and Events. The WeHo Times is an online news source covering the life and times of the City of West Hollywood. Featuring unbiased professional reporting and photo journalism, WEHO TIMES is updated daily, delivering the latest city news. The online publication founded in 2017, also features cultural events, people, politics, places, nightlife, and the history that make the City of West Hollywood the unique, creative city we all know and love.
Contact us: editor@wehotimes.com
FOLLOW US
© 2022 Murillo Media, LLC
wpDiscuz
10
0
Would love your thoughts, please comment.x
()
x
| Reply